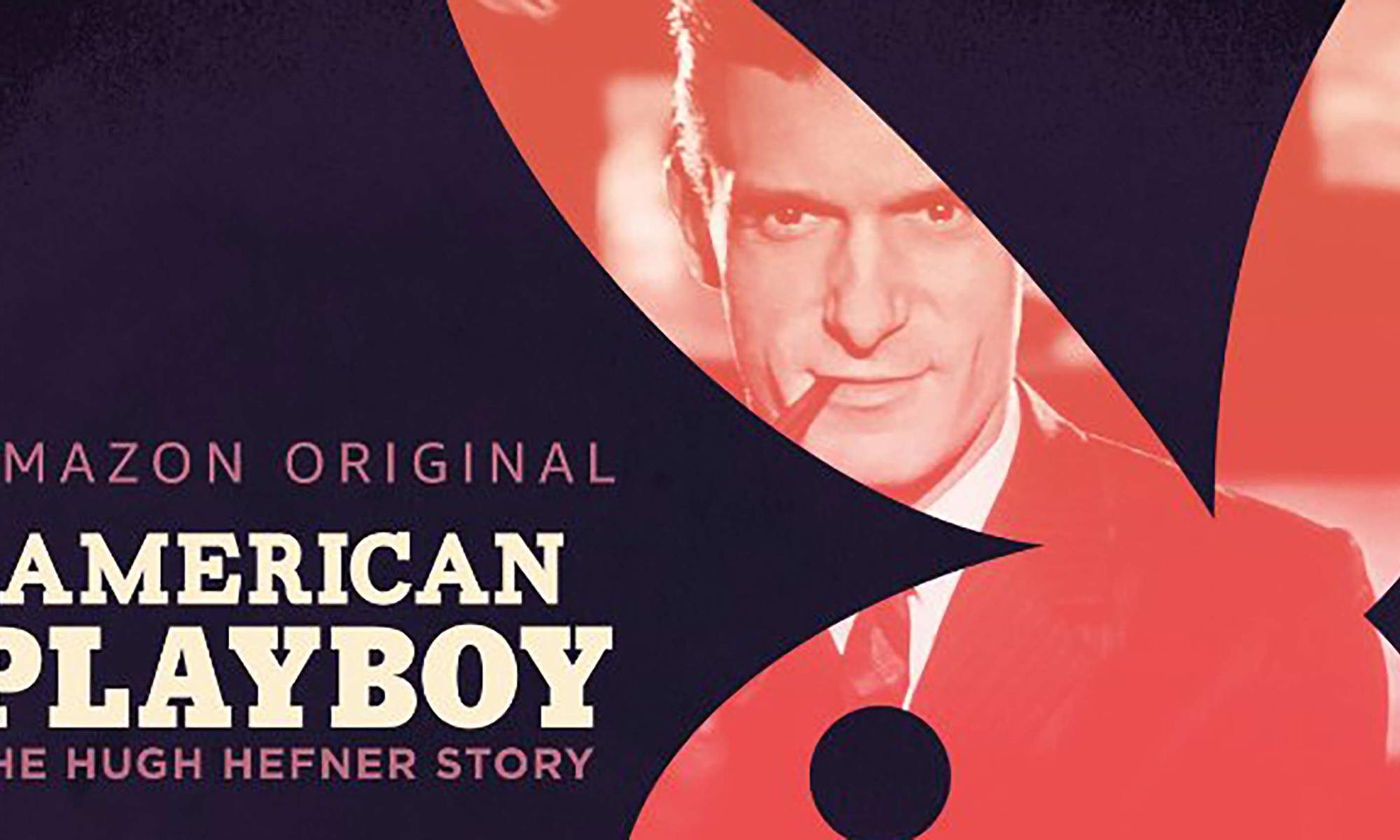 Amazon’s new docuseries American Playboy: The Hugh Hefner Story is one gigantic ego stroke. Not quite full-blown documentary, not quite prestige drama, this hybrid series combines plenty of talking heads and archival footage/audio with cinematic recreations in which an actor (Matt Whelan) playing Hugh Hefner both narrates and acts out his life (even though he looks and sounds like nothing like Hef) opposite other actors playing all of the important figures in the history of Playboy. It feels like the work of people who wanted to give the ole bathrobe enthusiast one last pat on the back now that he’s entered his ninth decade of life and probably won’t be around much longer. Based on the frequency with which Hef’s 26-year-old son (and current face of Playboy) Cooper appears as a fawning talking head, it likely also serves to prop up a brand which has lost a bit of its prestige in recent years (e.g, the dizzying array of bare breasts in the opening minutes feels like Cooper personally apologizing for the magazine’s recent failed attempt at dropping nude pictorials).

So, we are told (and shown) over and over again just how much of a visionary Hef really was, how he did what no one else dared and built an empire off of his success, making him a living embodiment of the American Dream. American Playboy’s treatment of his more transcendent moments, however, sometimes borders on hagiography, such as imbuing the scene in which Hef and the gang first came up with the idea to have a fold-out centerfold with such awe you’d think they just discovered the cure for cancer. Plus, you have to consider the source. Everything we are told seems to be coming from people already sympathetic to Hef, such as family members, former co-workers, famous fans like Brett Ratner (ugh) or Gene Simmons (double ugh) and the occasional biographer.

But, really, American Playboy is not the type of thing you watch for the quality filmmaking. If you did you’d find it maddening how often the docu- and drama- halves of the series awkwardly intersect with scenes of fake-Hef literally looking at a picture of real-Hef or watching real-Hef on TV and not noticing the obvious difference. No, American Playboy is something you watch because it’s preferable to reading a Hugh Hefner autobiography or biography. And for anyone unfamiliar with the history of Playboy but a general interest in the history of pop culture there’s plenty to chew on here, especially since the voice over frequently stretches itself to place Hef’s actions in a historical context.

I have now made it through the first 3 episodes (there are 10 total), which roughly take us all the way up to 1961 and the debut of Hef’s first TV show Playboy Penthouse and divorce from his first wife, Millie. Here are 10 things I learned:

1. This could have all been avoided if Esquire had simply given Hefner the $5 raise he demanded 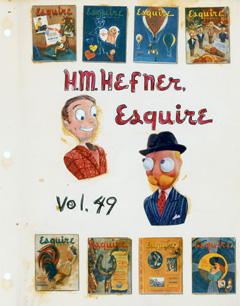 Esquire was the first true men’s magazine to cover all things men might be interested in, not just hunting or fishing. A young Hugh Hefner was an avid reader and particularly enjoyed the sexually suggestive cartoons and pin-ups. However, by the time he graduated college and got a job at Esquire as a copywriter the magazine had become highly sanitized, dropping most of the things he loved about it in the first place. Disheartened, he asked for a $5 raise, but was turned down. He promptly quit, and supported his family copywriting for another publication while planning to create his own magazine which could be a better version of the Esquire he remembered from his youth. His version of Esquire wouldn’t just include suggestive drawings of pin-ups; it would actually have nude (but classy) pictures of real women.

2. The money to fund the first issue of Playboy included a loan from Hef’s conservative, Methodist mother 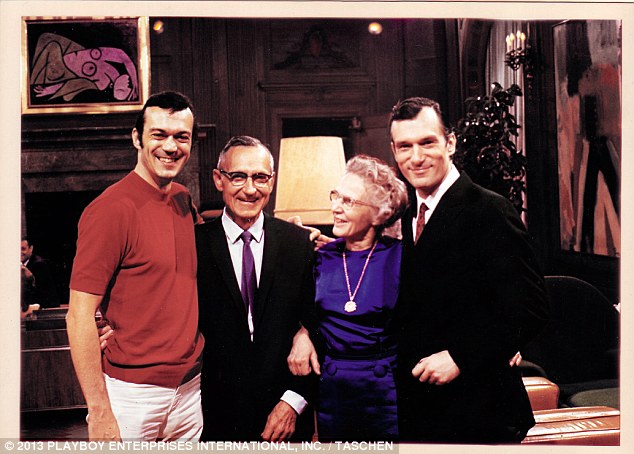 In the beginning, Hefner’s new magazine was a three-person job, with Hef creating all of the copy, graphic designer Art Paul providing the visuals and Eldon Sellers handling sales. They put it together out of Hefner’s own Chicago home, and scrounged up $8,000 from 45 investors, most notably Hefner’s own mother. She gave him $1,000. Even though she had no interest in ever reading his magazine she believed in her son. Hefner’s brother, Keith, and neighbors also invested, but to make up the final $600 he had to sell his furniture.

3. The first issue included a nude photo of Marilyn Monroe 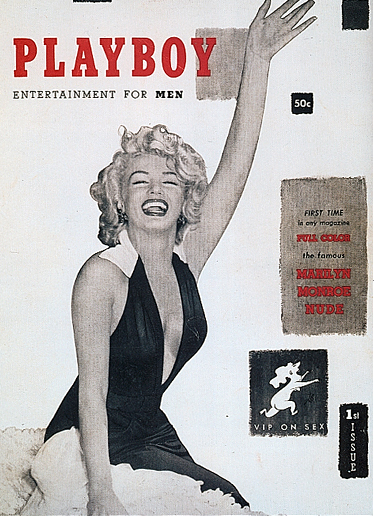 With such a small budget, there was no way they could afford to photograph a model themselves. However, having a nude photo of a woman was their primary drawing point. This left them with no other option than purchasing the photo from a calendar publisher, but Hef was determined to find the right girl and didn’t see her in any of the pictures of topless calendar models available to them. Then fate intervened when news broke that Marilyn Monroe had posed topless for a calendar photographer back before she had changed her name and become a star. Moreover, the photographer was based in Chicago.

With only $1,000 left in the budget, Hefner was uncertain if he would be able to buy the photo off of the photographer. Luckily for him, the photographer only asked for $600, which Hef haggled down to $500. Notable absent from this transaction was Ms. Monroe herself, who had signed away the rights years prior. Her tits, to be blunt, helped launch Playboy, but she and Hefner never actually met.

4. They were this close to calling it Stag Party instead of Playboy

Before he ever had collaborators or a budget, Hefner knew the title of his magazine was going to be Stag Party, and that name stuck all the way until the point of them putting finishing touches on the first issue. Then they received a cease and desist letter from a hunting magazine called Stag. With only a week before their deadline, they were forced to massively revise their first issue and come up with a new title.

5. The Playboy name actually came from a car 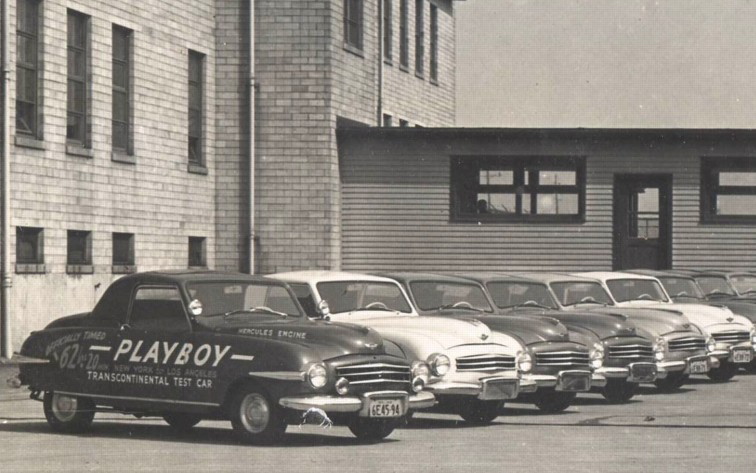 And that new title didn’t come from Hef. Instead, it was suggested by Eldon Sellers, who remembered it as the name of a Detroit sports car company his mom had worked for. They all liked the title, and quickly moved forward with editing the first issue.

6. Picking a bunny as a mascot was partially due to their rushed timetable

Their prior mascot was a deer (for the Stag in Stag Party), and picking a bunny allowed Art Paul to re-animate the mascot by simply redrawing the face. Thus, they finished revising the first issue time to launch 70,000 copies to newstands in December 1953. Incidentally, several years later Paul designed the iconic Playboy logo, which has remained largely unchanged in the half-century since.

7. The Playmate idea was inspired by something Hef had done at his college newspaper 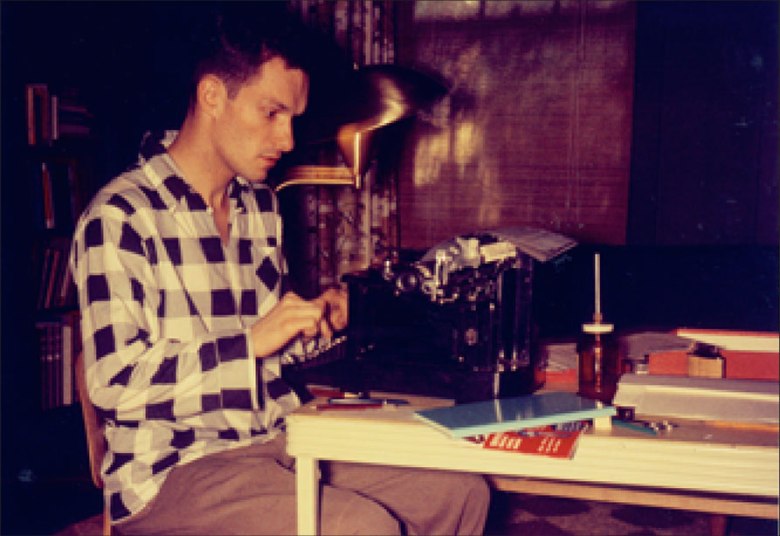 The first issue was a massive success, but Hef was racked with fear about whether or not a second issue would sell. After all, they didn’t have any more pictures of Marilyn Monroe to hawk. What would their hook be now?

Inspiration surprisingly came from the past. Hef recalled his younger days when he launched a Co-Ed of the Month column at his college newspaper Shaft Magazine. These columns always included a brief bio of the girl alongside a glamour photo of her, and a similar photo usually graced the front cover.

Why not do the same thing again with Playboy? Instead of “Co-Ed of the Month” call it “Playmate of the Month.”

That’s exactly what they did, and a calendar girl named Margie Harrison became the first Playmate, Miss January 1954.

8. The first model they photographed in-house was a female employee Hef was sleeping with 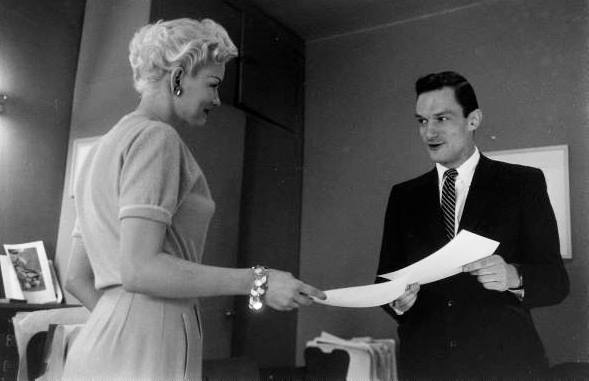 As Playboy explored in popularity, Hef quickly needed a larger staff, including more writers, an actual editor, various office staff and someone to handle all the requests for subscription. The latter task fell to Charlaine Karalaus, who only ever interviewed for the position at the prodding of a friend who wanted both of them to go interview together but then backed out at the last minute.

Before long, Hef was so focused on growing Playboy’s popularity he started living at the office at least 2-3 days a week. The escape from his wife and young daughter eventually led him into more of a bachelor lifestyle (even though he’d only ever been with his wife and one other woman to that point). Thus, after nearly a year of working together Hefner and Karalaus began having an affair. Independent of that, she suggested in a routine business meeting that they should stop purchasing their photos from calendars and start producing their own. She wasn’t volunteering to pose for the photos herself, of course, but Hefner seized on the idea, convincing her to do it as a lark and pose under a pseudonym he came up with: Janet Pilgrim.

The popularity of the spread and of Hefner’s corresponding bio identifying her as one of the girls handling the phones and subscriptions in their office established a new identity for Playboy Playmates: the girl next door. It was a model they took and ran with for years. Charlaine posed two more times, and continued working for the company for at least a decade. Despite countless outside offers, she never posed for anyone else.

9. It took bombing on national TV for Hef to change his public image into that of a dapper, pipe-smoking bachelor 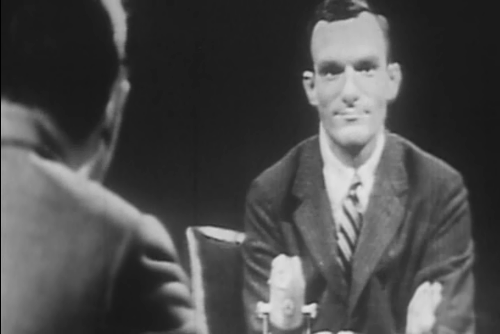 Within three years, Playboy’s subscription numbers exceeded Esquire’s, but not everyone was amused. Hefner met one such person when he went on Mike Wallace’s talk show Night Beat. It was Hef’s first national TV interview, and he agreed to go on due to his recognition of the growing power of television and the inherent potential to expand Playboy’s brand. However, Mike Wallace tore him apart, leveling accusations of exploitation and lowest common denominator salesmanship and getting only stammering answers in response. Wallace was so unimpressed with the man before him that he joked between commercial breaks that he looked forward to seeing what he’d be doing for a living in 5 years, clearly assuming Playboy wouldn’t last under the guidance of such a rank amateur.

Thus began Hefner’s public image make-over and media training. He modeled his new fashion sense off of Frank Sinatra and James Bond, took to smoking from a pipe and agreed to be interviewed by any publication that would have him, better preparing him to answer the tough questions. 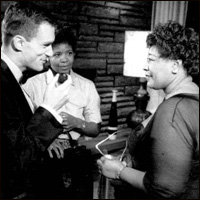 After Hef’s post-Night Beat media onslaught, a Chicago-based TV producer pitched him the idea of hosting a variety show, which he chose to be a live-action continuation of the fantasy lifestyle preached in the pages of the magazine. Thus, Playboy’s Penthouse would be an intimate window into a night party being thrown and hosted by Hef himself. For the first episode, Hefner, a jazz lover, wanted to include Nat King Cole and Ella Fitzgerald, let them interact with fellow guests like Lenny Bruce and the latest Playmates of the moment. Predictably, the TV stations in the South refused to air the episode if Cole and Fitzgerald were a part of it, but Hef didn’t back down. The show debuted in October 1959 without the benefit of the South, but still turned into a big enough hit to run in syndication for 2 seasons.