I had no idea Sigourney Weaver was in Chappie until she went on The Daily Show last week. In fact, when John Stewart mentioned her name at the top of the show I assumed she was either there for some kind of play or to discuss the new Alien movie she is going to make with Neil Blomkamp. Oh, I knew all about that Alien movie, having observed all the headlines and browsed through a couple of articles. First, Blomkamp released concet art through Twitter and officially announced on his own that he’d be making the next Alien movie. Then Blomkamp and Weaver appeared to indicate in an interview that their new Alien movie will pull a Superman Returns on us and choose to merely honor the Ridley Scott Alien and James Cameron’s Aliens, retconning any of the other Alien movies out of existence. That was followed by Blomkamp promising that’s not exactly what they’re doing, which was confused by follow-up speculation about Aliens’ Michael Biehn potential return even though Alien 3 killed his character off in the first couple of minutes.

I found all of this remarkably annoying (e.g., Why can’t we just let the franchise die? Ripley’s story is over, Whatever happened to that Prometheus sequel?) until remembering that there’s no real good reason beyond nostalgia for me to be as excited about the new Terminator movie as I am. As such, I don’t really begrudge anyone who can’t wait to see what Blomkamp and Weaver pull off. However, when I was reading about all of this Chappie very rarely came up.

That’s a problem. Now that Chappie has arrived and flopped with just over $13m, a couple million shy of industry expectations, it kind of seems like all the publicity surrounding Blomkamp and Weaver’s forthcoming Alien partnership completely overshadowed the movie they were meant to be promoting. Fox is probably pretty happy about that because this has all been completely free publicity for their Alien franchise. Sony, on the other hand, is likely more than a little annoyed since they have nothing to do with Alien. They probably really hoped Blomkamp could turn Chappie into a District 9-sized hit, although at this point they’d kill for that $30m Elysium opened to two years ago.

All of this business with the teased magic re-set button Alien movie went down in the weeks leading up to Chappie’s release. That should have been the time for Sony’s big final push. Instead, the news cycled was dominated by a 36-year-old franchise which hasn’t had an installment everyone really loved since 1986 possibly getting a sequel. Yeah, but that has an inherent marketing hook and screams clickbait article titles. Trumping for an R-rated original sci-fi film like Chappie is a far more challenging prospect, especially since Elysium seems to have seriously damaged reputation. Somehow, him going out there to admit he totally dropped the ball with Elyisum seemed to make it worse for some people. It’s possible that Blomkamp sensed he had a bomb on his hands with Chappie, and wisely used the time before its release to secure his next gig.

Remember when Robert Downey, Jr. spent a week last year talking up the possibilities of doing Iron Man 4? Do you remember why he was actually talking about that? Because his movie The Judge – the first film from his new production company, Team Downey, run by his wife – was about to open. He wanted to directly leverage his Iron Man notoriety to get us talking about him again in the hopes that any Iron Man 4 talk would also include some reference to The Judge. Well, that’s part of the reason. He also dished about Iron Man 4 because everyone kept asking him about it while he was going dang near everywhere to promote The Judge, and his whole “It’s up to Marvel, not me” was a likely effective negotiating tactic. Either way, it didn’t really work out so well for The Judge which managed a mere $83m worldwide after costing $50m to make, overshadowed at the box office by last October’s other adult-oriented, R-rated drama, Gone Girl.

It’s an old marketing trick to enhance the awareness level of your film. To a film obsessive like myself, I needed no bogus reminder that Downey had a new movie coming out. However, for more casual viewers getting The Judge attached to a trendy news story regarding a hypothetical Iron Man 4 was just another method of increasing your points of exposure, especially since it forced certain sites which wouldn’t normally mention The Judge at least throw in a token reference. The problem is all that really does is raise awareness, not buzz, and in the case of The Judge once it arrived to “it’s okay, not great” fan reactions the battle for word of mouth was over. Within weeks of The Judge’s release, Downey, Jr. was perhaps not coincidentally storming a theater stage in Los Angeles alongside Chris Evans, Kevin Feige, and others to announce that Iron Man would be in the next Captain America movie.

This type of thing happens all the times for actors who are known for beloved franchises but are out there promoting something totally different, like Johnny Depp going out there to plug Rum Diary and getting asked countless questions about Jack Sparrow. One can easily overshadow the other, and that definitely happened to Chappie with the Alien business. Is that the only reason it failed? No, Sony’s trailers made it look like a mish-mash of things we’d already seen before, like Short Circuit meets Robocop with a District 9 design aesthetic. They heavily emphasized “From the man who made District 9” which is not the best approach as it seems as if that film has gone through a unfavorable critical re-appraisal in recent years. Plus, after Elyisum there is a certain “We won’t fall for that line again” effect. And, ultimately, there seemed to a total lack of influential people telling us this was worth seeing in theaters.

Incidentally, when Sigourney Weaver did come out for her Daily Show interview she stayed on topic the whole time, not forced by John Stewart to answer a single question about Alien. It was 100% about Chappie, yet the entire time I kept waiting for her to talk about it. 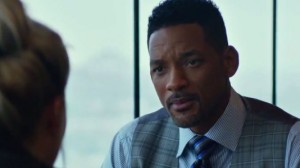 This is a drop of around 46% for this little-loved, not-exactly-hated Will Smith/Margot Roggie romantic drama, which is now on path to close with as much as $60m domestic. Add in the international market and this movie will be likely go down as a financial success. It’s just not a box office smash. 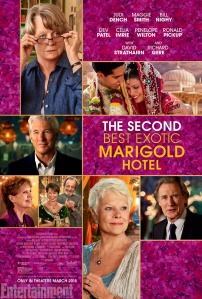 Oddly, this is the second Dev Patel movie of the week after Chappie. Second Best opened in just over 1,500 theaters, which is more theaters than its predecessor played in during its entire run. As such, comparisons are hard to come by. It doesn’t mean much to say that the first Best Exotic Marigold Hotel did earn a little over $6m in its first weekend of wide release since it was a platform release which had been out for a while. The rule of thumb for older-skewering releases applies here as well: this figures to hold up well in coming weeks since older audiences are less prone to feel the need to rush to see something in its first weekend.

For as much as box office milestones have any kind of significance anymore, 50 Shades of Grey reaching the $500m worldwide mark is considered kind of a big deal. R-rated movies aren’t supposed to do that kind of business anymore, although that hasn’t stopped American Sniper.

The Blumhouse model is to make genre movies for $5 million or less, and then spend the $20 million or $30 million needed to release them in theaters only if they have a shot at selling at least $25 million worth of tickets. According to that business model, it’s looking like Lazarus Effect may ultimately just barely validate its theatrical release. It only dropped around 50% this weekend, a fantastic hold for a thriller/horror movie, which now gives it a fighting chance to make it to $25m.

Adapted from a novel written by an actual high school senior, The DUFF has nicely overcome the general ickiness of its premise (a girl finds out she’s the Designated Ugly Fat Friend of her social circle) to turn into a likely profitable film, the first traditional high school comedy to make any kind of noise at the box office since Easy A ($58m domestic) in 2010. 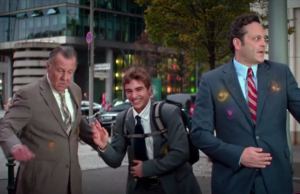 And this is finally rock bottom for Vince Vaughn’s film career. You might have thought it happened when 2013’s The Delivery Man and its $26m prod. budget limped out of the gate with a $7.9m opening before rebounding enough to ultimately make it to $51m worldwide. Unfinished Business is even worse; it’s the lowest debut for any Vince Vaughn film to open in at least 1,000 theaters. After the recent misfires from movie stars like Johnny Depp and Will Smith, you could look at this downturn in Vince Vaugh’s career as being another indication of the death of the film star, at least the way we thought of film stars in the ‘80s and ‘90s. However, in Vince Vaughn’s case it’s more of a case that he’s simply made too many crappy movies with not nearly enough variety in the types of characters he played since 2005’s Wedding Crashers. The failure of Unfinished Business seems to validate his decision to take part in the upcoming season of True Detective, playing a far more dramatic character for a complete change-of-pace.