There’s a weird thing right now where all of Hollywood wants writer-directors Phil Lord and Christopher Miller (22 Jump Street, Cloudy with a Chance of Meatballs 1, The Lego Movie) to make all of their franchise films, or at least the ones The Russo Brothers are too busy for.  Sony and Warner Bros were recently fighting over Lord and Miller, Sony tempting them with the Channing Tatum-led Ghostbusters and Warner Bros. countering with The Flash movie starring Ezra Miller. It appears as if WB might have won since according to Deadline Lord and Miller are officially on board to pen a story treatment for The Flash with the option to direct. That seems to be the kind of thing they’re doing a lot of lately, though, writing treatments and producing without actually directing. At one point, they explained they had been turning down directing gigs because they were flat exhausted from the grind of franchise filmmaking. For now, they’re managing to stay behind all of the Lego Movie spin-offs, a potential 23 Jump Street, the TV show The Last Man on Earth, and now The Flash. Their last major directing gig was actually the first 2 episodes of Last Man on Earth.

Even so, at least having them a little involved with The Flash should be great news. Their involvement suggests that WB may finally be willing to interject some desperately needed humor into its still young live-acton DC cinematic universe. As The Dissolve joked, quoting the version of Batman from Lego Movie, “No more ‘darkness, no parents, super rich’ navel-gazing? Sold!”

But there were three guys who were previously hired to write a Flash screenplay around four years ago, at which point it was supposed to be the next one in production after Green Lantern. That was a far more innocent time, back before any of us had actually seen Green Lantern. Those guys were Marc Guggenheim, Greg Berlanti, and Michael Green, with Guggenheim describing the script as “part thriller, that forensic, cool, Seven, Silence of the Lambs; Part superhero movie and part sports movie because there’s an athleticism to this character that other superheroes don’t have.”  Obviously, their script never got produced, but Guggenheim and Berlanti partnered with Andrew Kreisberg to create Arrow. Then Berlanti and Kreisberg partnered with Geoff Johns to create The Flash, using TV to do everything they wanted to do in the movie. As a result, the idea of some Flash movie due out on March 23, 2018 and starring someone other than Grant Gustin just seems so far away and ultimately redundant.

It’s not just that we already have a version of The Flash, and that little kids are telling Grant Gustin at conventions that he’ll always be their Flash, although that doesn’t help. After all, we already had a TV Clark Kent thanks to Smallville when Brandon Routh’s Superman came around in Superman Returns.  But when Smallville and Superman Returns co-existed they were giving us two very different products, Tom Welling’s Clark still stuck wearing red and blue color-coded clothes, living at home in Smallville, and mooning over Lana Lang and perpetually confused if Lex Luthor was his friend or enemy. By contrast, Brandon Routh was Superman in exactly the way we’ve always known him on film, Metropolis, Lois, actually gets to wear the suit and fly, etc. Welling didn’t get to do that until the finale of the tenth and final season of Smallville. That’s a long damn time for Clark Kent to not be Superman. 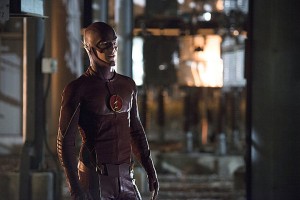 The Flash made Barry Allen The Flash by the end of its first episode.  Suck it, Smallville.

Yet even that is not quite enough to make an Ezra Miller Flash movie feel completely pointless beyond merely being a super-sized version of the TV show.  As Forbes put it:

“The Flash has featured feature-film-quality special effects, breathless action sequences, supervillain showdowns, and not a little of the kind of science fiction-y  material that separates The Flash from the likes of Batman or Wonder Woman. With less than one season down, the show has already shown a willingness to let its freak flag fly, which leaves that much less material for the movie to cover. Yes, the feature film will be much more expensive and will theoretically feature big movie stars alongside lead speedster Ezra Miller. But at the end of the day, the movie will struggle to offer more than just what the television show offers on a bigger scale, as opposed to a wholly different experience.”

That’s actually the part where Lord and Miller’s involvement in the 2018 film might simply make things worse. The tone of the TV show is remarkably upbeat and unabashedly openhearted with a real flair for relationship drama surrounding Barry and his father figures. That’s not quite the same as what Lord and Miller have become known for, but it’s close enough that even if they provide their signature meta comedy and less of a CW approach to the romance we’re still talking the same general ballpark in terms of tone. Seemingly the only way for a Flash movie to differentiate itself would be for a dark and gritty treatment, entirely wrong for the character as well as 100% wrong for Lord and Miller’s talents. You can say that at the very least they could do the Wally West version of The Flash, who is quite a bit different than Barry Allen, but remember that the movie won’t come out for another 3 years. By that point, unless WB won’t let them it’ll be stunning if the TV show hasn’t already added a version of Wally to its cast, assuming the show’s quality and related ratings don’t waver considerably.

Warner Bros. approach to building its cinematic universe for its DC properties differs from Marvel in that they are opting for what fans are calling the DC Cinematic Multiverse in which the films go together, the TV shows are scattered to the wind, Arrow/Flash joining forces but Gotham off on its own and Supergirl’s fate up in the air.  There are arguments to be made for the strengths of that approach over Marvel where all of the films and TV shows connect, often resulting in them having to bend over backwards to accommodate continuity.  So, in theory beyond potential market saturation concerns it shouldn’t be a problem to have young Bruce Wayne on Gotham and an old Bruce Wayne in Batman v Superman.  However, at this point they have kind of screwed up with The Flash.  The show so often looks like a movie and viciously makes its way through every level of Flash comic book lore that by the time the film arrives it’s more than fair to wonder what material will really be left for them, even though their costumes and special effects will obviously look much better.  Lord and Miller’s best plan at this point might be to simply hope that the TV show loses steam and fades away by the time the film arrives.  A free bit of advice to them, though – Whatever you do, don’t name one of your characters Harrison Wells.  We’ll be on to you.

What do you think?  Is it actually a great thing to have such a well-liked TV show because now they won’t have to try so hard to sell people on liking the movie in 2018?  Or will the TV show have the exact opposite effect of creating pushback to the idea of paying to see what you can otherwise get on TV for free?