Everyone at the Telluride Film Festival in Colorado this weekend expected to see the late Sydney Pollack’s long-lost Aretha Franklin documentary Amazing Grace.  For legal reasons, Aretha objected and was granted an injunction to prevent the film’s premiere.  That’s a shame for the film’s producer, who was looking to land a distribution deal with HBO, Showtime or Netflix.  However, now there’s one less high-profile doc competing for attention while various directors and producers attempt to sell their documentaries at Telluride this weekend and/or the Toronto Film Festival next weekend.

While Amazing Grace is held up by the court, Festival-goers can focus on (just to name a few):

Mom and Me – Ken Wardrop’s ode to Oklahoma mothers

Adweek argues that Showtime might be one potential buyer worth talking to.

On July 7th, Showtime’s new standalone streaming platform (their version of HBO Now) went live, and it’s currently available on iOS devices, Roku and PlayStation Vue for $10.99 per month or as a $8.99 premium add-on for current Hulu subscribers.  Showtime President David Nevins plans to add event more partners prior to the new seasons of Homeland and The Affair in October.

To this point, he’s been fascinated by the daily reports he receives about the streaming habits on the platform, with the level of data now available to him far superior to anything he ever received from Nielsen ratings.  There have been a couple of surprises, such as the fact that documentaries have been an incredibly popular viewing option on the service thus far. It’s partially a reflection of the the way Showtime has been bulking up its documentaries in recent years.  Going forward, Nevins claims there are at least “seven meaningful films” on the slate, including American Dream/American Knightmare, about Death Row Records co-founder Suge Knight (Sept. 26). 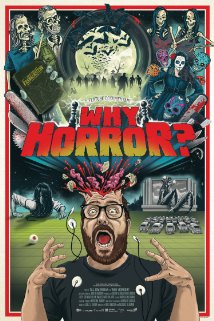 Showtime chairman and CEO Matthew Blank thinks the popularity of the docs on the streaming service comes down to the way users have been freed up to browse through content ala Netflix rather than watching whatever happens to be on the network at any given time.  As a result, users of the Showtime streaming service might be more aware of the network’s roster of documentaries than actual Showtime cable and satellite subscribers.  To that point, I am a cable subscriber, and I didn’t know that Showtime had the documentary Why Horror?, a retrospective on the psychology behind horror movie fandom, until looking at the company’s official website while researching for this article.  Now, I fully intend to watch Why Horror? today or tomorrow, using the Showtime Anytime on-demand service.

“Because you’re forced to menu, in a very slick, promotional way, I think you take away a lot more from what’s on the service and what Showtime is.  You’re not relying on some external promotional vehicle to bring you to that documentary. You now have that great customer interface at your disposal, where you’re going to get to immerse yourself with things like docs, and maybe you’re going to want to watch them more. I think we’re going to see much more of that.”

As a result, Showtime now has that much more motivation to keep re-stocking its steady stream of documentaries.  Not that they really needed even more motivation after watching HBO’s buzzy docs like Citizenfour, Going Clear, Kurt Cobain: Montage of Heck, Sinatra: All or Nothing or Nothing At All ,Tales of the Grim Sleeper and, of course, The Jinx dominate headlines this past year.

So, while documentaries currently tour the festival circuit there should be at least one extra motivated buyer out there.