Watching Daddy’s Home is like having someone repeatedly punch you in the chest while someone else continually pokes your eyes with a needle.

If you want to watch a good Will Ferrell-Mark Wahlberg comedy, please skip Daddy’s Home and rent The Other Guys.

Hey, I just saw Daddy’s Home. It was pretty funny.

Those are the three primary types of reactions I noticed pouring out on my Twitter feed yesterday afternoon, with the industry trades (e.g., Variety, THR), pop culture sites (e.g., AVClub, ScreenRant) and random fellow film fans I follow all weighing in with their opinions, usually offering some variation of, “Don’t see this terrible, terrible movie.” By that point, I already had my ticket though. Daddy’s Home was picked as our family Christmas movie this year, and we bought our tickets in advance. If Daddy’s Home was truly craptacular, well, I was stuck with it. How could it really be that bad, though? As the trailers spoiled, there’s a scene in which a drunken Will Ferrell’s attempt to make a half-quart shot during the halftime of an actual NBA game goes horribly wrong:

[Crickets, no laughing] Um, this might not be the right movie for you.

[Laughing out loud] Okay, we might be in business here.

Ben Whitaker (Ferrell) is the successful, kind and overly sensitive new husband to a slightly younger woman (Linda Cardellini, who was born 8 years after Ferrell) and the stepfather to her adorable two kids, Dylan (Owen Vaccaro) and Megan (Scarlett Estevez). Just as Megan finally stops drawing family photos in which Ben is being humorously murdered and Dylan finally feels comfortable enough to ask him for some fatherly advice, their motorcylce-driving, biological dad Dusty (Wahlberg) rolls back into town, clearly intending to reclaim his family. Of course, that intention is obvious to everyone except for Ben, whose tendency to avoid conflict prevents him from realizing Dusty is merely pretending to be his friend while actually undermining him.  It’s step-dad vs. dad. Beta male vs. alpha male.  May the best dad win.

It’s a familiar comedy of contrasts for Ferrell and Wahlberg, recalling 2010’s The Other Guys where Ferrell was a mild-mannered forensics accountant and Wahlberg was the hot-tempered cop forced to work with him. However, it’s not exactly a carbon copy of what they did before. Wahlberg, in particular, is doing something a little different this time. As the actors told BirthMoviesDeath:

Ferrell: I’m once again kind of straight laced and Mark is kind of the, you’re the…

Will Ferrell: But you’re even crazier this time! Except every time he says something crazy, it turns out to be true, he’s actually done it. So his tall tales are actually feats that he’s accomplished which is even more bewildering to me. But Dusty’s like a mythical character in a way, it’s hard to believe that this guy really exists, and I keep – my wife keeps saying like, ‘I’m warning you, don’t let him into our lives,’ I’m like, ‘It’s going to be fine!’ And sure enough, he’s like a magical creature who wreaks havoc on my life.

Mark Wahlberg: I’m trying to do it in a not so traditional way, either. I’m trying to be as pleasant and likable as possible for the most part until I put him in a horrible predicament.

Mark Wahlberg: We didn’t want it to be like, Oh, this guy’s a dick, we’ll root against him and we’ll root for him. We wanted it to be a little more –

This time around, Will Ferrell is arguably better served with the material than Wahlberg, whose character’s arc does feel rushed through in the end.  Plus, Linda Cardellini has very little to do as the increasingly concerned wife who may or may not secretly want to have another kid.  However, what Daddy’s Home ultimately has going against it is that it’s simply not as clever as The Other Guys. That was a buddy cop comedy which also happened to function as a spoof of buddy cop comedies. Giving us the slightly unexpected was woven into the film’s premise.

By comparison, Daddy’s Home is a far more formulaic family comedy with plot points you can predict before the movie even starts (they’ll be friends, then they won’t, then the wife will get mad at both of them, the kids will be the real victims in all of it, etc.). There is a completely random plot thread involving Hannibal Burress as a handyman who suddenly moves in with the family, which, again, I was kind of okay with because that type of “WTF?” humor is what I look forward to in a Will Ferrell movie.  In this case, it was an extreme extension of the idea that Ben is too nice, and Dusty is using that against him.

And there are a couple of moments designed to spoof the genre conventions of a family film, but they seem less organic and more Anchorman-esque in their randomness (not West-Wide-Story-brawl-among-news-anchor random, of course, but still pretty random). As a fan of both Anchorman movies, I am a sucker for that kind of humor, but to some it might feel like torture watching a prolonged gag involving Ben and his boss (Thomas Haden Church) bonding over their collective disappointment that he didn’t get to chase someone down and deliver a big, melodramatic speech like he planned. 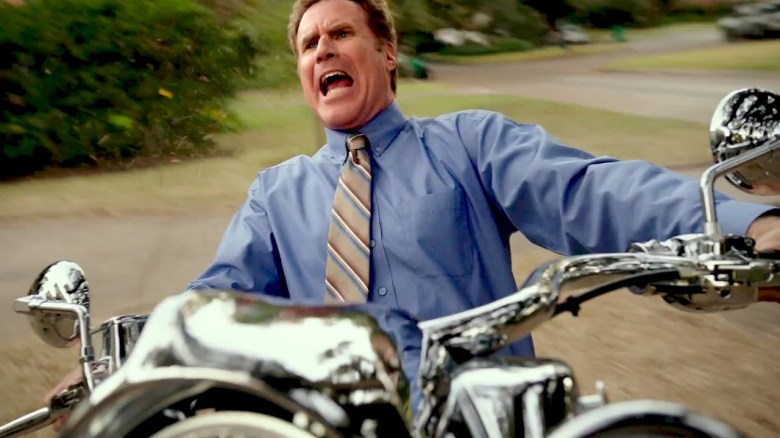 That type of humor is a rarity in Daddy’s Home, though. Instead, this movie’s comedic set pieces usually involve Will Ferrell falling down and going boom, predictably eliciting plenty of laughter from my sold-out Christmas day screening. Afterwards, it was easy to hear kids telling their parents, “My favorite part was either when he got electrocuted, or when he rode that motorcycle into the house. That was funny!” Be forewarned, though, this is rated PG-13 for good reason. There are curse words a-plenty, and a scene at a fertility clinic might prove difficult to explain to young ones.  Daddy’s Home does often feel caught between being a family movie and a vulgar comedy, which makes sense since the director, Sean Anders, has only ever made R-rated comedies (e.g., Horrible Bosses 2, That’s My Boy).  There are certainly some mean-spirited moments, particularly early on with the way Megan and Dylan react to Ben’s propensity to cry when they open up to him.

To be fair, there is more to this movie than just Will Ferrell pratfalls, and “sensitive man” vs. “rock star” cliches.  There is a surprisingly successful effort to comment on the inherent awkwardness of the step-dad/biological-dad familial dynamic, and the film is arguably at its best not when Ben and Dusty are in conflict but instead when they actually use their contrasting parenting styles to rally around Dylan and his on-going bully problem. That particularly plot thread pays off to hilarious results in the film’s climactic sequence at a school dance. In fact, while the step-dad vs. dad comedy which makes up the meat of the film is hit-and-miss the final 30 minutes absolutely sticks the landing, even up to its final moments which, ala Inside Out, rotates throughout the cast to provide glimpses into their inner monologues.

My problem with this movie might simply be that I don’t really have a problem with it. Scrolling through other reviews, it appears as if quite a few critics have been actively offended by Daddy’s Home, arguing that it advances gender stereotypes which should have no place in 2015 culture.  I honestly don’t care that the step-dad of the story is effete and the bio-dad is a modern cowboy. I don’t mind that the less manly man is the constant butt of the jokes.   I wasn’t disappointed that the director/co-writer (Sean Anders) shied away from making a potentially more interesting movie which explored the sadder side of Dusty’s life. I didn’t find the premise to be inherently vulgar. All I wanted from this movie was for it to make me laugh, and it accomplished that mission way more than five times, which is BBC film critic Mark Kermode’s barometer for the basic success of a comedy.