This is an argument I’ve been having with myself over the recent Doctor Strange whitewashing controversy: is Tilda Swinton playing someone who resembles a Tibetan monk in the Doctor Strange trailer basically the same thing as Ben Kingsley playing The Mandarin in Iron Man 3? I ask this because I was totally okay with what they did in Iron Man 3, and now with Doctor Strange I know I’m supposed to be upset but I’m just not feeling the outrage. What am I missing? Let’s look back at the source material:

We’ve all presumably encountered adorably racists grandparents at some point, right? It’s cute, in a “old people say the darndest things” kind of way, but still horribly uncomfortable. Well, that’s what reading really old comic books can be like, particularly as it relates to the depictions of Asian characters. You marvel at the remarkably casual racism on display, and go through a myriad of reactions, from feeling angry to laughing at the campy art to saying aloud to no one in particular, “I can’t believe this used to be okay.”

Here in the age of the superhero movie, we certainly don’t want the inevitable live action adaptations of those old comics to advance the same outdated racial stereotypes. Marvel’s answer in the case of Iron Man 3 and Doctor Strange has been to completely re-conceive the potentially offending characters.

With The Mandarin, what other choice did they have? As Marjorie M. Liu, a real life Asian comic book nerd who’s created a couple of her own things (Dirk & Steele, Hunter Kiss) as well as written various X-Men titles, told io9:

The Mandarin is pretty much a direct descendant of the Fu Manchu yellow peril caricature-at best Orientalist, at worst, racist. The diabolic Asiatic is a hoary Hollywood staple – one of many stereotypes that Asian Americana have long had to endure – whether it’s the Fu Manchu, the Kung Fu master, the Dragon Lady, or the bucktooth nerd.

And he’s one of Iron Man’s iconic villains! As ComicPow argued, “How do you write for a character that has racist overtones and whose entire conception is rooted in the politics of the 1960s? How do you make a popular villain less problematic?”

For years, Marvel grappled with those questions, nearly making him the villain in the first Iron Man. While that option was still on the table, Jon Favreau told CHUD in 2006 (as quoted on Racebending.com):

“There are certain fears and certain strengths [The Mandarin] evokes that are applicable, but of course you have to completely remove any of that short sighted cultural ignorance that leads to any sort of bigotry in the storytelling. That isn’t to say those fears and shortcomings of Iron Man as relating to that character aren’t relevant…He was based in China which was then mysterious because it was Red China. Today China is mysterious in other ways because it’s Global China.”

By the time Iron Man came out in 2008, The Mandarin was merely hinted at via various nods towards his Ten Rings terrorist organization. Jeff Bridges’ Obadiah Stone was the villain instead, with Favreau reasoning that beyond any racial component The Mandarin and his magical rings didn’t make sense for the somewhat more grounded approach they were taking to the property.

Two years later, when Iron Man 2 featured a main villain who was again not The Mandarin the obvious question was whether or not they would ever pay off all those Ten Rings easter eggs. Favreau told MTV (from Racebending), “You have to do The Mandarin. The problem with The Mandarin is, the way it’s depicted in the comic books, you don’t want to see that.”

Of course, Favreau was already on his way out at that point. His eventual replacement, Shane Black, was far more blunt in his assessment of The Mandarin, flatly telling a 2011 Comic-Con convention audience, “The Mandarin is a racist caricature.”

So Black and his co-screenwriter Drew Pearce leaned into the stereotypes and created a satire of The Mandarin, turning him into an American think tank-created amalgamation of our various cultural cliches about terrorists. In their version, the true Mandarin is the rich white guy, Guy Pearce’s Aldrich Killian, who created the think tank as part of a long scheme to settle a score with Tony Stark. Ben Kingsley, a Brit of “partial South Asian descent,” was cast to play the public persona of The Mandarin, mumbling in a highly mockable, vaguely undefined accent, “You’ll never see me coming.” He eventually reveals that his true name is Trevor Slattery, and he’s simply a dimwitted, alcoholic actor who was hired to play the part Killian created.

This was Black and Pearce’s more comedic version of the Batman Begins rope-a-dope approach to villains (eg., Ken Watanabe as fake Ra’s al Ghul/Liam Neeson as real Ra’s al Ghul). However, at sold out Iron Man 3 screenings on opening weekend when this twist was revealed you could hear the blood boiling in the bodies of certain comic book fans next to you in the theater. For others, the official company line (more or less, “this dude was a super racist character back in the 1960s so we created a kind of satire of him in this movie”) seemed agreeable. Plus, if you wanted to dig deep casting Ben Kingsley as the public version of The Mandarin was more accurate than we realized. Jeff Yang, editor of two anthologies of Asian American shared-universe superhero comics, told io9:

Marvel fanboys will remember that the Mandarin is actually biracial: His father is said to be a “direct descendant of Genghis Khan,” and in fact, the Mongol empire spread so widely that many of these descendants are spread across Eastern Europe and the Middle East… as well as India, where the Timurid royal house claimed to be of the lineage of Khan’s son Chagatai. Khanate lineage is particularly prized in many Muslim societies, such as Russia’s Tatars and among the Uzbeks of Central Asia. So it actually makes more literal sense for Kingsley to be cast in the role, with an updated Mongol look, than someone who’s Han Chinese wearing the Mandarin’s traditional Chinese scholar-inspired outfit.

Still, to appease the spurned hardcore fans Marvel later walked back the whole storyline, revealing in the Marvel One-Shot “All Hail the King” that the real Mandarin exists in the MCU and was not at all pleased with Killian and Trevor’s imitation. However, it’s very telling that this supposed “real Mandarin” remained entirely off-screen, Marvel clearly deciding they still want nothing to do with that potential minefield.

Ultimately, Marvel was in a tough position with a troubling character, and they settled on a remarkably bold solution. Isn’t that the same thing they’re doing with the Ancient One, traditionally the Mr. Miyagi to Doctor Strange’s Daniel? They’ve changed his gender (we think – Swinton seems to have inspired them to make the character completely androgynous) as well as ethnicity. 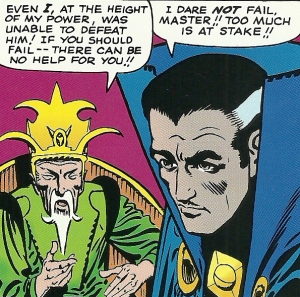 As WhatCulture summarized, “The Ancient One in his original guise was a bit of a stereotype; not offensive, mind, just typical of the American pigeonholing that went on whenever an Eastern man or woman was committed to film or print in the early sixties.”

I think if you look at some of the early incarnations of the Ancient One in the comics, they are what we would consider today to be quite, sort of, stereotypical. They don’t hold up to what would work today. Also, within the storyline of the comics, and our movie, ‘the Ancient One’ is a title that many people have had. We hit very early on on, What if the Ancient One was a woman? What if the title had been passed and the current Ancient One is a woman? Oh, that’s an interesting idea. [Clicks fingers.] Tilda Swinton! Whoah! And it just hit.

The problem with trying to equate Iron Man 3‘s Mandarin scenario with The Ancient One, though, is that it’s not like The Mandarin was a key representative of Asian culture in the plot of the film. As Hitfix argued with The Ancient One, “Doctor Strange will still be traveling to Asia after his accident to gain his powers. But now instead of at least a tentative link to Tibetan culture — or more likely the fictional country Madame Gao of Daredevil hails from — you’ve got a white woman teaching a white man the secret mysteries of an Asian culture.”

Now that is a valid, story-based argument against the casting of Swinton. It’s progressive that they switched the character’s gender (at the very least, they definitely cast a woman to play the part), and it’s logical to have settled on the possibility that The Ancient One is not one person but instead a title passed down through the generations. However, when you consider the scenario (master teaching a new student the mystic arts) and the setting (a vaguely Tibetan temple) slotting Tilda Swinton and Benedict Cumberbatch into that isn’t exactly the best look.

However, Tilda Swinton is so aggressively unique and otherworldly that she naturally brings a captivating presence to the role of the mysterious magic mentor. Whitewashing or not, she will probably make for a fascinating version of The Ancient One, but it’s still worse than what they did to The Mandarin.

Are you feeling the Ancient One outrage? Do you just not care? Or are you still – still! – steaming mad about what they did to The Mandarin? Let me know in the comments.