I refer, of course, to the question of whether or not Laurel Lance had really returned from the dead, as teased at the end of Arrow’s mid-season finale last month. CW’s marketing department gave the answer away within weeks, and even if you somehow missed/ignored those spoilery trailers it turns out the mid-season premiere had precious little patience for keeping up the ruse. The “she’s not our Laurel, she’s the one from Earth-2” canary (or cat) was out of the cage (or bag) by the second commercial break, thus setting up an episode which was largely about Oliver’s moral authority being questioned and challenged by a newly assertive, vengeful Felicity. Oliver can worry about his conscious later and drop the “I failed real Laurel, but maybe I can save fake Laurel” sermonizing; Felicity has a dead boyfriend to avenge and if Earth-2 Laurel can be tricked into leading them straight to Prometheus then everyone needs to get the heck on board with that.

For those expecting the real Laurel Lance to return and take center stage, this episode had to be a disappointment. Moreover, for those expecting the series to at least start the process of transitioning the Earth-2 Laurel into being one of the good guys as well as the rightful heir to the title of Black Canary this episode likely registered as frustrating. It ended with the repeatedly unrepentant Laurel locked away and some woman we’ve never seen before presented to us as the possible new Black Canary, seeing as how she’s putting the Canary tech to good use and Oliver is newly determined to pick Laurel’s successor. The show has all the ingredients it needs to put Laurel Lance-Black Canary back together again, but it’s going a different direction, at least in the short term. 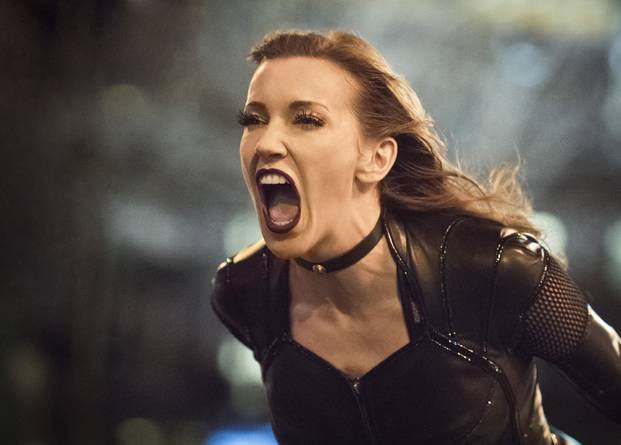 Yet I’m okay with that. Between Gossip Girl, Supernatural and Arrow, Katie Cassidy has consistently shown she’s better at playing villains or characters with a bit more of an edge to them. Long term, Black Siren likely is being set up on some kind of redemptive arc, but for now the writers and Cassidy herself appear to be having just too much fun playing her as a vixen, as supremely evident in all the taunts she kept hurling Felicity’s way in “Who Are You?.” The “this is why I behave the way I do” sob story she told Oliver might be true or at least partially true, but to think that the power of Oliver’s words/love would cure her soul in a single episode is kind of an insult to her as a character. She might become the Faith to Oliver’s Angel, or she might already be earmarked for a return stint to The Flash or mini-arc on Legends. Wherever she ends up, though, I hope they drop that damn ose ring.

Katie Cassidy was but a mere guest star in “Who Are You?”, a villain of the week spurring intra-Team Arrow conflict, specifically between Oliver and Felicity. The producers promised during the break that the weight of the previous four years combined with the loss of her boyfriend was going to push Felicity to some dark places or at least darker than normal for her. We appear to be witnessing the beginning of that, glimpsing a Felicity in “Who Are You?” who was quick to take control when necessary and less willing to patiently indulge Oliver’s predictable stubbornness. 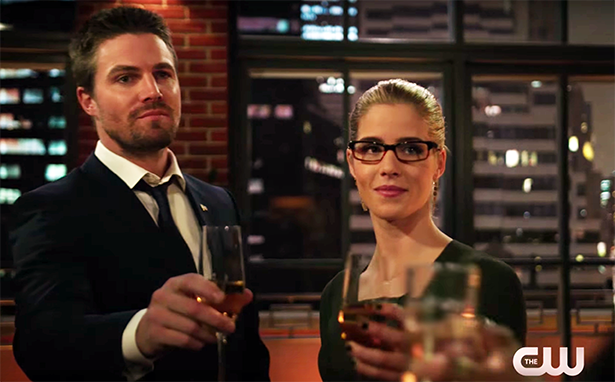 To some, this might ring a tad hollow because we never spent enough time with Felicity’s boyfriend to truly understand him or his relationship with her and thus don’t completely connect with her obvious sense of loss. However, she was a badass in this episode, coldly logical in her planning and quick to toss multiple well-placed stings Oliver’s way. Felicity this season has been clearly re-set to a pre-season 4 version of herself and somewhat de-emphasized in the plotting, the producers way of saying they might have pushed her too far to the front of the show last year. However, “Who Are You?” gave us a version of Felicity who didn’t have to just be adorkable or mother hen to the new recruits nor did she have to be cycling through romantic melodrama with Oliver (as was too often the case last season). Instead, she kind of kicked ass, even if’s all keyed off the death of a character we never truly got to know.

Elsewhere in the episode, Diggle and the DA decided to fight the good fight in court and had to get all lawyery about it, and Curtis expressed what many have already noticed, namely that he simply can’t hang with the bad guys when it comes to fighting. So, he’ll be gadget guy, which probably means the writers will have to work even harder to differentiate Curtis and Felicity’s team roles and skillsets but in the moment it made for some of Echo Kellum’s finest acting on the show to date.