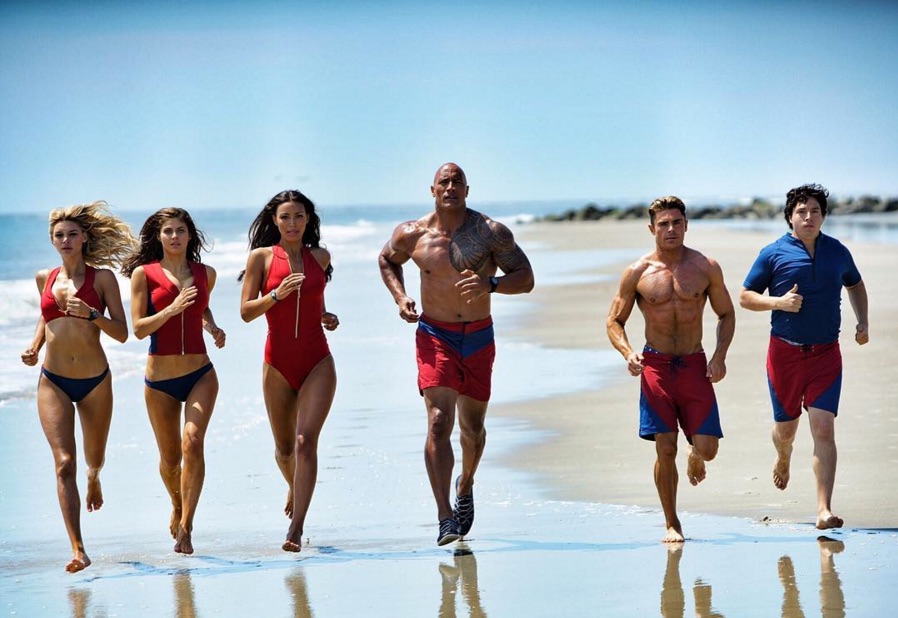 Baywatch is a cheap cash grab made by a bunch of Hollywood hacks transparently trying to ride on someone else’s coattails. It’s the product of idiotic, probably soon-to-be-fired Paramount Pictures executives looking at 21 Jump Street’s eye-popping box office numbers and saying to themselves, “Well, if Sony can revive a hokey 90s TV show into a blockbuster film franchise how hard can it be?” Then they did several lines of coke before barking drug-crazed orders they’ve long since forgotten delivering, leaving them uncertain how exactly they ended up with a Baywatch movie written and directed by the same guys responsible for Night at the Museum, The Smurfs, Zookeeper and Horrible Bosses.

Okay. That’s probably not exactly how it happened since the days of studio executives running lines of coke willy nilly went out of style after the 80s, but I’d almost prefer that scenario because at least then the movie they made might have been enjoyable as pure trash cinema, like anything in the Cannon Films catalog. Instead, Baywatch is a film which fails on almost every conceivable level but does so in the blandest fashion possible:

The satire is boring, overly obvious and half-hearted at best (e.g., slow-motion running is silly, lifeguards shouldn’t be solving crimes, yet here’s some prolonged slow-motion running and lifeguards seriously solving crime). The action scenes are ineptly put together and too cheap-looking to ever be thrilling (e.g., a rescue on a fiery boat assumes no one will recognize obviously CGI fire). The R-Rated comedy is aggressively unfunny (e.g., a dude gets his dick stuck in a chair in the opening scene, and it’s all downhill from there). And the tone is wildly inconsistent  since the film simply cannot decide if we’re meant to take its plot and characters seriously. Aside from a running gag of Dwayne Johnson using alternating boy band names as insulting nicknames for Zac Efron’s character, I didn’t laugh along with this movie nor, crucially, did I even laugh at this movie. It’s just too bland to warrant either critical engagement or resentful mockery. Even similarly crass, bottom-feeding movies like Dirty Grandpa and CHiPs managed more laughs than Baywatch due to standout supporting performances or the occasional clever play on genre conventions.

In fact, Baywatch is so bad it even occasionally forgets filmmaking and screenwriting 101, e.g., showing little concern for continuity with some of its background performers, failing to establish character entrances in two-person conversations that suddenly turn into three-person conversations, losing track of character locations during action scenes, introducing subplots (is Ilfenesh Hadera’s Stephanie in love with Mitch?) and then forgetting about them (I dunno; the movie completely drops it after one short scene). Jason Bateman candidly said of Baywatch director Seth Gordon’s last movie Horrible Bosses 2, “That’s a paycheck for everyone. Everyone’s gettin’ paid, it’s a freebie.” Gordon seems to have treated Baywatch the same way.

He’s lazily cobbled together a Baywatch movie that doesn’t actually want to be a Baywatch movie; it wants to be a buddy cop comedy like 21 Jump Street but written by people who didn’t actually understand any of that movie’s clever, genre convention-taunting jokes. It wants to turn Johnson/Efron into a lovably mismatched pair with a couple of hot female assistants/love interests who come and go as the plot dictates. Plus, for comic relief there’s a schlubby tech guy (Jon Bass as the Rudy of the Baywatch crew) who keeps hitting on one of the hot girls. Kelly Rohrbach’s instantaneous and entirely unexplained reciprocation of his affection calls to mind Harvey Pekar’s anti-Revenge of the Nerds rant in American Splendor.

At its core, that’s the movie Gordon made, but because it is Baywatch and everyone involved had the absolute vaguest sense that they needed to kind of take the piss out of the source material the way 21 Jump Street did there is a lot of empty-headed leering at hot bodies and seriously half-hearted attempts at self-aware humor. The best you can say is Gordon at least delivers the absolute one thing everyone expects from something called Baywatch: eye candy. 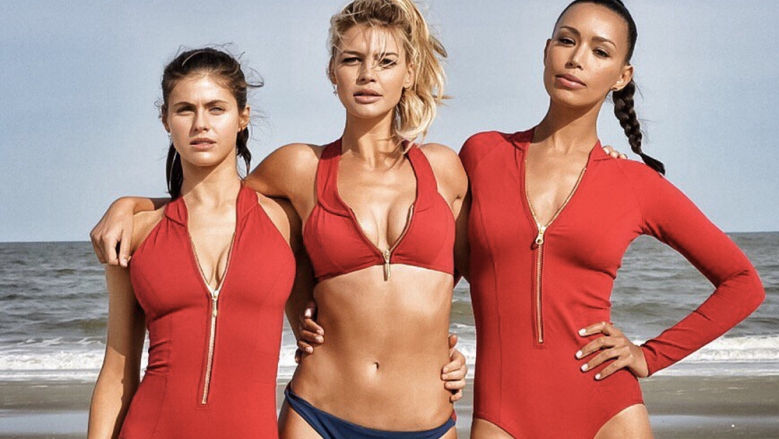 So, when they make a Baywatch movie in 2017 no one’s going in expecting Shakespeare. We’re here for jokes, cheesy action and boobs, and Gordon deserves plenty of credit for arguably objectifying Johnson and Efron more than he objectifies Alexandra Daddario, Rohrbach, Chopra and Hadera. This might as well be called Cleavage: The Movie, but it’s not always female cleavage. Sure, Rohrbach is so scantily clad and forever threatening to fall out of her suit that it would almost been more economical for her to simply walk around naked ala the Shannon Elizabeth parody character in Not Another Teen Movie, but Efron and Johnson are so insanely muscle-bound it led Vulture to joke that they’re “just one scoop of protein powder away from total renal failure.” 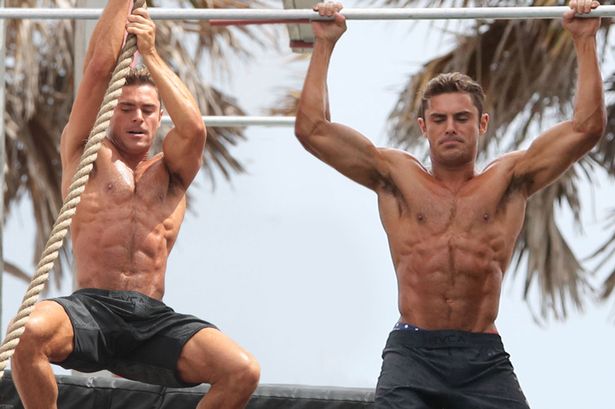 But Paramount and its various financing partners didn’t spend $70m just to get a glorified Sports Illustrated Swimsuit Edition video calendar. There has to be some brain and heart behind the boobs and brawn, right?

Actually, not so much. Gordon and the four credited screenwriters sure think they are pulling off their 21 Jump Street imitation, reviving a stale property in a hip, self-aware way. Because look, Zac Efron just compared the plot to that of a reasonably entertaining, but highly improbable TV show. The local cop keeps telling them to stop investigating crimes since that’s so insanely outside of their job duties. And David Hasselhoff and Pamela Anderson even pop up for pointless cameos. Meta jokes are funny, aren’t they? We’re all so clever. Now, let’s go plan another close-up shot of Rohrbach’s ass.

That’s about the level of brains behind this whole affair. As for the heart, Baywatch oddly leans into this more than it should, adopting an overly sincere tone with its central redemption story involving Efron’s character even though that tone clashes wildly with the more broadly comic setpieces and relatively straightforward action scenes. And the film chooses to take that part of the story seriously while declining to ever really dig deep into what exactly makes Mitch tick. He’s a mountain of a man who commands respect across the beach, insists on running his unit like a police task force and employs selective hearing whenever cops tell him to back off. But what’s his background? Is he failed a cop? A drifter who found purpose in lifeguard tower 1? An athlete-turned lifeguard like Efron’s character? We don’t know. We end the film not knowing a damn thing about him other than “he’s the Rock, and he’s charming.” Yes, but that charm only goes so far.

Baywatch is a hopelessly empty mess that is so cynical in its transparent cash grab motivations that Johnson openly boasts about the inevitable sequel in the gag reel. The old TV show’s theme song used to exclaim, “I’ll be there!” Well, if this movie gets a sequel I sure as hell won’t be there to see it.

I don’t think The Rock’s going to miss me, though: