It no longer qualifies as great insight to say that intellectual property (IP if you’re nasty) has replaced the movie star in the Hollywood ecosystem. The ongoing labor dispute between actors and producers was lost ages ago. Management won, despite those in the old guard who still insist on throwing money at Johnny Depp for vague China-still-loves-him reasons. The only way for a new star to be made these days is for a hot new someone to end up in not one but two massive franchises at the same time (think Chris Pratt in Jurassic World, Guardians and LEGO Movie, Jennifer Lawrence in Hunger Games and X-Men) while also exhibiting the type of personality which kills on social media. Others, you’re all replaceable because every franchise can be rebooted eventually.

I already did my thinkpiece on this in 2015 when Will Smith was out there peddling new age mantras while discussing his various box office failures. After Earth and Focus didn’t have to be judged as financial success or failures in his view because he had “completely released the concept of goal orientation and instead got into path orientation. This moment. This second. These people. This interaction.” 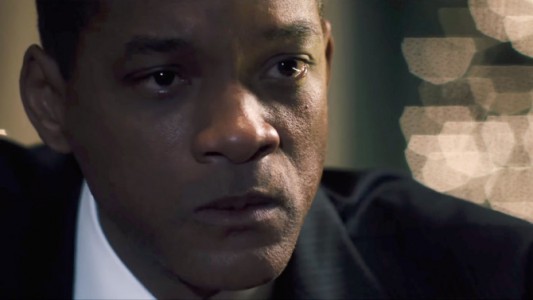 Here before us was a gazillionaire going through the type of spiritual and mental re-set which has been visited upon countless Americans by the Great Recession and its lingering effects. Smith was reaching for a deeper engagement with life and the world after forces outside of his control had rendered moot all of those old goals and ways of measuring success. The whole damn system had changed, and it was time to change with it.

So, Smith hitched his wagon to DC (Suicide Squad), reached for (yet epically failed to achieve) Oscar glory (Concussion, Collateral Damage) and turned into a cheerleader for new modes of distribution. He continues to publicly feud with others in the industry over his embrace of Netflix, the exclusive home of his next big budget movie, Bright. Adam Sandler jumping to Netflix is good riddance to old garbage. Will Smith doing it is a “hold on now” moment where the industry realizes one of its giants is jumping ship before he necessarily had to. Yet of his ongoing attempt to adjust to what audiences want by gravitating toward Netflix, Smith told reporters at Comic-Con last weekend, “I love trying to make that shift and that transition.”

As an established star, he has the luxury of getting to adjust. The new stars coming in have to make their own way in a system designed to de-emphasize them in favor of emphasizing the all-mighty IP. Smith doesn’t know that any of them will ever be able to breakthrough to movie stardom on the level he and those like him enjoyed throughout the 80s and 90s, and that’s partially down to mystery and access.

“It is such a new world. I released my first record in ‘86, so I’m over 30 years in the business. I’m seeing that transition of, essentially, the fans being more and more involved in the creative process. In terms of movie stardom, it’s a huge difference: You almost can’t make new movie stars anymore, right? There was a certain amount of privacy and distance that you had from the audience, and ‘only on July Fourth’ did you have access. That [limited] amount of access gave you a bigger-than-life kind of thing, but this shift into this new world is almost like a friendship with the fans. The relationship is less like the time that you could make Madonna, Michael Jackson, Tom Cruise into these gigantic figures. You can’t create that anymore. The shift is to, ‘We’re best friends.’”

In other words, as soon as social media and the crunch of competition forced movie stars to behave more like flesh-and-blood people and less like idolized gods they lost a great deal of their earning power. For example, you can now love Chris Evans for his Captain America acting as well as his outspoken liberal views on Twitter and aw-shucks charm on podcasts like Anna Faris is Unqualified, but that won’t necessarily make you want to see him in Gifted.

There are various other economic forces and industry trends which have contributed to the decline of the modern movie star, but Smith’s not wrong here – the death of mystery is a contributing factor.

Of course, it’s all in how you measure it. The American movie star used to sell movie tickets on name recognition alone. Now they rack up huge Instagram, Twitter and Facebook followings, and still occasionally succeed in leveraging those followings into film attendance (think Kevin Hart and The Rock’s various social media outreach efforts, Dunkirk‘s Harry Styles bump). But our bullshit meter is higher than it used to be (thanks to RottenTomatoes and social media) and willingness to actually pay for entertainment lower than ever before (as seen in our collective embrace of streaming over film attendance or album/song purchases).

You can still become a celebrity who stars in movies and TV shows and probably makes serious bank from endorsement deals. You just can’t necessarily become a movie star the way we used to think of movie stars, not when brands have overtaken names and desperate-for-attention actors are out there providing unprecedented levels of access to their lives.

That is if you agree with Smith’s argument. Let me know what you think in the comments.