To borrow a joke from Yahoo, Halloween III: Season of the Witch was sold with the ominous tagline: The night no one comes home. Instead, no one showed up.

At least not right away. Or within a year. Or even within a decade. In fact, until recently Season of the Witch remained little more than an odd curiosity, a cautionary tale even, in slasher film history. The lesson: don’t fuck with the formula. Don’t call something Halloween if Michael Myers isn’t it. Want to tell us an Invasion of the Body Snatchers-inspired story about a womanizing doctor taking on some quirky Halloween mask manufacturer who is up to no good in small town America? Fine. Just don’t call it Halloween!

It’s a lesson Witch’s producers (John Carpenter, Debra Hill) and director (Tommy Lee Wallace) learned the hard way. They intended to turn Halloween into an anthology film series which would produce a new scary movie every year or couple of years. However, a lackluster marketing campaign failed to prepare audiences for the radical shift in direction. Even if it had, audiences might have always rejected Season of the Witch. They just weren’t ready to see the formula upended.

They’re ready for it now, though. Season of the Witch has turned into a cult classic, one which Bloody-Disgusting boldly argued is the best film in the franchise.

Not so fast there. The first Halloween can’t be beat. However, to prepare for this article I watched Season of the Witch for the first time, and it’s a surprisingly well-made pod movie with an anti-corporation message presaging Carpenter’s own They Live by 6 years. Dan O’Herlihy’s turn as the creepily ingratiating Conal Cochran strikes just the right balance between delight and meance. And you could put Carpenter and Alan Howarth’s Witch score into any episode of Stranger Things and barely notice the difference. If nothing else, Witch is a lot more entertaining than most of the Halloween sequels that came after it.

Here are 9 things you may not know about Halloween III: Season of the Witch:

1. Nigel Neal had his name taken off the movie

Season of the Witch’s script is credited solely to Tommy Lee Wallace, but that’s wholly misleading. In truth, Nigel Neal, well-known at the time for creating the Quatermass character of countless British films and TV shows, wrote the original script. Debra Hill had been pushing a story idea about witchcraft meeting the computer age, and Neal was hired to flesh that out and put his own unique stamp on it. According to Wallace in the Blu-Ray making-of featurette Stand Alone:

Nigel had some lousy experiences in Hollywood. From his perception, as a general rule Hollywood had mangled his stuff. So, it’s almost like he had a chip on his shoulder. When he turned in his screenplay any criticism that we gave was going to be met with resistance, and we did have some criticism. It was moody, it was dark, it was fascinating. I loved it. I’d say fully half, maybe more 60% of what he did is what that screenplay is.

Carpenter did a re-write, and then so did Wallace. They upped the violence and teased out the lothario aspects of the lead character. Neal was having none of it, though, and ultimately got his name taken off the project even though the majority of the script they shot is still his work.

2. They used largely the same crew as Halloween II

Season of the Witch came out practically a year to the day after Halloween II, and that tight turnaround resulted in Witch maintaining most of II’s crew (pictured above). As Jane Ruhm, costume designer on both films, put it in Stand Alone, “I did get the job on Halloween III because I had done Halloween II. I think it’s almost exactly the same crew. A lot of the same people are on both movies. Because Debra Hill remembered us all. She was very loyal. She just said, ‘Hey, who wants to do another one?’”

3. There was a “no nipple” clause in Stacey Nelkin’s contract. 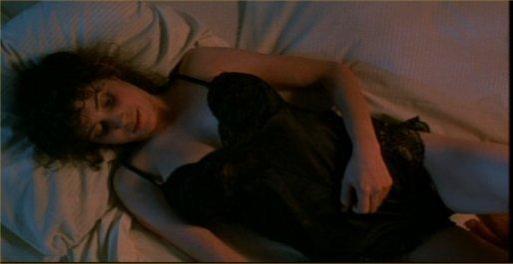 When the We Hate Movies podcast recently roasted Season of the Witch, the hosts took particular exception with the shot of Tom Atkins sucking on Stacey Nelkin‘s nipple during their love scene. To them and others, it’s a sleazy and just plain weird moment in a storyline that makes no sense (for one thing, why does she fall in bed with him so quickly when they’re supposed to be investigating her father’s death?). However, there is a practical explanation here, at least for the nip suck.

As Nelkin explains in Stand Alone, “There was a no nipple clause in my contract. So, they could shoot my breast, but they could not shoot my nipple. Poor Tom Atkins and Tommy Lee Wallace, ‘Have to shoot around this, have to cover up here.’ These things are so technical.”

4. Not even the director knows for sure when Ellie was replaced with an android

Of course, Ellie (Nelkin’s character) might fall in with Dan (Atkin’s character) so quickly because she’s been an android the whole time. We know she is by the end of the film. The part where Dan rips her head off is kind of a dead giveaway. But what if she was always just an android sent by Cochran to find out how much Dan knows and then distract him? Or what if she was real at the beginning but was replaced earlier than we realize?

Maybe. Maybe not. It’s not a question Tommy Lee Wallace can answer. As he’s said on many occasions, “No, I don’t have any idea whether she was a damn robot or not. I really didn’t think it through clearly.”

5. The subplot with the coroner’s assistant was added during reshoots 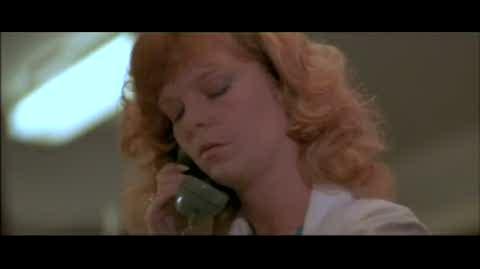 Ellie’s not the only who can’t seem to resist Dan’s charms. It’s very clear he’s had some kind of history with Teddy, the cute lab assistant in the coroner’s office. However, that character was actually added in reshoots.

As Wallace explains on Witch‘s Blu-Ray commentary, upon viewing their working cut of the film they realized some story beats needed to be punched up a little. Most obviously, they’d filmed Tom Atkins repeatedly talking to someone on the phone about the coroner’s report for the assassin who blows himself up without ever establishing who exactly he’s talking to.

So, it was decided to go back and film the opposite side of those conversations, give us a glimpse of who he keeps calling. That then necessitated the creation of a new scene establishing Dan and Teddy’s relationship, with her made into yet another woman who can’t resist his charms. It also gave them an excuse to work in one more grisly death since the Shamrock androids ultimately put a damn drill through Teddy’s head. I feel like there’s a lame joke about Dan the ladykiller to be made here, but let’s not and move on.

According to Alan Howarth, “Debra said, ‘You and John are going to make this theme. Use ‘London Bridges’ so we don’t have to worry about copyright.’” Wallace sang the lyrics himself, and then they sped it up ala the Chipmunks. Wallace also provided the voice of the cheesy radio announcer.

7. The androids were almost all ginger

Michael Myers is kind of in Season of the Witch, and I don’t just mean via that one shot of him in the TV commercial for Halloween. No, the stuntman, Dick Warlock, who played Michael in Halloween II also plays the most notable android assassin in Witch. He’s the one who rips the homeless man’s head off and nearly does the same to Dan.

Other than Warlock, though, most of the androids and creepy guys in suits at Shamrock are unknowns, culled from a casting agency specializing in extras. The call went out from Witch’s production to send them nothing but redheads since Wallace loved the idea of Shamrock only building androids who look Irish. However, there weren’t enough redheads to go around. So, they expanded the criteria to also include blondes and any darker-haired people who could pass for Irish.

8. Tom Atkins and Tommy Lee Wallace’s wives are in the movie

For largely pragmatic purposes two small supporting roles in the film went to family members. Wallace’s wife of the time, Nancy Kies (who also played Annie in Halloween), is in there as Dan’s ex, and Tom Atkin’s wife of the time, Garn Stephens, is poor Marge Gutman. Both couples, coincidentally, have since broken up.

What’s not to like about an ending which not only leaves open the possibility of the villain succeeding in his plot to murder the country’s children but also closes on a shot of the hero shouting and staring directly at the camera ala Invasion of the Body Snatchers?

Everything, apparently. Or at least Universal thought so. As Wallace told Yahoo, “John Carpenter called me after we’d turned the movie in. He said, ‘They hate the ending.’ And to John’s eternal credit, he said, ‘Your ending is your ending. It’s up to me, but I’ll leave it in your hands. You decide.’ And I didn’t think about it for a long time before I said, ‘Let’s leave it as it is.’ And as soon as that decision was made, Universal gave up and decided not to support the movie.”

Next time, I’ll explain why Michael briefly has blonde hair in Halloween 4: The Return of Michael Myers.

If you liked this also check out my prior trivia lists about the Friday the 13th and Nightmare on Elm Street franchises, and you can always circle back around to see my other Halloween trivia articles.

Any corrections or questions? Let me know in the comments