It’s January 15th. Solo: A Star Wars Story comes out a little over four months from now. We haven’t seen a teaser or trailer or even one of those newfangled trailers for the trailer. Beyond that, we haven’t seen an official still from the movie. All we have, really, are rumors, an informal cast photo from the set, and the following official plot synopsis, newly released by LucasFilms:

“Board the Millennium Falcon and journey to a galaxy far, far away in Solo: A Star Wars Story, an all-new adventure with the most beloved scoundrel in the galaxy. Through a series of daring escapades deep within a dark and dangerous criminal underworld, Han Solo meets his mighty future copilot Chewbacca and encounters the notorious gambler Lando Calrissian in a journey that will set the course of one of the Star Wars saga’s most unlikely heroes.”

Ultra-brief recap from a couple of months ago: These two dudes were making Solo. Then they weren’t. Ron Howard stepped in to not only finish the film but also re-shoot a lot of it even though at that point the production was only supposed to have a couple of weeks left.

Good. Now we’re all caught up.

As a result of all behind the scenes shuffling, Solo is now the rare four-quadrant summer blockbuster to have an absolutely non-existent marketing presence less than 6 months before its release. Deadpool 2, by comparison, is due out the week before Solo and it already has two teaser trailers. Oceans 8 comes out the week after Solo, and it’s trailer has been streamed 10 million times on YouTube since last month. 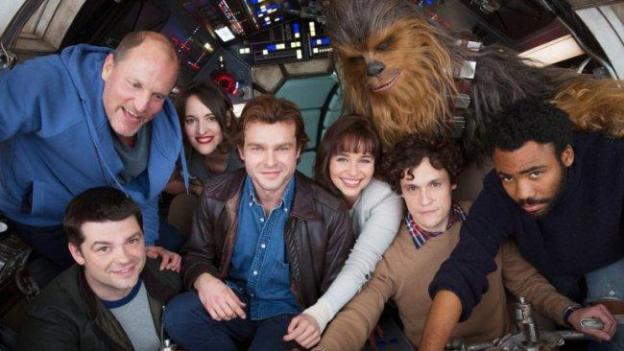 Ideally, Disney would have attached the first Solo trailer to Last Jedi or maybe premiered it during one of the various recent big TV events, such as The Golden Globes, NCAA National Championship Game, or NFL Playoffs. Oh, well. When you fire a film’s directors so close to the planned end of production and then push through massive reshoots marketing campaigns just have to wait.

But how much longer can the wait last? When do we start talking seriously about Disney maybe having to push back the release date, especially now that Fox smelled blood in the water and moved Deadpool 2 to open right before Solo?

First things first, let’s look to see what December looks like right now because after three straights years of Force Awakens/Rogue One/Last Jedi surely the rest of Hollywood has already swooped in to claim December 2019 in the name of Not-Disney: 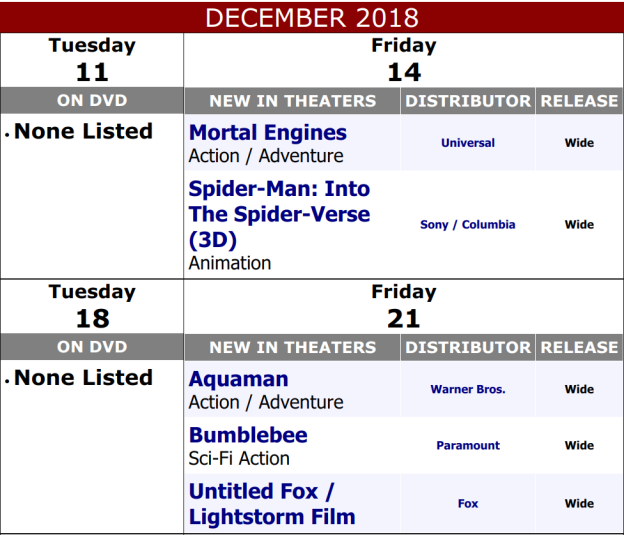 Huh. Mortal Engines is Peter Jackson’s new movie, which makes it notable but not a slam dunk. Into the Spider-Verse’s first trailer was astounding, but Sony still needs to educate the general public about the existence of a new animated Spider-Man movie. Aquaman has James Wan behind it and Jason “My Man!” Mamoa, but after Justice League who the hell knows what to expect from WB’s DC movies anymore. Bumblebee is the oddly stacked Transformers spin-off – Laika’s Travis Knight is directing! Hailee Steinfeld, John Cena, and Pamela Adlon…WTF are they all doing in a Transformers movie together? And Untitled Fox/Lightstorm can suck it until we know more about it.

Takeaway: If Disney moved Solo to one of those weeks I could see a ripple effect of release date changes, some studios scrambling to move out of the way, others standing pat and calling Disney’s bluff since Solo looks like tainted goods right now.

So, you’re telling me it could get pushed back?

Eh. Look a little further down that release date chart: 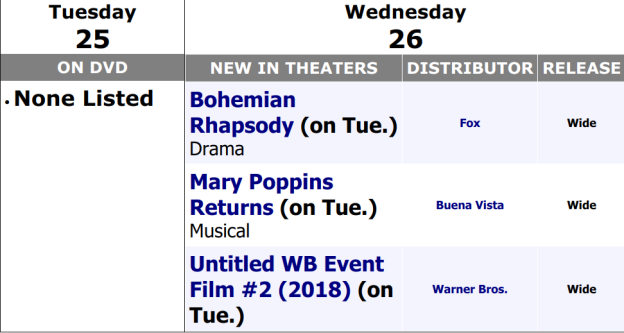 Ah, fish. That Mary Poppins is another Disney movie, huh. Bob Iger’s not going to want to compete with himself.

Plus, aren’t there toy lines, merchandising deals, comic books, and God knows what else that have to be planned months in advance? Surely we’re nearing the point of no return where the cost of delay will negatively impact all of those other revenue streams and quarterly projections. Synergy has no time for troubled productions.

Maybe. But maybe this has actually been Disney’s plan all along. Not so much the “fire the directors” part. No, that was bad. More the “let’s wait for Last Jedi to run its course before mounting a Solo marketing blitz” part. After all, no Star Wars movies have overlapped with each other like this before. This is uncharted territory for the franchise.

Whatever the case may be, ScreenRant’s been reading the signs and doesn’t see any sign of Disney cracking:

It’s entirely possible that the Deadpool shift is going to be followed up by a Solo release date change. But, taking into account everything we know and expect from the film, studio, and distributor, that just doesn’t seem likely. Solo is coming in May, and it will take some serious carbonite to get in its way.

I’m inclined to agree, if only because it feels like if they were going to push Solo back they would have done so by now, especially after Deadpool 2‘s move.

What about you? Let me know in the comments.