Stephen King famously hates Stanley Kubrick’s film version of The Shining. But, how did Kubrick feel about King’s original novel?

“That’s what’s wrong with [Stanley Kubrick’s] The Shining, basically…the movie has no heart; there’s no center to the picture. I wrote the book as a tragedy, and if it was a tragedy, it was because all the people loved each other. Here, it seems there’s no tragedy because there’s nothing to be lost.”

So argued Stephen King in 1989’s Feast or Fear: Conversations with Stephen King. By that point, The Shining was nearly a decade old and already considered a classic. All these years later, it regularly ranks near the top of any “best horror movies of all-time” list. Case in point, Film School Rejects recently put it at #6. Paste Magazine has it at #2, behind The Exorcist.

Such opinions never much mattered to King, though. He has been neither tactful nor restrained in his consistent criticisms of Kubrick’s work. He held such a grudge that in 1997 he leveraged the success of It and The Stand on ABC to finally get a three-part miniseries of The Shining. While undeniably more faithful to the novel, King’s The Shining, which substitutes Stephen Weber and Rebecca De Mornay for Jack Nicholson and Shelley Duvall, isn’t quite a classic. It’s rather pedestrian, really. But for those who always wanted a faithful adaptation, the mini-series serves as a universe-balancing alternative to Kubrick’s far more cerebral masterwork.

King’s other problems with The Shining.

The exact reasons for King’s antipathy toward his cinematic adaptor go beyond film criticism. It’s also personal. The book, after all, was inspired by the author’s own bottoming out period when he was battling alcoholism and struggling to maintain control of his family. It was his third novel and the second to be adapted to the screen, following 1976’s Carrie. For that film, he was paid the lump sum $2,500 for the rights and had no further involvement. With The Shining, however, he’d written a script, which Kubrick rejected without even reading it, preferring instead to co-write his own with Diane Johnson. The pair produced a work which is astonishingly faithful to the text one scene and then entirely unmoored from it the next, often in ways King found to be illogical. Then, to make matters worse, Kubrick would call King at ungodly hours during production to quiz him about the nature of death and whether he believed in God.

King has been dining out on these stories at book signings for years and does not hesitate to add “Jack Nicholson is miscast” and “Shelley Duvall’s helpless housewife character is the creation of a misogynist” to his line of criticisms.

But, what about Kubrick? King has been making noise about his distaste for the film since the moment it came out, but how did Kubrick feel about the novel?

“It is the only thing which was ever sent to me that I found good, or that I liked.”

That’s what Kubrick told Vicente Molina Foix about The Shining in an interviewed conducted in the director’s home in early 1980. The entire interview, which covers a wide range of topics, is included in The Stanley Kubrick Archives, a 2008 collection of documents from Kubrick’s private collection. Not surprisingly, Kubrick liked King’s novel enough to want to adapt it, but not so much he saw any need to be completely faithful.

How Kubrick first learned of The Shining.

The novel, which was published in 1977, was sent to Kubrick by John Calley, the same Warner Bros. executive responsible for the studio’s involvement with The Exorcist. To that point, Kubrick had never written an original screenplay himself. He preferred the art of adaptation because “you can remember what you felt about [the story] the first time you read it” which “serves as a very useful yardstick on making the decisions that you have to make directing the film.”

Why he wanted to adapt it

“Most things I read with the feeling that after about a certain number of pages I’m going to put it down and think that I’m not going to waste my time. The Shining I found very compulsive reading, and I thought the plot, ideas, and structure were much more imaginative than anything I’ve ever read in the genre. It seemed to me one could make a wonderful movie out of it.”

Had he read anything else by Stephen King before?

“No. I had seen Carrie, the film, but I hadn’t ready any of his novels.”

“I would say King’s great ability is in plot construction.”

“He doesn’t seem to take great care in writing. I mean, the writing seems like he writes it once, reads it, maybe writes it again, and sends it off to the publisher. He seems mostly concerned with invention, which I think he’s very about.”

Contrary to legend, Kubrick was not seeking out a horror project, continuing his habit of jumping from genre to genre. Horror wasn’t actually on his mind as the next genre to conquer. The Shining was simply sent to him and he responded to it. As for Diane Johnson, she was a novelist he admired. Once he learned she actually taught a course on the Gothic novel at Berkeley he decided she’d be the perfect collaborator even though she’d never written a script before.

Kubrick sought to make something “less cluttered” than King’s novel 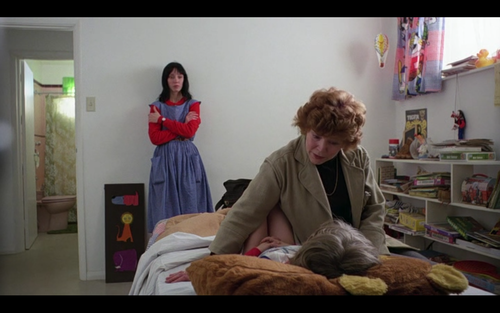 It’s here where the interview gets more into substantive changes from the novel to the film, and Kubrick proves to be resistant to any suggestion that he drastically altered the essence of the story:

“I think in the novel, King tries to put in too much of what I would call pseudo-character and pseudo-psychological clues, but certainly the essence of the character of Jack such as it is, that he puts in the novel, was retained. The only change is we made Wendy perhaps more believable as a mother and a wife. I would say the psychological dynamics of the story, even in the novel, are not really changed. The characters become more clear, less cluttered; that’s it, less cluttered, better than simplified.”

For example, King’s novel devotes a lot of time to charting Jack, Wendy, and Danny’s rocky recovery, with the family doing its best to move past an abusive and alcoholic past and Jack reflecting on his own traumatic upbringing. Kubrick saw no need to spell any of that out for the audience:

“In the film a few clues almost do the same thing; when Wendy tells the doctor about how Jack broke Danny’s arm, you can tell she’s putting a very good face on the way she tells it, but you realize that something horrible must have happened. Or, for instance, when Ullman the manager asks Jack ‘How would your wife and son like it?’ and you see a look in his eyes meaning he thinks ‘what an irrelevant question that is!’ and then he smiles and just says ‘They’ll love it.’ I think there are lots of little subtle points that give you at least subconsciously the same awareness that King works so hard to put in.”

By Kubrick’s way of thinking, King’s work with his character backgrounds was an act of overcompensation. “I think he was a little worried maybe about getting literary credentials for the novel; all the Poe quotes and Red Death things are all right but didn’t seem necessary. He seemed too concerned about making it clear to everybody that this was a worthwhile genre of literature.”

The most major shift, in his mind, was the ending. “The most major shift is really the last 30 minutes of the film, because King’s climax really only consisted of Jack confronting Danny, and Danny saying something like ‘you’re not my father,’ and then Jack turns and goes down to the boiler and the hotel blows up. The most important thing Diane Johnson and I did was to change the ending, to shift the emphasis.”

Stanley Kubrick is long since dead and not even a near-fatal car crash can slow Stephen King down. He’s still clickety-clacking away at novel after novel, and apparently, his feelings about Kubrick’s The Shining haven’t softened with time. In the author’s latest work, The Outsider, his best-reviewed in years, he introduces one character as she’s watching Kubrick’s Paths of Glory because, in her words, it’s “better than The Shining.”

Where do you fall on the Kubrick vs. King debate? Let me know in the comments.