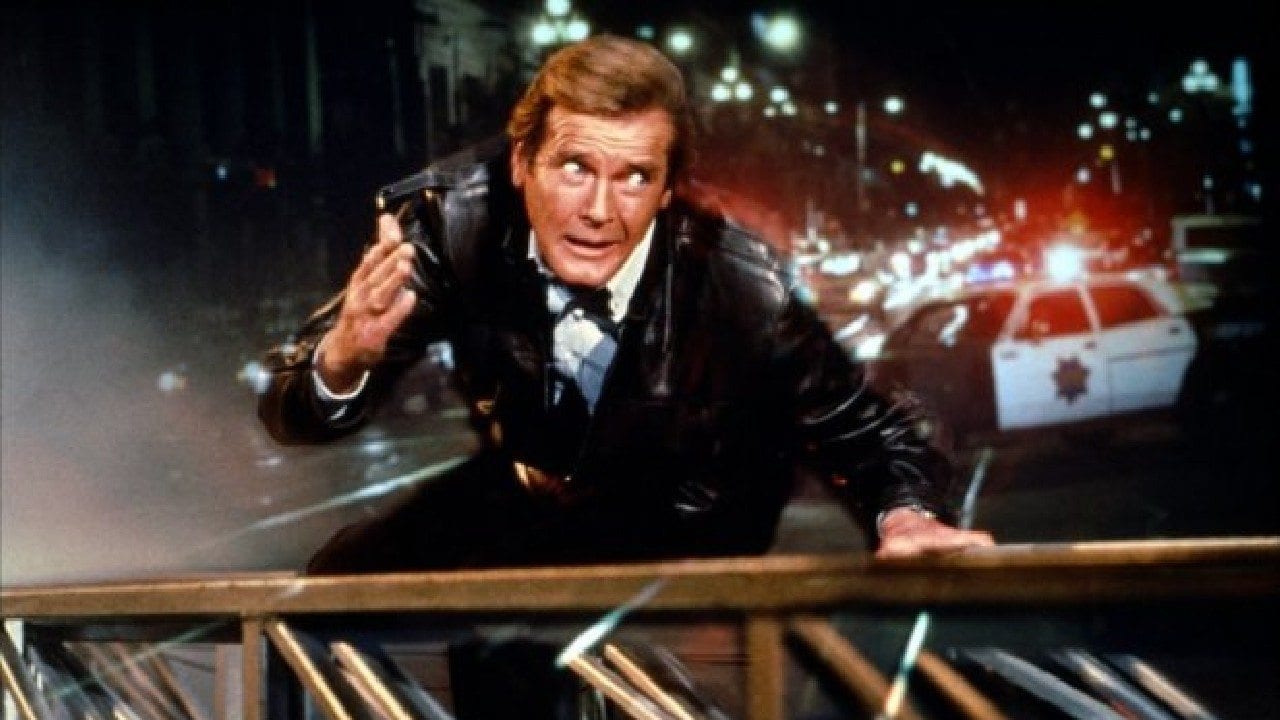 How can any James Bond movie that has Christopher Walken, Grace Jones, a genuine fire in San Francisco’s City Hall building, a climactic fight atop the Golden Gate Bridge, and a freakin’ parachute jump from the top of the Eiffel Tower be considered one of the worst in franchise history?

Play a little hypothetical with me

It’s 1985. You’re a James Bond fan, sitting in a movie theater, happily waiting for the projectionist to get the show rolling. It’s opening night for A View to a Kill, the 14th overall official Bond adventure. This time around, 007 (a 58-year-old Roger Moore) is pitted against an Oscar-winner (Christopher Walken) and model/pop singer (Grace Jones) and paired with a former Charlie’s Angel (Tanya Roberts) for a love interest. These fresh-faced co-stars are approximately 10, 20, and 30 years his junior, respectively, which might be why they’ve also given him a closer-to-his-age sidekick (Patrick Macnee) most known for a TV show (The Avengers) that closed shop 16 years ago.

You may or may not know this, but the on-screen generational upheaval extended behind the scenes as well. Longtime franchise stuntman Bob Simmons was deemed too old to continue and thus downgraded to simply tending to the stables for the horse-racing sequences. Negotiations with Moore went down to the wire, and then once he committed he regularly feuded with Grace Jones, sounding like an old man yelling about the kids on his lawn while complaining about the loud music from her cassette recorder. Her apparent retort? That her 28-year-old boyfriend Dolph Lundgren should be playing Bond, not Moore. (As it is, Lundgren appears in the film very briefly as KGB agent Venz.)

Meanwhile, one of the future stewards of the franchise – Barbara Broccoli – was turning heads on the set as a hyper-competent assistant producer eager to infuse some new blood into her father’s empire. She’ll later admit, “We had a lot of elements in that movie that we thought would attract a youth audience, Grace Jones being one of the main things. Duran Duran was on the crest of a wave.”

Ah, yes, Duran Duran, aka the reason your View to a Kill screening seems to have so many teenage girls in the front rows. The 5-piece New Wave group with every member a heartthrob has already flirted with breaking up, splintering off into two side-projects earlier in the year. Bass player John Taylor – who would much rather be James Bond than the bass player in one of the biggest bands in the world – pitched the concept of writing a Bond song to franchise producer Cubby Broccoli. The rest of the band reunited for not only the rare opportunity to join the Bond franchise but also to work with composer John Barry.

The result was a Bond first: a US #1 hit. The steady MTV play for the music video – which the band filmed on the Eiffel Tower and scripted to end with a literal “killer accordion” joke – sure didn’t hurt.

So, to a good chunk of the people in your auditorium, A View to a Kill is just a way to hear the new Duran Duran song through movie theater speakers. Hopefully, they’ll like what the rest of the film has to offer. I mean, surely they wouldn’t have put all the effort and money into heading to a movie theater just to hear a song. They’ll at least sit through the rest of it, right?

Dancing Into the Literal Fire

This isn’t actually a hypothetical on my part. This was pop culture commentator Glen Oliver’s reality in 1985. “I vividly remember seeing A View to a Kill on its opening night,” he told the authors of Nobody Does It Better. “Half the audience got up and left after the opening title sequence had run. They weren’t there for Bond, they were there for Duran Duran.”

Oliver’s anecdote, of course, is but one isolated incident. However, it does speak to the way people not only treated A View to a Kill in 1985 but continue to do so all the way up to 2020. This, the common argument goes, is a Bond film with a killer song and memorable performances from Walken and Jones, but you’re still perfectly fine with skipping it. Moore later wished he had, writing in his autobiography that A View to a Kill was his least favorite Bond outing since he was too old, couldn’t stand Jones, and never sparked with Roberts.

I…didn’t know any of that before giving the film a chance. I didn’t even know about the Duran Duran song, which is indeed quite catchy. I just knew I had gone far too long in life without seeing what a Christopher Walken Bond villain performance looks like. I almost went a little further, though, because after just 5 minutes of A View to a Kill I wanted to turn it off.

Not a great start

In a classic Willy Borgner-staged snow sequence, Bond evades some Russians through the Siberian mountains, blows up an enemy snowmobile, and slides down the slope on one runner. All fairly impressive stunt work, actually. However, the second Bond’s skiing turns into makeshift snowboarding, the familiar John Barry score gives way to a soundalike version of The Beach Boys’ 1965 classic “California Girls” – the joke being, hey, it looks like Bond is surfing!

Minutes later, Bond escapes via an MI6 boat disguised as an iceberg and instantly seduces the lovely young pilot.

So, straight out of the gate you have a film with oddly infantile humor and a leading man approaching latter era Hugh Hefner, refusing to act his age or ever ponder that his latest conquest is young enough to be his granddaughter.

Technically, it gets better

The plot – as nonsensical as it might be – moves along, leading Bond through a mystery that sees him on horseback, in the back of a sinking car, manning the hose atop a runaway firetruck in San Francisco, trapped in an underwater mine, and then eventually on top of the Golden Gate Bridge.

As the unforgettable henchwoman May Day, Grace Jones’ unique, angular features and “not gonna take your shit” attitude instantly vaults her to the Bond villain Hall of Fame. (Sign of progress, I guess: When she ends up in bed with Bond, she gets to be on top.) Walken, as Zorin, is his usual unpredictable self. By all accounts, he had a grand time making the film – and living in London during the 6-month-shoot – and it comes across in his performance. He behaves the way an especially violent child might while playacting with friends as a James Bond villain.

Zorin has several moments of apparent insane laughter while either killing people or facing his own potential demise. Each time, the laugh was unscripted – Walken couldn’t stop himself from laughing at the absurdity of the situation and the artifice of blockbuster film-making. The result on screen, however, is a uniquely unhinged villain.

Not to be ageist, but…

The problem is Moore. As he himself joked in 2007, he was “only about 400 years too old for the part” when he made A View to a Kill. That’s not an inherently bad thing. After all, there is plenty of drama (Skyfall) and comedy (Never Say Never Again) to be had from a near-retirement Bond. A View to a Kill doesn’t any of that. Instead, it willfully ignores Moore’s obvious age and proceeds with action as normal, asking us to buy the ease with which he seduces every woman he needs to or impossible stunt he performs. When he, at one point, successfully executes the Naked Man routine with May Day, it’s hard not to cringe.

Worse yet, Moore’s signature eyebrow-raise move seems almost absent here, as if he doesn’t even care enough to offer that minimal effort. He floats through the movie, as Cinefantastique argued in its review at the time, “with all the urgency of an untroubled man in search of his opera box.” Tanya Roberts’ Stacey Sutton – an oil heiress unknowingly standing in the way of Zorin’s plans – doesn’t join to give Moore a full-time scene partner until rather late in the process and she ends up under-written and in constant need of saving.

When you have such a disengaged Bond, he can’t help to paper over the film’s deficiencies. So, when Richard Maibaum and Michael Wilson’s script gets away from them and the greedy capitalist Zorin turns out to also have KGB AND Nazi connections there’s not as much of a cushion to excuse the raggedness of the storytelling. Then again, there’s only so much Moore could have done. After all, this is a movie in which “And I thought that creep loved me!” qualifies as motivation.

Plus, as Roger Ebert pointed out Zorin’s plan – partially pilfered from Superman: The Movie – doesn’t make sense. If the goal is to eliminate the competition and corner the computer microchips market, flooding Silicon Valley won’t accomplish that since that’s not where the chips are actually manufactured.

The love of a shitty Bond movie

However, as the James Bonding podcast co-host Matt Gourley once said: “Don’t begrudge anybody their love of a shitty Bond film.” Well, A View to a Kill is a pretty shitty Bond film, but I kind of love it for that very reason. From beginning to end, it’s just so wonky, often enjoyably so. While director John Glen – stepping behind the Bond camera for the third time after For Your Eyes Only and Octopussy – does his actors, particularly Roberts, no favors, he can sure as heck put together an action scene. Plus, as a Bond film in the pre-CGI 80s they somehow got permission to film on the Eiffel Tower and did this:

That scene is a reminder of something I’m noticing a lot during our Bond marathon. The plots in these movies sometimes feel written on the back of a napkin, the acting is hit and miss, and there are often tonal issues. However, you tend to forget all about that and remember the moments or gadgets or songs that stood out. Well, watching a stuntman doubling as Jones parachute out of the actual Eiffel Tower while a stunt driver doubling for Moore dangerously careens down the streets of Paris is pretty damn memorable.

The same goes for a later scene where they set fire to an elevator and lobby inside San Francisco’s actual City Hall building, all with Mayor Dianne Feinstein’s permission. (Beyond that, during filming she officially declared a James Bond Day to celebrate the production.)

The Moore devotees likely demanded better from the actor’s swan song. After all, he played Bond for over a decade and he’s the least memorable part of his final film, unless you include his Keystone Cops routine on the back of a firetruck. His more-bumbling-than-usual Bond is so repeatedly outsmarted by Zorin that the script even hangs a lantern on it at one point. However, like any good Bond he does eventually beat the bad guy and get the girl. Good for him.

But, man, that Eiffel Tower scene is something else.

Sources: Nobody Does it Better, The Ultimate Guide to Bond, Some Kind of Hero, Cinefantastique