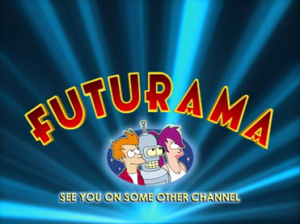 Bad news, everyone!  According to EW, Comedy Central has pulled the plug on Futurama, making them the second network to now tell Bender to go bite his own shiny, metal ass.  Fox was the first to do so when they originally canceled the show in 2003 after 4 seasons and 72 episodes.  Similar to Fox, Comedy Central is citing declining ratings has the chief factor in their decision.

Perhaps best known as that other animated show from the creator of The Simpsons, Futurama is about an interplanetary delivery service in the 31st century, with the ship captain, delivery boy, foul-mouthed robotic bending unit the central characters of a large ensemble.  After being canceled by Fox, the show turned into a valuable property due to strong DVD sales for individual season box sets and high viewership totals for re-runs on Adult Swim.  In 2005, Comedy Central outbid Adult Swim and acquired the rights to re-runs of the show (poor Adult Swim).  The network eventually commissioned four direct-to-DVD movies which would be chopped into four half-hour episodes a piece thus comprising a 16-episode season (the show’s fifth) to air on Comedy Central in 2008/2009.

After the quasi-new season performed well, the network ordered two full 26-episode seasons (the show’s sixth and seventh seasons), which have aired in 13-episodes blocks every summer since 2010.  The last block of episodes, with a scheduled start date of June 19, will be the last new ones to air on Comedy Central.  Hope is not necessarily lost for the show to find another home or revert to its direct-to-video model.  However, according to EW there are no “serious talks at this point” in that area.  To paraphrase Dolph Lundgren from Rocky IV, “If the show dies, it dies.”  Or something.

Below is a trailer for the 13 new and now likely last episodes of Futurama:

Since returning, Futurama has arguably become a more consistent show than it was during its original run on Fox.  However, this steadiness means in addition to never reaching its old lows the show also rarely if ever achieves its previous highs.  Perhaps now is a good time for the show to reach its conclusion, but I am still saddened by this news.

We have 13 new episodes ahead of us.  So, let’s all enjoy the writing and producing of David X. Cohen and Matt Groening and  immense vocal talents of Billy West (Fry, The Professor, Dr. Zoidberg), Katey Segal (Leela), John DiMaggio (Bender), Lauren Tom (Amy), Phil Lamarr (Hermes), and Maurice LaMarche (so many characters that I’ve lost count).  It’s highly likely these episodes will be our last chance to do so.

Are you bummed by this news?  Haven’t liked the show all that much since it came back?  Think it is now better than it ever has been before?  Say so in the comments.