Be it a daytime soap opera, live-action drama/sitcom, or even an animated comedy, TV shows have seemingly given us every potential hilarious mishap, long-forgotten love interest yelling “I object!”, and last-second doubts possible from the wedding storyline. Sometimes the involved characters do end up going through with the marriage whereas other times they do not, breaking each other’s and viewers’ hearts in the process (looking at you Xander/Anya in season 6 of Buffy the Vampire Slayer). However, in the majority of these instances, the couple to be betrothed is a man and a woman.

What of same-sex pairings?  Obviously, the notion of a same-sex marriage is a controversial subject, so controversial in the United States that it’s gone all the way up to the Supreme Court to set a Federal precedent. Plus, the prevalence of LGBT characters on television has often been so minuscule that there simply hasn’t been enough LGBT characters around to be worked into marriage storylines on shows.  However, there have been some rather notable same-sex weddings depicted on television over the years.

Here they are, in chronological order:

Have you ever seen Golden Girls before?  It was basically geriatric Sex and the City two decades before Carrie Bradshaw ever voiced an awkward end-of-episode summation in front of her laptop. It was a joke-delivery machine, one of the finest examples of a now-somewhat passé classical method of sitcom storytelling. It also took full advantage of the willingness of the audience to confront uncomfortable truths about aging, morality, and sexuality if delivered by funny older ladies like Betty White, Estelle Geddy, Bea Arthur, and Rue McClanahan.

So, in the show’s sixth and penultimate season Rue McClanahan’s character Blanche was forced to confront her prejudices when her gay brother Clayton visits to announce his commitment ceremony to his partner.  Blanche accepts and loves her brother for what he is but seriously struggle to cope with his wanting to take the next step toward marriage.  This episode does not technically qualify for this list as it does not actually depict the ceremony, but I am including it anyway because it is such an important episode in the history of LGBT depiction in TV shows.  You can actually watch the entire episode at YouTube.

In the same year that Golden Girls talked about the topic of same-sex marriage, Roc actually showed it and added a race element on top of it, all in only the show’s 8th ever episode.  In the show featuring a cast of predominantly African-American actors, Charles S. Dutton’s titular character Roc lived in a cramped Baltimore home with his wife, father, and younger brother.  In “Can’t Help Loving That Man,” Roc’s uncle Russell reveals that not only is he gay but he is planning on marrying his Caucasian lover.  In classic sitcom fashion, the wedding is held at Roc’s house, i.e., the show’s primary set.

This the true story of an openly gay, HIV-positive Cuban immigrant whose mission in life is to educate the world about safe sex practices and acceptance of alternate lifestyles.  He was picked to live in a house with 7 strangers, have his life taped, and find out what happens when the world gains a new gay icon.

His name was Pedro Zamora, and the show was the third season (the one in San Francisco) of MTV’s long-running reality series The Real World.  At that point, the world was less than a year into the United States military’s new “Don’t ask, don’t tell” policy, and here was MTV showing a young man who refused to apologize for what he was.  In the penultimate episode of the season, Pedro exchanged rings in a commitment/marriage ceremony with his African-American boyfriend Sean. The full episode is available to stream at MTV.com.

Zamora died from AIDs-related complications 8 days after the episode featuring the commitment ceremony had aired and a mere one day after the season finale had aired.

Northern Exposure, aka “Woody Allen-Impression New York Doctor Lives in Quirky Alaska Town and Hates It and Everyone There,” started a trend of shows doing same-sex marriage storylines with recurring characters as opposed to members of the main cast.  In the show’s fifth season, recurring characters Eric and Ron, who had been seen as the co-runners of a local bed-and-breakfast, married in a ceremony presided over by John Corbett’s spiritual DJ character Chris.

Probably the most stereotypical wedding on television is the one where everything is a disaster.  Cheers, Frasier, and Wings all did episodes like that to perfection.  What about an episode where everything is a disaster but the couple just happens to be two dudes?  That was Roseanne’s “December Bride” in which Roseanne steps in to help plan the wedding ceremony for her boss Leon to his partner Fred, both of whom were long-time recurring characters at that point.  As seen in the above picture, Roseanne’s vision for how the wedding should look is chock-full of gay stereotypes, and not at all what the actual couple wants.

Friends did a lot of wedding episodes.  Heck, by the end even they probably lost count of how many times Ross had been married.  This wedding-bonanza is probably not surprising when you remember that in its very first episode Friends featured a runaway bride (Jennifer Aniston’s Rachel).  However, the earliest depicted wedding was in the show’s second season when Ross’ ex-wife Carol and her partner Susan were married. In the episode, Ross is not entirely cool with his ex-wife marrying the woman she left him for, but the spirit of tolerance is upheld in the end when he gallantly steps in to escort Carol down the aisle after her father refuses due to prejudice. Oddly, Carol and Susan’s traditional end-of-ceremony kiss is not depicted.

All it took was the passage of time and looser restrictions due to airing on cable to actually end a lesbian wedding with a kiss, as Queer As Folk did in season 2 episode “The Wedding.” Moreover, unlike the Friends example here the characters who were married (Lindsay and Melanie) were full-time members of the show’s primary cast as opposed to recurring.

During the Jimmy Fallon era of the show, Saturday Night Live had a recurring sketch centered around Sully (Fallon) and Denise (Rachel Dratch), a pair of Bostonians acting the way sketch comedy versions of Bostonians would (which is to say drunkenly).  Playing upon his actual Boston roots, whenever Ben Affleck would host the show he would appear in this sketch with Fallon and Dratch as their friend Donnie.  By the time March of 2004 came around, Massachusetts had just recently legalized same-sex marriages.  So, to the delight of most viewing at home SNL opened with a sketch involving Sully and Denise at Donnie’s wedding only to find out that it was a gay wedding and Donnie was marrying a male lover played by Seth Meyers.  You can watch it at Hulu.com.

Why should the lesbians get all the fun?  Two seasons later, Queer as Folk married off the characters of Michael and Ben.  In the storyline, one of the characters openly wonders if the marriage actually means anything since they did it in Canada where it is legal but it wouldn’t be recognized in his hometown of Pittsburgh in the US.

Ah, yes, it was 2005, and The Simpsons offered their much-publicized take on the hot-button political issue of same-sex marriage.  In the episode, Patty comes out as gay and intends to marry, but the ceremony is canceled at the last moment as her bride-to-be is revealed as a man in disguise.  Marge’s journey in the episode of feeling prejudiced against Patty only to eventually come to acceptance in the end is rather similar to Blanche’s journey in the listed Golden Girls episode. 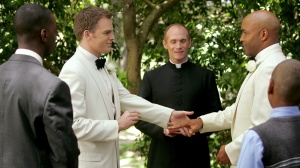 They waited until the absolute end of the show, but in the series finale of Six Feet Under there is a flash-forward at the end to all of the significant events in the lives of the characters.  During this sequence, long-time partners David and Keith are shown in a legal marriage ceremony.  So, before Michael C. Hall became Dexter Morgan and found his way to Julie Benz’ Rita on Dexter he was betrothed to man named Keith.

It seems only fitting that South Park would do their gay marriage episode in the same year as The Simpsons, considering South Park creators’ Matt Stone and Trey Parker’s public lamentations of having to scrap storyline ideas after being informed “Simpsons did it.  In their take on the topic, Mr. Garrison is infuriated when ex-lover Mr. Slave is going to marry Big Gay Al the day after Colorado legalizes same-sex marriage. He attempts to use a class project to prove how unfit same-sex couples are as potential parents, leading to your standard South Park scenario where the adults are all yelling about the hot-button issue while the kids progress through the plot clueless as to what all the yelling is about.

This might be the first “left at the altar” wedding on this list.  In the episode, the characters of Shane and Carmen are supposed to marry, but after Shane catches sight of her father cheating on his spouse her faith in her ability to remain faithful is upended.  When Shane confronts her Eric Roberts-like father (well, actually, he was played by Eric Roberts), he confirms his a-hole status by merely explaining, “It’s just who I am.”  Shane decides that sounds about right, and sends a friend to deliver the same exact message to Carmen (whose soul is crushed) at the altar as an explanation for why there will be no wedding this day or any other day between the two of them.  D-R-A-M-A, drama! 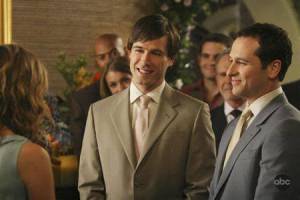 Not much to report here, just the first gay wedding season finale and first gay central character from a primetime (as opposed to cable) show to get married.  Not even worth talking about, right?  Actually, this was kind of a big deal (and, no, I am not trying to reference Ron Burgundy and Anchorman with the use of “kind of a big deal”).  In this episode, Kevin Walker marries his boyfriend Scotty, and in subsequent seasons the two would attempt to adopt a child together. 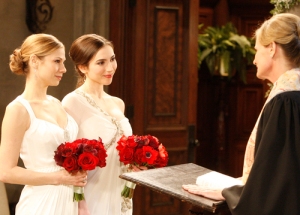 Again, not much to tell here.  Just the first same-sex legal wedding ever televised on American daytime TV.  That doesn’t seem particularly momentous, does it?  Okay, it does.  The wedding was for the lesbian couple Bianca Montgomery and Reese Williams.

Regular characters Callie and Arizona married here, making this the first example of regular lesbian characters in a primetime television show advancing in their relationship to the stage of marriage.

Team Coco was in for a surprise November of 2011 when Conan used his show’s heavily publicized week of live shows in New York City to officiate the wedding of his costume designer Scott Cronick to his partner David Gorshein.

For a similar list, check out ScreenJunkies’ “A Timeline of Television’s Same-Sex Weddings.”

I certainly could have missed a couple of episodes here and there (especially if considering British and Canadian television, which hold far more blind spots for me than American television).  However, in the end, it ultimately turns out that although weddings are among TV writers’ most-often-used devices they are rather rarely used in relation to same-sex couples.

Is any of the above a particularly favorite episode of yours?  Are you more familiar with The L Word than I, and, if so, can you tell me if Shane stayed a perpetual f-up?  Is there a wedding episode, regardless of straight or same-sex, that is among your all-time favorites?  Let us know in the comments section.