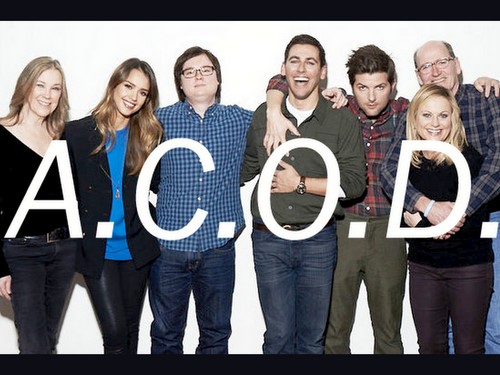 Until now, A.C.O.D. was that strange film in which Amy Poehler played Adam Scott’s step-mother, a scenario made all the more bizarre considering the two play a married couple in their day job on Parks & Recreation.  The comedy premiered earlier this year at the Sundance Film Festival, but was somewhat overshadowed by other comedies like The Way, Way Back at the festival.  Well, those of us who know not the unique joy of the Sundance Festival experience finally have a chance to see footage from the film in the form of its first trailer.  It turns out this could be pretty dang good, although as a huge Adam Scott fan I am admittedly biased.

Emotionally stunted adults struggling to cope in a world their equally stunted parents failed to properly prepare them for could be the plot description of many an indie film these days, such as this year’s Kristin Wiig dramedy Girl Most Likely.  Heck, even last year’s mainstream comedy, Friends With Benefits, sort of fit that description, right down to having Richard Jenkins around as the hilariously strange father of Justin Timberlake’s character.  As such, on paper A.C.O.D. does not immediately appear particularly unique.   Boo-hoo-hoo, your parents are divorced.  If you turn this into a mumblecore exploration of ennui I’m out of here.

However, A.C.O.D.’s focus upon adult children of divorce is an exploration of something far more relatable than you might realize, with some estimates indicating over 50% of children in North America will experience parental divorce in their lifetime and likely suffer through further parental divorces when/if their parents remarry.  Its treatment of the material appears to be to use both a wedding and a long secret book as the macguffins, and cast a leading man with a preternatural talent for dry wit and surround him with outsized personalities giving him much with which to express his annoyance.  Beyond Scott, who appears always on the verge of a mainstream breakthrough, the cast features Catherine O’Hara as the mother, Richard Jenkins as the father, Jane Lynch as the kooky child therapist…and Jessica Alba as the love interest.  Hmmm.  One of these is not like the other.  Earlier reviews from Sundance indicate Alba is predictably the weakest aspect of the film, though not due to performance but due to being the least essential element of the plot.

Over at Film School Rejects, they concluded their review of A.C.O.D. with the following:

Thanks to a sharp script by Stuart Zicherman and Ben Karlin populated by full realized characters, A.C.O.D. clicks along at a steady pace. Zicherman, who also directed the film, has brought together a strong comedic cast, but he also utilizes them well to create a funny film that even those of us who are not A.C.O.D.s (see: me) can relate to.

A.C.O.D. is currently scheduled for a limited theatrical release on October 4, 2013.