Thor’s going to be a woman now. But it’s not really Thor. It’s a mysterious woman who comes along and picks up his hammer after he proves himself unworthy of it. But she’ll call herself Thor.  But the Thor we already know will still be around, just without that hammer. He’ll also be called Thor, technically “Unworthy Thor.” (Maybe they’ll call him “U.T.” for short).

You’ve got to love comic books because if you don’t everything I just said must sound like utter and complete nonsense.  The gist is this: Thor is both the name of the God of Thunder as well as (sort of) a title bestowed upon whoever shall be found worthy to wield the mighty power of Mjolnir, aka, that dang hammer. For reasons which will be revealed in the coming months, Thor will become unworthy of Mjolnir, and an unidentified woman will emerge to take the hammer and with it the title and powers of “Thor.” This will lead to the October launch of a new comic book simply titled Thor, centered around the mysterious new woman.

So, this isn’t really a case of the Thor we already knew truly becoming a woman, but instead something more akin to all those times someone other than Steve Rogers sported the red, white & blue costume and round shield and called themselves Captain America (that’s actually about to happen again).  This isn’t actual gender swapping, although that has happened a lot in comic books.  There are so many freakin’ alternate universes floating around the DC and Marvel comics universes as well as “just for the heck of it” non-canonical, one-off side stories that it’s not particularly difficult for the writers to imagine a world in which Batman has boobs or Iron Man is actually Iron Woman.

The comic tells of an out-of-shape man named Nelson Jent discovering that dialing H-E-R-O at a mysterious phone booth will transform him into unique, though short lived, superheroes. Each time creates a new persona with a new set of powers, eventually returning him to his normal self.

It was part of the second wave of the New 52 (there were waves?) and is a mostly humorous updating of a 1960s series.

This premise leaves it wide open for whoever dials H-E-R-O to be morphed into a female superhero, and that has happened on occasion, most recently during the New 52 iteration in which Nelson Jent can actually swap genders more than just one time (his predecessors could only do it once).  However, every time Jent morphs into a woman she is always called Baroness Resin.

Immortal characters just get so boring after a while, or at least that’s what Andy Lanning, Dan Abnett, and Jackson Guice thought when they created the Resurrection Man (real name Mitchell “Mitch” Shelley) at DC in the late ’90s.  It was an idea originally hatched for a Marvel character, but it ended up with DC: What if there is an immortal who gains a new superpower everytime he resurrects; moreover, what if this new power was somehow related to the manner in which he had died, like some kind of adaptive characteristic to prevent him from dying the same way twice?

The series was canceled after its first 27 issues, but much like its title character, it was resurrected with the New 52 in 2011, lasting a mere 13 issues this time.  During this New 52 run, they finally depicted the obvious: what if after one of his deaths he actually came back as a woman?

Upon resurrecting in a cell somewhere, poor Mitchell discovers he’s now a “Mitchelle” and must escape from a villain who is constantly torturing him after each resurrection just to test a theory; that women possess a higher threshold for pain than men. Therefore if Shelly keeps resurrecting from the torture, he will eventually return as a woman in order to finally adapt and withstand the pain.  Of course, it works and Resurrection Woman is able to pass through the Pain Wall and consequentially return the favour.

There have been at least 6 different Green Lanterns over the years, and that’s not even counting all the other members of the Green Lantern Corps. who simply protect other areas of the galaxy beyond Earth.  No, we’re talking about Alan Scott, Hal Jordan, Guy Gardner, John Stewart, Kyle Rayner, and Simon Baz.

However, as a non-Green Lantern reader the only ones I ever hear about are Hal Jordan (since that was the version Ryan Reynolds played in the live action film), John Stewart (because he was the version used in Justice League/JLU and because it sounds so close to The Daily Show), and Guy Gardner (mostly because a lot of people think he’s a bit of a d-bag).

It turns out Gardner is the one who was once turned into a woman:

The villain known as Dementor transformed our hero Guy into a Gal, which was especially unsettling given that Guy made for one voluptuous and frankly alluring red head. Fortunately, with the help of Martika, Guy ultimately defeated Dementor and restored his gender. 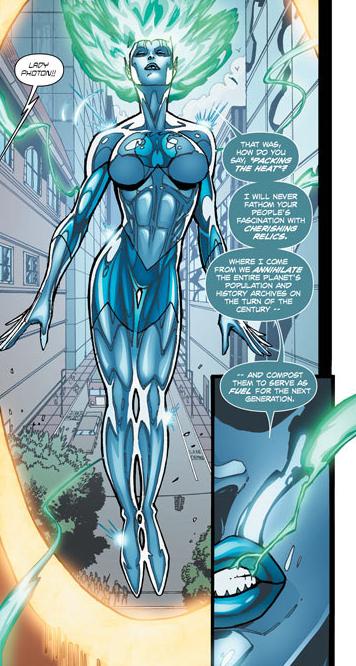 Wait, who’s this now? Photon? Never heard of him. Or her. Or whatever.

That’s probably because Photon is neither a DC nor a Marvel character.  Instead, the silver-skinned, blue-haired alien comes from the superhero team Youngblood, which debuted in Image Comics in 1992.  A team sanctioned by the United States government, Youngblood’s roster has fluctuated over the years, and the title has been rebooted multiple times.  Photon’s sex change came during the 2012 reboot when it was revealed that “Photon’s race not only can change their sex naturally, but that to do so was a routine phase that occurred every seven years.”

Ever since the Chris Hemsworth’s Thor proudly smashed a diner’s coffee cup as a sign that he simply wanted a refill I have kind of loved his character and the whole fish-out-of-water angle.  So, shortly before the release of Thor: The Dark World I decided to jump into the actual Thor comics for the first time, choosing to start with the re-launched Thor from 2009.  There was a definite period of adjustment because things were so confusing.  Thor was the sole surviving Asgardian after everyone else had died in some event known as Ragnarok (basically the Asgardian apocalypse).  For some reason Asgard was stationed directly over Broxton, Oklahoma now.  Odin was nowhere to be found leaving Thor with his powers and thus so all-powerful he started selectively bringing his fallen friends back to life, struggling to find all of their consciousnesses as they had somehow become embedded in the backs of the minds of, particularly worthy humans.  Still, Thor was able to reunite most of the minds and bodies before he turned around and saw this:

If you’ve read the comics before you probably instantly realize that’s Loki inside of Sif’s body.  Yeah, I didn’t know that.  I just thought the comics drew Loki with far more of a feminine flair than I would have guessed.  Then came the cleavage:

Sif has barely featured in either of the Thor films, but she was actually most recently Thor’s wife in the comics at the time this story was published.  Eventually, it was revealed that Loki, ever the scheming bad-ass, had trapped Sif’s consciousness in the body of a dying elderly woman, letting Thor believe that although Sif’s body could be recovered her spirit had somehow forever been lost after Ragnarok.  While in Sif’s body, Loki conspired with Doctor Doom and manipulated Balder into challenging Thor for rule of Asgard.

Thor uncovered Loki’s treachery, far later than he should have mostly because what kind of story would it be if Thor caught on right away?  Plus, Loki really milked the whole “For as long as my words come out of the mouth of his former lover Thor will be very trusting” angle.  With an assist from a bitter Jane Foster, Sif was rescued before the body she was trapped in expired, and returned into her own body and thus into Thor’s welcoming arms.  Loki’s consciousness ended up back in his own body, which he claimed had been lost (he lied…that’s kind of his thing).

Wait a tic.  Loki’s not a superhero.  He’s clearly a supervillain.  He probably shouldn’t be on this list.

Yeah, um, shut up about that?  It warranted inclusion because the inspiration for this list is a quasi-gender-switch set to go off in Thor’s universe, and as recently as 2009 Loki was walking around in a woman’s body.  Why shouldn’t his brother get in on the fun this time around?