In 2009, the Science Channel premiered the documentary Trek Nation from Eugene Roddenberry, the son of Star Trek creator Gene Roddenberry.  The two big bullet point takeaways from the film at the time of its premiere seemed to be how funny it was that Gene Roddenberry’s own son grew up disliking Star Trek, and how hero-crushing it was to discover that Roddenberry might have been a bit of an adulterous man-whore.  For anyone who didn’t get a chance to see it, though, it recently went up for Instant Streaming on Netflix.  It is the type of documentary where you’ll occasionally have to watch Eugene watching Star Trek while a voice-over from Eugene informs us how he only now realizes the greatness that is Star Trek.  However, there are some interesting tidbits revealed across Trek Nation‘s nearly 90 minute running length.

1. Gene Roddenberry Had an Interesting Life…Even Before Star Trek

Trek Nation doesn’t spend much if any time explaining where Gene Roddenberry got the idea for Star Trek or how long he’d been working in the television industry prior to that.  However, it does offer some interesting background biography for Roddenberry’s life prior to his work as a writer.  In 1941, he joined the Air Force to serve in World War II, and flew in 89 missions before the end of the war.  After that, he worked as a pilot for Pan American Airways, suffering a horrific crash in the Syrian desert in 1947, of which he was only 1 of 11 total survivors.  In 1949, he moved to Los Angeles where he worked as a police offer for 7 years, though his true passion was writing which he pursued on a freelance basis by submitting spec scripts to various police shows.  He most notably got a script accepted by the show Have Gun, Will Travel, and quit the police force to pursue writing and producing for television full time.

For all of its high-minded philosophizing, it is sometimes surprising to see just how much female skin was on dispaly in Star Trek: The Original Series.  One could assume it was just a by-product of being a show of its era, i.e., the sexual revolution.  However, maybe it also had a bit to do with Rodenberry’s clear love for the female form because it turns out that he was quite the womanizer.  He married Eileen-Anita Rexroat in 1942, but by the time Star Trek came around in the mid 1960s he had begun an affair with actress Majel Barrett.  In fact, he cast her in a prominent role in the original pilot, though backed down when the network demanded that such a prominent role not be given to a woman (or at least not to his girlfriend).  When Gene finally divorced his first wife in 1969 he and Majel married, after Star Trek had been canceled.

However, that wedding band on his finger was but a mere annoyance.  Family friend Christopher Knopf tells Eugene that Gene bragged about messing around on Majel within 7 days of marrying her.  Another family friend, Hilda Rolfe relates similar stories of Gene slipping away from parties he co-attended with Majel to boldly go to bed with a random girl he’d cornered outside of Majel’s view.  Majel apparently knew about it and the stories don’t seem to shock Eugene, though Trek Nation never has a moment in which Majel discusses the subject directly and openly.  Not mentioned in the documentary are the allegations that Roddenberry had an affair with Nichelle Nichols prior to casting her on Star Trek and well before his marriage to Majel in 1969.

Just because Nichelle Nichols was an African American woman in a major role on television in 1966 when that kind of thing didn’t happen didn’t mean she was doing her dream job.  In fact, she informed Roddenberry she was going to quit after the first season to re-pursue her true love, i.e., musical theater.  Then she met Martin Luther King, Jr., who proclaimed himself a Star Trek fan and that it was one of the only shows he and his wife allowed their children to watch.  When Nichols told him she was quitting, he laid the smack down in the most bad-ass, eloquent, Martin Luther King, Jr. way possible, telling her, “You can’t do that.  Don’t you understand that for the first time we are seen as we should be seen.  You don’t have a black role; you have an equal role.”  So, when MLK tells you not to quit you don’t quit.

4. Dorothy “D.C.” Fontana Was a Regular Peggy Olsen — The Trailblazing Female in a Male-Dominated World Part

Gene Roddenberry’s production secretary Dorothy Fontana was the first person to read his original 12-page treatment for Star Trek in 1964 because he thought so highly of her he valued her opinion.  By the time 1966 came around, she had briefly quit as his production secretary, insisting that she get a chance to actually write for the show even though it was a time when not a lot of women wrote for television shows.  Roddenberry didn’t want to lose her, and apparently had no problem with using a female writer.  So, he gave her a script which was in need of a re-write, and that turned into the first season episode “This Side of Paradise,” which we have argued elsewhere is the 2nd best Original Series episode ever.  Fontana claims that if the Network or other writers were uncomfortable with her around as a female writer she never heard or felt it due to Roddenberry’s influence.  However, her credited name D.C. Fontana did seem designed to make it less obvious the episode had been written by a female.  Plus, the documentary fails to cover this, but she ended up a credited writer for 8 Original Series episodes, three of which were written under the male pseudonyms Michael Richards or J. Michael Bingham.

5. The Fans Organized a Letter-Writing Campaign to Save the Original Series from Being Canceled After the Second Season 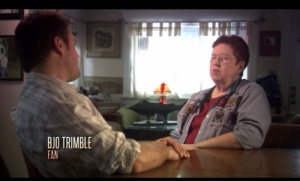 This is a pretty well-known story but not often as told from the point of view of a fan who was an active participant.  NBC was going to cancel Star Trek after its second season, which came to the attention of superfan Bjo Trimble upon a visit to the set.  So, she organized a letter-writing campaign dubbed “Save Star Trek,” designed to inundate the network with so many letters of support for the show that they wouldn’t dare cancel it.  In her recollection of the events, the first group of letters they mailed was approximately 20,000 strong.  It worked – they renewed it for a third season.  Trimble’s effort earned her a role in fandom history as the mother of the “save our show” letter-writing campaign to networks, and the Star Trek people were so grateful they gave her an uncredited cameo in the background of a scene in Star Trek: The Motion Picture over a decade later.  So, basically, you think you’re a fan?  Trimble is such a huge fan she has her own Wikipedia page.  Advantage?  Trimble.

6. Gene Roddenberry Was Present But Not Engaged with the Third Season of the Original Series

The show did get a third season, but it was moved to a 10 P.M. Friday night timeslot, i.e., a time and night most shows would fail in at the time.  Roddenberry viewed this as an obvious attempt on NBC’s part to placate the fans who wrote the letters (they were getting a third season) while completely killing the show (in addition to the horrible timeslot, the budgets were slashed by 10%).  So, Roddenberry all but quit what had been his baby, maintaining the title of Executive Producer while in reality the show was being handled by other people.  Eugene says Gene kept an office at the studio, would check in every now and then, but was the boss in title only.

7. The Writers of Next Generation Found it Almost Impossible to Work with Roddenberry 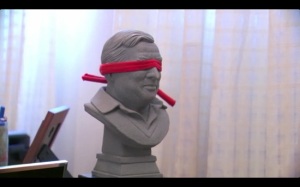 Next Generation/Deep Space Nine/Battlestar Galactica writer/producer Ronald D. Moore: “I think on some level Gene Roddenberry had been told so many times that he was a visionary of the future that he started to believe that and took on this mantle of, ‘I’m responsible to you the audience to project to you this vision of the future.”

Next Generation was envisioned as taking place in a Utopian 24th century future with no hunger, greed, need for possessions…and holy shit was it borrrrrrrring (at least at first).  Seriously, at times those early seasons of Next Generation are so boring they might as well be dubbed the Star Trek: C-Span years.  Roddenberry was adamant that there was to be no conflict between the core characters, with all conflict to originate from external sources.  So, those great arguments Spock and Kirk (or McCoy) used to have were off-limits on the new show, much to the serious chagrin to the new writers and Original Series holdovers like D.C. Fontana.   As a result, many of the writers (like Fontana) simply quit, thinking Roddenberry a man who had taken leave of his senses, completely forgetting the fundamental importance of conflict to drama.

When Roddenberry died in 1991 his successor, Executive Producer Rick Berman, initially attempted to ensure the show stayed true to Roddenberry’s vision of a conflict-free future.  Eventually, though, the writers forced Berman to cave in.  He symbolically placed a red blindfold over the eyes of a bust of Roddenberry’s face on his desk to indicate as much.  The same bust would probably have needed to also be gagged by the time the spin-off Deep Space Nine rolled out two years later.

8. Wesley Crushed Was Modeled After How Roddenberry Was as a Young Teenager

Wesley Crusher was the annoying Next Generation character who was far too often the solution to all storyline problems – no worries, genius boy Wesley is on the case!  As such, he was and arguably still remains the most hated of all Star Trek characters, even with his portrayer, Wil Wheaton, rising to geek fame over the past decade with work on The Guild, Eureka, and Big Bang Theory.  However, you know who really liked Wesley?  Gene Roddenberry, and one would hope so since he did create the character after all.  In fact, Wesley was apparently modeled after Roddenberry as a young kid.

Trek Nation gets the general sense of Roddenberry correct – a deeply flawed man with an incredibly visionary approach to science fiction that endures to this day and has changed many lives for the better.  However, there are plenty of details which go unmentioned, e.g., he has 2 daughters from his first marriage, wrote and produced the sexploitation film Pretty Maids All in a Row in 1971,  or underexplained, e.g., the Next Generation writers situation was so bad D.C. Fontana actually filed a Writers Guild grievance against Roddenberry.  Moreover, the feature length Star Trek films are barely mentioned, presumably because the focus is on Roddenberry and contrary to popular belief once you get beyond Star Trek: The Motion Picture Gene had nothing to do with any of the films other than getting an Executive Producer credit, percentage of profits, and ability to make script notes the real guys in charge mostly ignored.  Plus, there are always the rumors of his habitual drug usage throughout the 1980s.  Then again, if that was all true of my dad, and I was making a documentary about him I’d probably prefer not to go into too much detail about all of it, too.

Have you seen Trek Nation?  Like it?  Don’t like it?  Any other Roddenberry-related tidbits I missed?  Comments section…engage!