So, here’s what happened this weekend at the domestic box office: the adults saw Prisoners, the kids ignored Battle of the Year, and the nostalgia crowd turned Wizard of Oz 3D into a surprise hit in limited release. Insidious: Chapter 2 began its inevitable decline, but did it fall off at a rate we should find alarming?

Foreign: Also opened in a handful of other countries, such as Singapore and Netherlands, but there is no estimate as to its gross in those territories at this point.

Hey, September is a truly dreadful time for films, a dead zone, but over the past handful of years it’s also been when Warner Bros. has rolled out early prestige pictures that did decent business (The Town, Contagion) and Sony did the same with Moneyball in 2011 and Lionsgate with 3:10 to Yuma in 2007.  This is becoming like our first real palette cleanser after the summer movie season before the major prestige pictures arrive beginning in October, courting Oscars every step of the way.  As such, who knows if Prisoners will be an awards contender, but for at least one week WB’s provocative marketing strategy (emphasizing the number of days in a kidnapping investigation before you reach futility) paid off and made it a box office winner.  It appears to have good word-of-mouth, A- CinemaScore, but can it hold up or will it falter in the face of competition as well as a reflection of its challenging subject matter and depiction of violence (and long running time)?

Foreign: $4.5 million from the U.K./Ireland for a combined worldwide gross total of $65.4 million.  Also playing in Poland and the Philippines, but no estimate at the moment as to how its performing over there.

The second weekend is when most horror films die.  Are you going to go like The Exorcism of Emily Rose, The Conjuring, and Mama and manage to only drop off around 50% or less, or are you going to be like The Purge, The Devil Inside,and The Last Exorcism and drop off as high as 76% thus basically making all of your money in that first week?  Insidious: Chapter 2 ended up falling somewhere in the middle, falling a bad-but-not-terrible 64%.  This is in comparison to the first Insidious which didn’t fall more than 60% until its 9th week of release, only falling 29% in its second weekend.  So, basically people who saw Insidious loved it and told their friends to see it.  This process repeated itself, in theaters and on home video, often enough to create a sizable audience looking forward to Chapter 2.  It appears that this process will not repeat itself because Chapter 2 is not as well-liked.  So, while that opening weekend for Insidious: Chapter 2 was nice it’s not going to end up anywhere near The Conjuring‘s amazing-for-a-horror film final line of $136 million domestic/$149 million foreign/$285 million worldwide.  However, Chapter 2 also only cost $5 million to make meaning it should be crazy profitable for the studio by this point.

Foreign: It has grossed less than $1 million from just a couple of foreign territories.

It dropped 50% in its second weekend, which is honestly far better than expected.  However, expect The Family to truly begin its box office decline once heavy competition from many new releases happens next weekend.  The only chance for it to double its production budget now is to play huge overseas.

Foreign: Opened in Mexico this past weekend, its only other territory of release.  However, there is no estimate as of yet as to how much it made there over the weekend.

Now that’s more like it.  After dipping 50% last weekend, Instructions Not Included impressively rebounded nearly 20% this weekend.  This surprising surge allowed it to pass Amelie (2001) on the list of highest domestic grossing foreign language films since 1980.

5. Battle of the Year (Opening Weekend)

Foreign: Also playing in Israel, Kuwait, and Lebanon.  No estimate as to box office performance at the time of this writing.

Choreograph your asses out of here, dance movies!  Your days of box office relevancy appear to dang near over after Battle of the Year stalled at the box office just as recent dance movies like Step Up Revolution had.  Among dance movie to open on at least 1000 screens since 1977, this is the worst opening since Dirty Dancing: Havana Nights bombed with an opening weekend of $5.8 million in 2004 ($7.6 million at 2013 ticket prices).

Hey, did you predict that this mid-range raunchy comedy starring Jennifer Aniston and Jason Sudeikis would end up grossing over $200 million worldwide and stick around in the domestic top 5 for six weeks and the top 10 for at least seven?  If so, good for you.  Seriously.  Top notch work there.  We’re the Millers has now officially made more than prior R-rated comedies released in August like 40-Year-Old Virgin, Superbad, Pineapple Express, Tropic Thunder, and The Campaign, although after ticket-price inflation adjustments Virgin and Superbad would still qualify as bigger hits.

Actually, last weekend’s studio estimates were a bit off meaning The Butler came up just shy of crossing $100 million last weekend.  However, there’s no doubt about it now – it has officially made more than $100 million.

Poor, poor Riddick.  His special ability is that he can see in the dark.  That presumably means he could look out of the screen of Riddick wherever it may be playing at the moment to see darkened, half-empty theaters across the United States and Canada.  However, the rest of the world is a different story, where Riddick is pulling in some fairly respectable coin considering its modest $38 million budget.  This has allowed it to surpass Pitch Black‘s $53.2 million worldwide gross from 2000.  However, after you adjust for ticket price inflation Riddick will easily end up with the lowest gross in the ill-fated Riddick franchise. 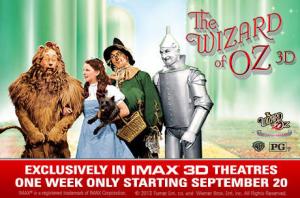 Foreign: Only playing domestically for a limited release.

One of the things the Hollywood studios loved about the wide adoption of 3D and ever-increasing adoption of IMAX theaters is that it provided an opportunity to easily retro-convert classic films to 3D for anniversary year limited releases, usually as a tie-in to also market a new home video release.  Disney was having a field day with this and their classic animated films.  However, over the past couple of years 3D re-releases of genuine classics like Raiders of the Lost Ark and camp classics like Top Gun have failed to bank more than $2 million.  As such, it’s a welcome surprise to see that this limited re-release of Wizard of Oz performed well enough to crack the top 10.  However, it’s a one-week engagement meaning you best get your bottom to a theater if you want to see the cowardly lion feel so alive via 3D that you’ll practically swear he’s jumped out of the screen and hidden behind your chair when things get scary.

With Cloudy with a Chance of Meatballs 2 on the way, Planes‘ time in the domestic top 10 is about to come to an end.  It will end up having failed to surpass $100 million domestic, and coming nowhere near even remotely resembling the type of money pulled in by its parent source, i.e., the Cars franchise.  However, the budget was kept so modest by Disney that Planes has turned into a mild hit.

Percy Jackson: Sea of Monsters, Elyisum, One Direction: This Is Us all left the top 10.

Actually, things should be straight up competitive, a welcome change for a September which has so far been a dark hole where movies not named Insidious went to die.  Want to see a fun, family-friendly animated film?  Boom, here’s Cloudy with a Chance of Meatballs 2.  What about a romantic comedy?  Baggage Claim and Don Jon.  Add in Thor in a race car (Rush) and a limited 3D/IMAX release of a Metallica documentary (Metallica Through the Never) and that makes for a very crowded weekend at the domestic box office.  However, pre-release tracking indicates Rush is due for a big debut.