To read our other Agents of SHIELD episode reviews please go here.

Here’s the Agents of S.H.I.E.L.D. formula thusfar: a cool, action-y cold open, title card, exposition where Coulson informs the agents on the plane what happened in the cold open, agents investigate, action sequence, plot twist, action sequences, resolution, characters share one-on-ones back on plane, pre-closing credits stinger.  The main episode that doesn’t quite follow the formula so far is the second, “0-8-4,” since its start-at-end-jump-to-beginning framing device negated the need for a cool cold open that sets up something the characters then investigate.   There’s nothing wrong with this particular formula let alone having one altogether.  It just makes things a bit predictable.  Well, predictable looks pretty good in “Eye Spy,” the show’s fourth episode.

After only three episodes, there have been some obvious commonalities among the criticism thrown SHIELD’s way: we want more Agent Coulson, more Melinda May, and a better defined function for Skye on the team as her redundancy to this point is hurting the show.  “Eye Spy” addressed all of those areas, finally giving us an Agent Coulson-centric plot, worked towards building the trust between Coulson and Melinda, and concocted a plot in which the roles for all of the team members received their clearest delineation yet.  The result was easily the finest effort in the show’s thus far short life.  It portends better things, and is an episode that seems strong now but will hopefully be eclipsed in quality as the season progresses forward with its slow-burn serialized stories.

The cold open? A group of men wearing identical suits and red masks and all having a metal suitcase handcuffed to their hand enter a subway train, trailed by an African American woman who somehow manages to take all of them out and steal the one suitcase which contained diamonds (the rest were empty).

The case? There have been a series of diamond robberies, the one on the train being the latest. The army of men were hired by a bank to transport the diamonds. Through Skye’s suggestion, they analyze Instagram photos made by people on the train and positively I.D. the African-American woman as being Akela Amador (Pascale Armand), an agent Coulson trained and long since believed to have died.

The investigation/action sequence? Coulson and Ward question residents of the town Amador is believed to be staying at, leaving Skye and FitzSimmons to provide tech support from the van.  Amador gets the jump on the van, using her own van to ram the other over a hill again highlighting how woefully unprepared those three are for field duty.

The plot twist? Amador has a bionic right eye through which she receives instructions like text messages sent through the eye and appearing in her field of vision.  She is being controlled by these messages.  Coulson’s belief in her innocence appears to be justified, to the delight of Skye but dismay of Melinda.

The character drama? Melinda does not trust Coulson’s judgment in the case, and operates independently in an effort to bring the woman in.  She learns that there is a fail save in the Amador’s ocular implant in that she has to follow her instructions or else the implant will be triggered to self-destruct and kill her.

The action sequence(s)? Amador is subdued by Melinda and Coulson.  Grant pretends to be her using tech support provided through a pair of glasses by Skye while Fitz and Simmons attempt to disarm Amador’s implant before her handler catches on that she’s been captured.  Coulson tracks down the Amador’s handler only to discover that he too has an ocular implant that self-destructs the moment he sees Coulson thus killing the poor guy.

The one-on-ones? Melinda should have trusted Coulson, Skye understands that through her Coulson is attempting to make up for past failures, and Amador accidentally lets it slip to Melinda that Coulson is so different than she remembers that SHIELD has to have done something to him.

The pre-credits stinger? Fitz attempts to con Grant at poker using Skye as his tech support with her spy glasses, but freaks out when he realizes Skye will be able to see through his clothes when she puts the glasses on.  With Fitz out of the way, Skye decides to use the glasses to see what Grant looks like naked.  Her slightly naughty smile signals her approval.

That’s more like it, dangit.  This episode had well-done action sequences, provided a little more background on Coulson while seemingly advancing his relationships with Melinda and Skye, and for once discovered exactly how to utilize Skye, Fitz, and Simmons.  Granted, Fitz and Skye still have far too much overlap, and Fitz needing Skye to crack a video feed using some Rising Tide tactics kind of cheapens his expertise.  And as others have pointed out how is it that Coulson’s team doesn’t have a member capable of administering life-saving medicine as Simmons is shown here to be the last person you’d want trying to save your life.

However, for once all of the characters made sense to me, and I enjoyed seeing them interact.  Plus, this is starting to remind me of the fifth season of Angel which initially appeared to be episodic before pulling all plot threads together in its final fourth, revealing that little characters here and there in the early goings were far more significant than we realized.  This seems like a standard mentor-student (Coulson/Skye) relationship being informed by exposure to the mentor’s prior student (Amador) type of episode.  However, who is the one behind capturing poor and Amador and turning her into a human terminator?  Similar to J. August Richards in the show’s pilot, Pascale Armand’s performance as Amador was so strong that I really hope to see her again.

1. Who Wasn’t A Little Let Down By The Men in Red Masks? 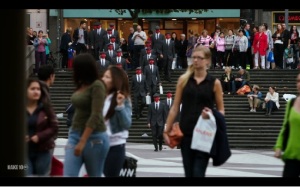 Introducing us to an army of identically-costumed, red-masked men at the beginning of the episode is beyond intriguing, with many suspecting from early trailers these men would be members of an Anonymous-like organization.  As such, it was effectively startling when they were easily bested by a single, mysterious woman.  It was an effective bit of writing by giving us a brief glimpse at something which appears intimidating and then taking them out with ease, thus establishing their conqueror as a true bad-ass providing capable opposition to the good guys.  But, still…an army of guys in red masks don’t get to do anything cool.  Boo!

2. The Woman Who is Actively Lying to You Saying That She Trusts Your Judgement of Character Is Hard to Take

We know that Skye received a message at the end of “0-8-4” from Rising Tide which indicated her joining S.H.I.E.L.D. is part of a plan to place her as a covert spy for Rising Tide.  We know that Grant does not completely trust her.  Same goes for Nick Fury.  However, we don’t know what Coulson thinks.  For Coulson to be so easily duped by Skye undermines the show’s ostensible central character (although, arguably to this point Skye has been the show’s main character).  As such, I’ve seen a lot of fans who assume the best for Coulson and think that he’s on to Skye, attempting to keep his enemy close and perhaps persuade her to his side in the process.  Clark Gregg’s performance is not completely giving it away one way or another.  Case in point, Skye has a sweet character moment with Coulson in “Eye Spy” where she essentially thanks him for believing in her.  It’s a moment in which a woman who is actively lying to Coulson says she trusts his judgement of character.  However, when you look at Gregg’s reaction shots during the scenes it’s hard to tell whether Coulson is supposed to be appreciating Skye’s support or if he is slightly bemused by her trusting in his judgement (kind of like “that’s funny coming from you”).  The trailer from next week indicates we’ll find out, but I don’t trust that trailer at all.

3. Watching Yourself About to Be Attacked?  Now That’s Cool Spy Stuff 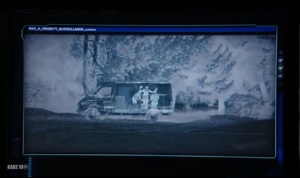 If Skye, Fitz, and Simmons continue to be placed in danger in the field of combat in future episodes I’m going to start believing it’s laying the groundwork for eventually killing one of them off.  However, for now I enjoyed watching the sequence where they realized they were about to be attacked even if it somewhat cheapens them that they took so long to figure it out.

4. What if Simmons Turns Out to Be a Spy?

In Joss Whedon terms, so far Simmons comes off like a British version of Fred (Amy Acker) from Angel.  However, Elizabeth Henstridge is no Amy Acker.  Her constant smile and nervous moments look to me like a woman pretending to have a constant smile and social awkwardness.  As such, much as Acker in both Dollhouse and Angel had her roles completely reversed during the run of those respective show I suddenly want Simmons to drop the act and speak with supreme confidence, turning out to be a bad guy.  Is this going to happen?  Ah, hell no.  I don’t think there is anything more to her than surface level, but it amuses to me to concoct scenarios in which there is.

What did you think?  Like it?  Hate it?  Let us know in the comments section.