To read our other Arrow episode reviews please go here.

With “Broken Dolls,” Arrow just went to a very dark place, perhaps reasoning that if shows like The Following and Hannibal can get away with some incredibly twisted content why not add in some creepy sociopathy to Starling City.  They gave us a comic book-based villain, The Dollmaker, who is sick enough to get his kicks killing young women in such a manner that leaves their corpses looking like porcelain dolls.  The imagery was never overly extreme, but the general concept felt like new territory for the show.  Before this point, Oliver has battled a series of normal villains with more basic motivations, typically either greed or a need for vengeance or both.  We’ve had a cackling Seth Gable as a version of Count Vertigo who is just a drug dealer, a sneering James Callis as the Dodger, a taunting Michael Rowe as Deadshot, and John Barrowman as a “what part of the dead wife card aren’t you getting?” version of Malcolm Merlyn.  Even the Royal Flush Gang, Blackhawk, and Firefly received rather grounded adaptations, and China White, Bronze Tiger, and Sebastian Blood are all still in the mix alongside Isabel Rochev.

Heck, many viewers probably have no idea about the comic book backgrounds for these characters.  On the show, these are disgraced firefighters, vengeful widowers, down on-their-luck 99%’ers, and money making schemers.  The Dollmaker is a serial killer who turn women into practical porcelain dolls.  That’s some Batman-villain-level crazy, and it could have felt like something too different for this show.  However, I loved it!

Canary literally drops in through the glass ceiling to save Oliver from Laurel’s trap, sets off a super sonic device to momentarily disarm everyone, and make a getaway with Oliver.  Oliver subsequently charges Roy with tracking her down so he can better understand her motivations.  Roy uses his ears on the street to track down a young woman named Sin who might have information.

Through a parkour-heavy chase, Sin leads Roy to a clocktower where Canary questions him, realizes he’s no threat, and lets him go while she leaves to save Laurel’s life.  We later see a member of the League of Assassins arrive to bring Canary back to R’as Al Guhl.  She stabs him real good in the neck when he won’t accept no as answer. 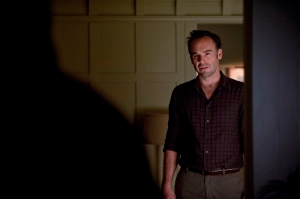 Oliver’s quest to track down Canary takes a back seat to a plea for help from Office Lance, who has learned that Burton Mathis, an insane sociopath he arrested, escaped from prison during the undertaking and is back to killing in the way I described above.  Officer Lance isn’t allowed anywhere near the case because the cops in charge are big, stupid do-do heads.  So, we get a Commissioner Gordon-Batman-esque sequence atop a rooftop where Lance asks for Arrow’s help.  The two work together, Lance somehow never quite seeing Oliver’s face.  They are unable to save the Dollmaker’s latest victim, who is killed while Lance helplessly listens on the phone.  This leads to some investigatin’, a cool sequence where Felicity is used as bait while Lance and Diggle monitor on scene on ground and Oliver from rooftop…

…a near arrest, and the Dollmaker capturing both Lance and Laurel to kill Laurel while Lance watches.  Oliver shows up to save Laurel, but his efforts to use non-lethal tactics with Dollmaker are all for naught when Canary simply kills the bastard.  The experience forces Laurel to realize and accept her guilt in Tommy’s death, justifying her father’s earlier claims her vendetta against the vigilante was an exercise in displaced anger and guilt.

Prior to her pre-trial hearing for her part in the undertaking, Moira counsels Thea against optimism as she believes she will be in prison for the rest of her life.  However, around as fast as an audience member could ask, “Wait, is life in prison all she’s going to get?  What about the death penalty?” the actual pre-trial hearing reveals that the District Attorney plans to pursue the death penalty.  Oliver promises it wont happen, but Moira seems more concerned about keeping secrets, refusing to divulge all details to her lawyer as there are apparently more dirty deeds from her past we don’t know about.  Arrow Executive Producer Marc Guggenheim must have enjoyed putting his law degree and pre-Hollywood life as a lawyer to use in co-writing this episode. 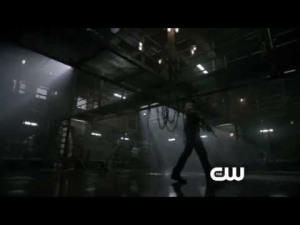 Oliver and Slade leave Shado alone while they seek higher ground to check out Slade’s hunch that there is a boat off-shore.  He’s right – yay!  The boat fires on their location – boo!  Oliver charges recklessly forward to save Shado, Slade chases after him, they both fall admist heavy weapons fire, Slade earning severe burns to either his face, hands, or both in the process.  Oliver awakens to find himself a prisoner on the boat, with Arrow apparently deciding that the Christopher Nolan mimicry must now extend to a Dark Knight Rises-esque prison escape for Oliver.  The name of the boat is a DC comic book easter egg for those who care as was a reference to a Metamorpho van earlier in the episode.

Of course, just because quite a lot happens does not make an episode good, as too much story can result in feeling overstuffed.  However, other than just the general “what the hell?” ending of the island flashback sequences I can find nothing to heavily criticize here.  The closest might be the resolution of Laurel’s storyline, which felt a bit like Laurel was taking way too long to reach an incredibly obvious conclusion (although grief can do that to you).

Plus, the dialogue might have gone a little too out of its way to really make sure we get just how much Laurel and her father have switched roles this season.  However, with an ever-expanding roster of characters “Broken Dolls” managed to find significant moments for every major character other than maybe Diggle, a lesson in character and story development currently lost on the still-figuring-itself-out Agents of S.H.I.E.L.D.  Plus, for lack of a better description seeing Officer Lance partner with an incredibly efficient and on-their-game Team Arrow for a week was just, well, so cool.  You know, before Laurel was almost turned into a porcelain doll and everything.

Actually, for the first time this season Oliver didn’t open the episode shirtless, although being a direct continuation from last week’s cliffhanger has a lot to do with that.  They do manage to sneak in a quick shirtless scene with him, though, when he and Diggle spar in the Arrow Cave while Felicity researches the Black Canary.

There have been three villains to bear the name The Dollmaker for DC, the first a villain for Plastic Man and the second for Supergirl.  The version used in “Broken Dolls” is based upon the most recent Dollmaker, who was only just recently introduced as a Batman villain in D.C.’s rebooted new 52 continuity.  The comic book version of Burton Mathis is a gifted surgeon who creates dolls out of the skins and limbs of his victims.  He’s engaged in a feud with Commissioner Gordon, but is most notable for being the man who cut off The Joker’s face as per the Joker’s request.  This lead to a remarkably creepy Joker story arc called “Death of the Family” in which the Joker’s appeared to have had his face awkwardly re-attached.  While not as grisly, Arrow‘s notion of a version of Mathis who uses a chemical formula to kill women in a way that leaves them looking like porcelain dolls is arguably even creepier than the deeds of his comic book counterpart.

Like The Dollmaker, Sin is actually a relatively recent comic book creation, making her first appearance in Brides of Prey in 2006. She is an ideal choice for introduction in Arrow since her comic book history is intertwined with Green Arrow and Black Canary, and she has no superpowers beyond mere excellent but normal martial arts skills.  In the comics, Sin is a young girl Black Canary encounters while training in a remote Asian village.  Her real name is unknown as Sin was a title used by the villagers to dehumanize her.   Eventually, Canary departs the village, taking Sin with her to raise as her foster daughter (giving her the legal name Cynthia Lance).  Since that time, Sin has been placed in peril by bad guys on multiple occasions, and after the League of Assassins became convinced she was destined to become their new leader Green Arrow faked her death (without telling Canary it was fake).  Arrow’s version of the Sin/Canary relationship at this stage most closely resembles the way Catwoman was shown to look out for the street hustler Jen in The Dark Knight Rises (a dynamic lifted straight from Frank Miller’s Batman: Year One, where the relationship is far more explicitly sexual).

Black Canary has a comic book history that goes back as far as 1947.  As such, there is a lot of story to drudge through.  The basic gist is that Dinah Drake Lance was trained by her policeman father to fight crime, but when she was turned down by the police force she chose to honor her father by becoming a vigilante.  During the day, she ran a simple florist shop, but at night she was the Black Canary.  Eventually, she gained additional attributes, such as legendary martial arts skills and a rather shakily defined super sonic scream.  She married her love interest, Larry Lance, a private investigator, and the two had a daughter they named Dinah Laurel.  By the time Dinah Drake retired as Black Canary, her grown daughter wished to follow in her footsteps, training with various Justice League/Society members to become an expert at martial arts and benefiting from a genetic mutation which naturally gave her a super sonic scream.  Against her mother’s wishes, Laurel became the new Black Canary, also working during her days at the family florist shop in Gotham City.

The version of Laurel Lance on Arrow combines aspects of the Canary backstory from the comics and molds them onto something closer to Rachel Dawes from Batman Begins and The Dark Knight, the attorney played by Katie Holmes and then Maggie Gyllenhaal.  However, this particular version of Canary (whose real name we do not yet know nor has she even called herself Canary) depicted on Arrow is completely unique to the show (as far as I know).

5. So, Malcolm Definitely Trained With the League of Assassins, Right?

The member from the League of Assassins who Canary easily kills at the end was dressed exactly like Malcolm when he was the Dark Archer, seemingly confirming suspicions that the mysterious man who transformed Malcolm was someone in the League of Assassins (probably R’As Al Guhl).  This means that not only is Arrow ripping its playbook from Christopher Nolan they are now using Batman villains as well, with the Dollmaker a new 52 Batman villain and R’As Al Guhl primarily a Batman villain as well.

What did you think?  Like it?  Hate it?  Let us know in the comments section.