Despite Peter Jackson, Philippa Boyens, and Fran Walsh’s best intentions, it was always a horrible idea to adapt a 300-page children’s book into three films encompassing nearly 9 hours of film.  Yet that’s what they’ve done with the Hobbit, entering its second installment in Desolation of Smaug.  Sure, they are actually adapting both The Hobbit and J.R.R. Tolkien’s “history of Middle Earth” Appendices from the end of The Return of the King.  This way they can actually show us where Gandalf keeps going off to all those times he just disappears in The Hobbit novel, but even then their Hobbit films continue to feel over-stuffed.  The Desolation of Smaug is mostly an improvement in that area over An Unexpected Journey, but it is a film which still takes way too long to get going and then ends far too soon.  Here are some things which felt unnecessary to us or at least didn’t make sense:

[SPOILERS AHEAD FOR DESOLATION OF SMAUG & THE HOBBIT NOVEL]

1. Tauriel is Kind of Awesome, But What They Have Her Doing Is Not

If you’ll pardon the expression, The Hobbit and Lord of the Rings novels are basically sausage fests.  There’s a bunch of dudes making incremental progress on their journey until they suddenly get there pretty quickly.  That doesn’t leave much room for female characters or romance, with perhaps the greatest potential romance being the homoerotic tension between Frodo and Sam..  This is not to say Tolkien couldn’t write compelling female characters.  After all, Eowyn’s stance in front of the Witch King in Return of the King is about as girl power as it gets, and one of the most powerful beings in the entirety of the story is Galadriel.

However, Tolkien just didn’t bother to make much room for women in his fictional universe.  So, Jackson, Philippa Boyens, and Fran Walsh had to compensate in The Lord of the Rings by upping Arwen’s screentime, giving her actions originally performed by a male character in the novels.  They also heavily relied upon the Return of the King Appendices to add even more tragedy to her romance with Aragorn.

The Hobbit is even more bereft of female characters.  So, with Desolation of Smaug they created an entirely new one: Tauriel (Evangeline Lily). They didn’t even have to stretch too hard to do it as the dwarves do get placed in prison by the wood elves in the story.  What if the captain of those keeping guard of the prison just happened to be a woman?  Some have objected to the insertion of Tauriel into the story whatsoever.  The bigger question is why they bothered to create a badass she-elf who is just as crafty with a bow and knife as Legolas (Orlando Bloom) only to then saddle her with a love triangle.  Even Lily doesn’t like it, telling Yahoo Movies she made Jackson promise before she signed on the dotted line that her character wouldn’t simply end up in a love triangle.

Yet here she is torn between Legolas and the handsome dwarf Kili (Aidan Turner).  Why does the film even need this element whatsoever? A plot device to get Tauriel and Legolas out of their home and into Laketown?  Basically, but you could get Tauriel and Logolas to Lakewood without turning Kili into a mansel in dstress.  On multiple occasions, Tauriel laments the intransigence of Thranduil, arguing in favor of the elves becoming more active in the world outside their borders.  You could have her simply tracking the orcs and dwarves to see what they’re up to.  Legolas, frankly, does not even need to be in the story at all other than serving as nostalgia and one leg of a triangle.

In an interview with Vulture, Philippa Boyens explained the romance was their way of making up for something they previously screwed up, “The Galadriel-Gimli story had these two races who loathe each other, and Gimli’s dark, dark suspicion about elves and about the fact that he had heard of this woman, Galadriel, and he calls her the witch of the wood, but when he meets her, it all falls away. We always loved that story, and we never got to tell that properly in The Lord of the Rings.”

Their second effort at it with Tauriel and Kili is not a failure, necessarily.  With the coming hostilities between the elves and dwarves in the third movie, Tauriel is a way to bridge the gap between the two.  However, if they’re going to just add completely new characters and material to the story it better be amazing, and this ain’t that.

2. Are You Kidding Me With That Ending?

The entirety of An Unexpected Journey and first two hours of Desolation of Smaug are basically a very, very long journey getting to Smaug.  Thankfully, Smaug turned out to be a stupendeous creation, yet another CGI achievement from Peter Jackson’s effects company Wetta.  Plus, Benedict Cumberbatch’s sly and foreboding vocal performance is effectively chilling.  I was relatively certain I was going to miss him once he was killed, but I couldn’t wait to see it happen.  And then nothing.  The movie just flat out stops, Bilbo lamenting, “What have we done?” as a seriously pissed off Smaug descends upon Laketown announcing himself as the arrival of death.

This is an incredibly similar ending to that of Harry Potter: The Deathly Hallows: Part 1, which ends on a down note of the heroes having failed since the ultimate evil of the story has attained a weapon of doom.  There is no resolution or closure – the story just stops.  However, that felt more like allowing the audience several months to simply catch their breathe whereas Desolation of Smaug takes so long to finally get going showing us the dragon but not the dragon’s death makes all of the extra padding feel all the more extraneous.

3. How the Heck is Smaug So Up to Date On Current Events? 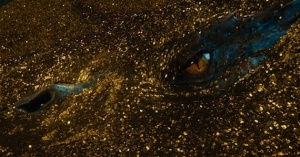 During his introductory sequence with Bilbo in the Lonely Mountain, Smaug emerges not merely as a simple physically imposing, ginormous dragon but is also instantly the type of engaging villain who is several steps ahead of the protagonist.  It’s captivating how quickly we realize he knows exactly what’s happening, but is letting Bilbo keep up the charade because he finds it amusing.  He even alludes to Sauron in ominously describing a greater darkness on the horizon.

However, hasn’t Smaug been hibernating in the mountain for more than a hundred years?  So, how is he so up to date on current events?  How does he know about the imminent return of Sauron? He does he even know Thorin’s (“Oakenshield”’s) name let alone what Thorin is looking for?  We are meant to believe that much of it has simply been deduced by Smaug, who references having long since expected the presumptive king of the dwarves to return to challenge him.  How does he know about Sauron, though?  Can the bad guys of Middle Earth somehow sense each other’s presence?

Luke Evans is fantastically brooding as Bard, a minor presence in the novel who is mostly distinguished by [NOVEL SPOILER] killing Smaug with the last quiver of his arrow [END NOVEL SPOILER].  Here, not only have they expanded his background considerably they’ve also massively expanded upon the entire story behind Laketown.  In the process, they completely waste screentime with Stephen Fry as a corrupt, controlling leader of Laketown who seems at one point as if he is about to break out into song like a Disney villain describing the stupid working class.  They then establish Bard as being in opposition to Fry’s character, making Bard a revolutionary figure.  It turns out Bard’s father failed to kill Smaug all those years ago just as Thorin’s father and grandfather’s stockpiling of gold was the cause of Smaug’s intrustion in the first place.  This is all means to make us root for the now tragically heroic Bard once he kills Smaug in the third and final film.  However, it’s because of all this extra explanation the forward momentum drags its feet so much that we actually end this movie without a proper climax.

5. There’s No Emotional Through-Line This Time Around

The primary story of An Unexpected Journey involves Bilbo Baggins coming to terms with the quest he has been sort of tricked into by Gandalf.  The story ends with Bilbo delivering a nice-enough speech explaining how his desire to see home inspires him to continue assisting Thorin and his dwarves as he sympathizes that they have no home.  Plus, Thorin embraces Bilbo, abandoning his doubts as to Bilbo’s worth.  Desolation of Smaug shifts its focus in its opening scene to Thorin, and there are clear attempts to establish how he is becoming corrupted by his thirst for the Arkenstone.  However, it’s all foreshadowing with no pay-off and no conclusion.  Bilbo is somewhat cast aside, granted a brief but nice scene detailing how the ring is beginning to corrupt him. 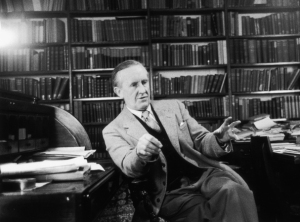 Those who criticize Jackson and company for re-writing The Hobbit in their adaption should probably cut them a little more slack.  Why?  Tolkien did the same exact thing.  In the original printing of The Hobbit Gollum’s ring is not that big of a deal.  Gollum actually bets his ring on the outcome of his riddles in the dark with Bilbo.  When Tolkien’s publisher requested a sequel in 1937 they weren’t nearly specific enough.  So, Tolkien gave them The Silmarillion, which they suffered the misfortune of reading.  They rejected it, and had to be more specific, telling him, essentially, “No, we meant a sequel more about the hobbits.”  Tolkien then wrote The Lord of the Rings, at which point he realized Gollum’s simply losing the ring to Bilbo in a bet made no sense anymore.  So, by the time of The Hobbit’s second edition in 1951 the story was altered to now have Bilbo find Gollum’s ring in the cave, and then steal it from an incensed Gollum after their game of riddles. Tolkien wasn’t done, though.  In 1960, he started rewriting the story to better match the tone of The Lord of the Rings.  The publisher made him stop because his new version sacrified the original’s the signature quick pace and adorably light tone of the original.

Jackson & company are basically doing that for Tolkien now, and after having gloriously adapted the three Lord of the Rings novels they have become the new modern co-authors of The Lord of the Rings and The Hobbit.  Some of what they are doing so far with The Hobbit films can be seen as actual improvements dictated by a need to raise the narrative stakes and make clearer connections to the Lord of the Rings.  Plus, some of their new material is simply coming straight out of the Appendices with a couple of their own embellishments.  Unfortunately, most of their additions have not felt like completely necessary story elements but instead rather obvious attempts to eat up screen time and stretch this all out, making more out of The Hobbit than is really there.

If you like this, check out our other “Nitpicking” Articles