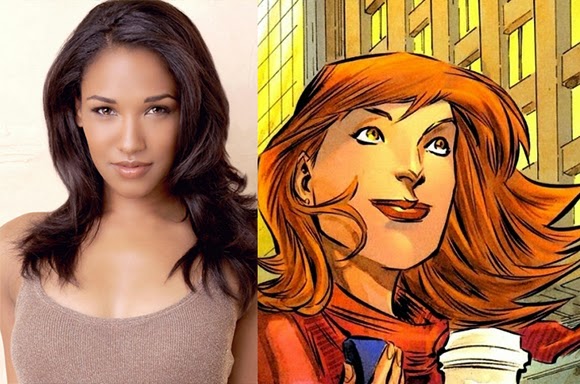 First they cast Grant Gustin as Barry Allen who showed up on Arrow where he was all awkward smiles, trailed off sentences, and poorly set up monologues about his tragic past–and we ate it up with a spoon.  We know Felicity Smoak sure did.  Then they cast Jesse L. Martin to play Allen’s surrogate father figure Detective West.  In less than a week after that, they cast two potential villains with Rick Cosnett as Detective Eddie “Professor Zoom” Thawne and Danielle Panabaker as Caitlin “Killer Frost” Snow.

If you haven’t been following the casting rumors to this point you’re immediate reaction might be the most obvious one: They cast a non-Caucasian to play the always Caucasian-in-the-comics Iris West?  Yep, Candice Patton will be a different shade of Iris West.  Beyond the skin color thing, she won’t even be a news reporter nor even on the path to becoming one in the pilot much like how Arrow‘s Laurel Lance still has shown no interest in pursuing her comic book counterpart’s career (as a florist).  Iris will, however, be a love interest for Barry Allen just as she is in the comics, where the two eventually married.  If you recall, Barry Allen empathized with Felicity’s potentially unrequited feelings for Oliver Queen on Arrow by explaining he knew what it felt like to love someone who doesn’t love you back. [Potential Spoiler] Casting call sheets revealed this to be a reference to Iris West since Allen’s altered origin story for the Flash TV series will see him having been taken in by Detective West while still a young kid after the death of his mother and conviction of his father for her murder.  Having grown up with him, Iris will see Barry as a best friend while Barry will be hopelessly in love with her.

Patton’s credits include the role of Tori on The Game, as well as appearances in Rizzoli & Isles, CSI: Miami,Harry’s Law and Grey’s Anatomy.  Along with Jesse L. Martin, she is but one part of the slightly more racially diverse cast of Flash compared to Arrow. That leads us to…

Carlos Valdes as Cisco Ramon.  Where might you have seen him before?  Broadway.   According to CinemaBlend, he “currently stars as Andrej in Once, but his previous credits also include the touring version of Jersey Boys.”  Just to quickly point this out: Valdes has a Broadway background, Jesse L. Martin was in the original cast of the musical Rent, and Grant Gustin’s prior claim to fame was a recurring role on Glee.  How long is it into the run of The Flash before we get a musical episode?  Back on point, in the comics Ramon is basically a latino gang member who became a superhero named Vibe once he gained the ability to cause sonic shockwaves and detect interdimensional shifts.  At the time of his introduction in the mid-1980s, he was criticized for being an ethnic stereotype.  DC give Vibe a big push in the New 52 with his own monthly series penned by Andrew Kreisberg.  It didn’t catch on, recently ending its run after just 10 issues.  It’s 100% not a coincidence then that Ramon is popping up as a regular character on The Flash since it is being co-created by Andrew Kreisberg.

Folks – we now have a good idea of what the (semi)regular cast for the potential Flash TV show will look like: three white people, two African-Americans, and a Latino, almost all of them young and CW-attractive.  Don’t go falling in love with any of them, though.  Any one of them could end up being recast for a wide variety of reasons between now and when the general public might have a shot at seeing this thing, trusting the CW actually likes the pilot enough to order a full season of episodes.  Plus, do you remember that beloved maid from the Arrow pilot who totally seemed like she’d become Oliver’s confidante?  Probably not because she was never seen again, completely dropped from the show just like so many other characters or story elements shows decide to jettison between the pilot stage and full season order.  Iris and Detective West seem too integral for that to happen here, though.

The Flash is being co-created and produced by Arrow writer/DC Chief Creative Office Geoff Johns and Arrow co-creators/executive producers Greg Berlanti and Andrew Kreisberg.  Prior reports indicate the pilot could be begin filming in March at which point he will be directed by David Nutter, who also directed the Arrow pilot.

What do you think of this casting choices?  Let us know in the comments section.