Superman celebrated his 75th anniversary last year, and now it’s Batman’s turn this year.  However, Captain America is the one who actually has a new movie coming out this year, which marks the 74th anniversary of his first appearance in the comics.  Captain America is so old (how old is he?) that he premiered decades before Marvel Comics was actually called Marvel Comics (you call that a joke?  that was a terrible punchline!).  First, they were called Timely Comics, then Atlas, and then Marvel.

So, in anticipation of The Winter Soldier let’s look at some notable as well as lesser-known elements of Cap’s 74 year history.  It all started with a stray punch thrown at a mad man:

1. Captain America’s first cover featured him punching out Adolf Hitler even though we weren’t actually in the war yet 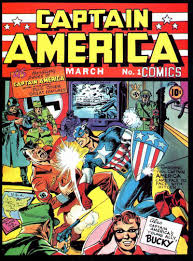 Created by Joe Simon and Jack Kirby, Captain America debuted in Captain America Comics #1 in December 1940, a year before the United States entered World War II.  Anti-Nazi sentiment was such that the star-spangled Captain America taking it to Adolf Hitler made the comic an instant success, but financial gain wasn’t Simon and Kirby’s only aim.  They firmly believed America needed to intervene in the war, and Captain America was their way of putting that thought out there.  Of course, once we did enter the war Captain America became crazy popular, selling a million copies a month.

2. That round shield only came about due to a need to avoid a potential lawsuit

Simon and Kirby were not the first ones to create a patriotic super hero.  MLJ Comics beat them to it with The Shield, who premiered in January 1940.

Born Joe Higgins, The Shield gained super strength and invulnerability thanks to a chemical created by his scientist father.  He put these powers to use working for the FBI, fighting against war-time saboteurs and spies.  His the chest plate was pretty much identical in shape and color design to the triangular shield held by Captain America on the cover of his first issue:

MLJ had every right to pursue legal action, but instead simply kindly let Timely’s publisher, Martin Goodman, know that they had a bit of problem with Captain America’s shield.  This was because MLJ’s co-founder, Louis Silberkleit, was friends with Goodman.  It was too late for Goodman to make Simon and Kirby undo that first issue with the original shield, but they did introduce the now-iconic round shield in the second issue:

Sidenote: MLJ would soon thereafter chart an entirely new identity for itself when it premiered a young teenager named Archie Andrews.  Within a year, MLJ was re-named Archie Comics.

The comic book industry seems to rival music publishing for the vile ways in which the content creators have been historically screwed by the publishers.  However, things started off surprisingly well for Joe Simon and Jack Kirby, who got a signed contract from Martin Goodman guaranteeing them 15% of all Captain America profits.  Plus, they received salaried jobs at Timely, but Goodman quickly used creative accounting to screw them over on the royalties, massaging the numbers to make it appears as if Captain America barely turned a profit despite each issue selling a million copies.  So, Simon and Kirby  left for higher salaries at DC Comics, at which point Goodman refused to continue delivering their contractually-obligated royalties payments.

When the copyright for Captain America went up for its first renewal in 1967, Simon saw an opportunity to re-take his creation.  In the years prior to this point, Kirby had reached a settlement with Marvel entitling the company to his half of the copyright, but Simon felt he had a legal to the other half.  By his estimation, he had delivered the character to Timely in 1940 as an independent worker, and he should maintain a stake in the character’s fortune.  Yeah, not so much.  He lost that battle in court and settled with Marvel in 1969.

4. Post-WWII, Captain America became a school teacher, and then a paranoid “Commie Smasher”

Stan Lee took over the writing duties for Captain America after Simon and Kirby left, but he was at a loss as to how to use the character after WWII.  What need is there for a Nazi-killer anymore?  So, Steve Rogers became a schoolteacher by day who fought crime as Captain America with sidekick Bucky just like any other superhero.  Eventually, Bucky was shot, and Rogers’ girlfriend Betsy Ross became Captain America’ new sidekick: Golden Girl!

Sales kept declining, but they attempted a last-ditch new supernatural direction, re-naming the book Captain America’s Weird Tales: “One issue had Cap dragged to Hell, and winning his freedom by knocking out the Red Skull. The second didn’t have a single Cap story in it. And that was the end… at least for a while.” 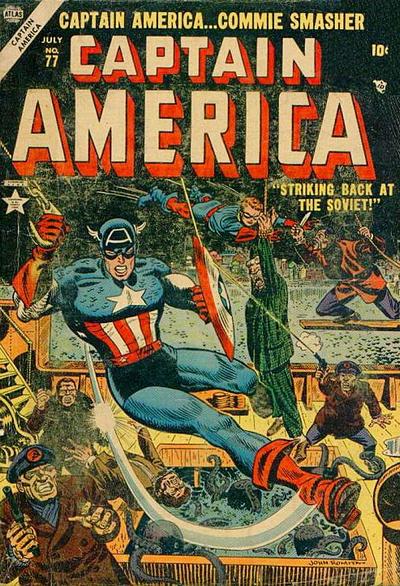 Though this new run barely lasted a full year, it read like a McCarthian wet dream:

“Communists were everywhere. They were in the press, in the government, and in the army. Random passersby would reveal themselves as Communist spies and throw themselves at Cap. And he performed his Caply duties with vigor, beating every Communist he could into a wet mess.”

All involved parties came to deeply regret this period of the character’s history.  Cap was revived in the early 60s with his now well-known back story, i.e., WWII super soldier frozen on ice, suddenly revived several decades later.  In 1972, they retconned that the 50s cap was actually a pretender who had gone through plastic surgery, made his own super soldier serum, recruited a Bucky look-alike, and then subsequently went bat-shit crazy due to the hallucinogenic effects of the serum.  Sure.  As far as comic book retcons go, that’s fairly reasonable.

5. The President of the United States became the bad guy during the Nixon administration

There was a shake-up behind the scenes at Marvel in the early 1970s which resulted in Steve Englehart inheriting the writing duties for Captain America from Gerry Conway, who left the company after being passed over for promotion to editor in chief.  Englehart introduced more social commentary and weaved in concepts like pacifism and scenes of antiwar protest.  However, he took it way further during Watergate when he made the President of the United States the villain in the comics. 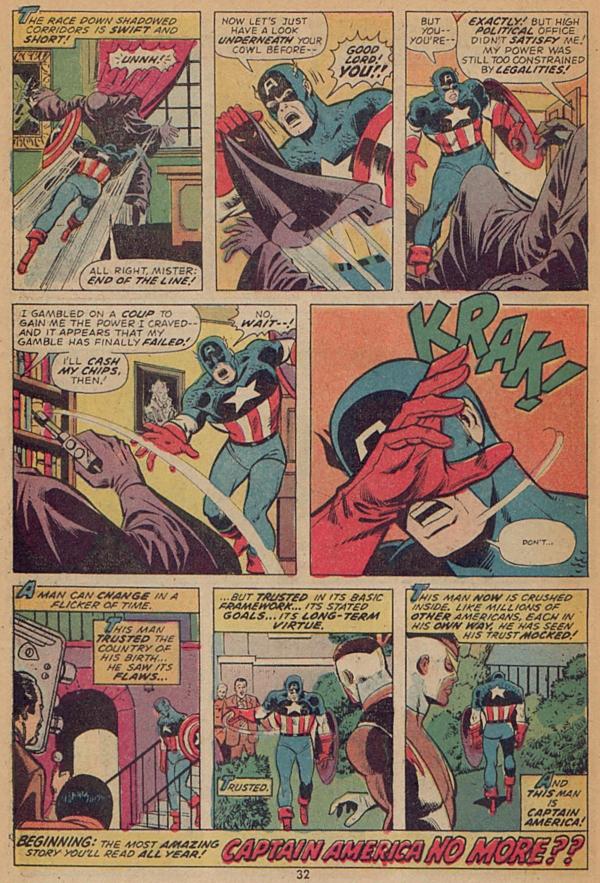 In the “Secret Empire” story line, a villainous group attempt to ruin Captain America’s reputation and take over the world.  They were meant to subtly represent the Nixon administration, but subtext rapidly became text when Captain America discovered the head of the Secret Empire was none other than the President.  Englehart decided at the last minute not to show the face of the President as being Nixon, but it’s clearly supposed to be him.  The resolution of the story featured not-Nixon committing suicide due to his overwhelming guilt, and a despondent Captain America pulling a real Spider-Man by by transitioning into his next big story called “Captain America No More?”

6. Captain American once had a gay best friend

The year was 1982.  Harvey Milk, the first openly gay person elected to public office, had been assassinated 4 years earlier, and AIDS had just been discovered.  So, for whatever reason, Marvel decided the time was right for Captain America to have a gay best friend in the form of Arnie Roth, an old childhood friend who needed Cap’s help to save his “roommate” (read: longtime gay lover, the Bert to his Ernie) from being turned into a monster by a run-of-the-mill bad guy.  Cap succeeded, at first, but the “roommate” would later die in a standard “turned-into-a-monster” accident.  So, oops.  Hope you can find the power to move on with your life Arnie.

7. Captain America was originally supposed to die the early 80s

Jean Marc DeMatteis was the writer for Captain America in that era, and to mark the 300th issue of the title he proposed a bold new approach in which Cap would go all Superman IV: The Quest for Pace on us and try to make the world a better place without resorting to violence.  In other word, Cap would become a pacifist.  What would be his reward? Getting assassinated by his buddy Jack Monroe, aka Nomad, who would have been manipulated by the bad guys into thinking ole Cap was out to hurt America.

And that would be it for Captain America.  DeMatteis was going to replace him with Black Crow, a Native American superhero he had created and introduced in an earlier Captain America issue.

All of this was approved by his editor, Mark Gruenwald, but once word of it made it up to the editor in chief, Jim Shooter, it was killed instantly.  Shooter nixed DeMatteis’ plans entirely, and rewrote the 300th issue himself.  In protest, DeMatteis quit, but his old editor Gruenwald ended up replacing him, writing for Captain America for the next 8 years.

Source: Brian Cronin’s Was Superman a Spy?: And Other Comic Book Legends Revealed