You can see our other Nightmare on Elm Street lists here. Today, it’s time for Wes Craven’s New Nightmare (1994), aka, the very meta one which no one saw but totally should have because it’s awesome

New Line genuinely meant for Freddy’s Dead to be it for the Elm Street franchise. They held a mock funeral and everything. They just didn’t know at the time they were going to get Wes Craven to come back. What he gave them was something ahead of its time: a meta-cinematic Nightmare on Elm Street movie which was quite literally about the Nightmare on Elm Street movies. It pre-dated Kevin Williamson’s meta-cinematic masterpiece Scream by 2 years, and could be said to be Wes Craven’s trial run for how to do this whole meta thing:

From this point forward, unless otherwise noted all quotes come from Never Sleep Again: The Elm Street Legacy.

1. It started when New Line reached out to Wes Craven to settle any lingering hostilities

Wes Craven never wanted Nightmare on Elm Street to become a Friday the 13th-like parade of endless sequels, but his script for Nightmare 1 had floated around Hollywood for 3 years. To get it produced at New Line meant signing over the character rights. So, not only did he have no control over what New Line did with Freddy Krueger he also didn’t profit from it. Then Shaye vetoed Craven’s original “it was all a dream” ending for the first movie, and foolishly ignored every single one of his script notes for Nightmare on Elm Street 2.

After that, they kept asking Craven back, but it never went well. They re-wrote 70% of his Dream Warriors script, vetoed his idea about using time travel in the dream world in Elm Street 4 before asking him to re-write their subsequent Dream Master script, an offer he refused. Carven wasn’t particularly pleased and felt cheated, especially since he’d been cut out of profiting off his creation.

New Line CEO Bob Shaye finally got the message and called Craven to try and set things right.  According to Craven, “[Shaye] went back and gave me retroactive cuts of the sequels, and even a little bit of the merchandising.” With their hostilities settled, Craven suddenly liked the idea of getting to direct the seventh Elm Street film in time for the franchise’s 10th anniversary in 1994.

2. The New Nightmare concept was originally pitched for Nightmare on Elm Street 3

3. The idea was inspired by Craven’s inability to follow the plots of the Elm Street sequels as well as a lunch meeting with Heather Langenkamp

Although the basic concept for New Nightmare was first pitched for Elm Street 3, when New Line contracted Craven to return to write and direct he did not immediately suggest re-visiting his original Elm Street 3 idea from ’87. Instead, he watched each of the Elm Street sequels to see where he might possibly take the story but found struggled to pinpoint any consistent through-line in the sequels for an obvious jumping off point.  The stewards of the franchise had left him without any obvious story to tell.

At the same time, Craven had already decided he wanted to bring Heather Langenkamp back even though her character died at the end of Dream Warriors.  So, they did as Hollywood types do and took a lunch meeting, through the course of which she shared some of the genuine horror stories from her own life (more on that below). Craven left the meeting of the opinion that Langenkamp’s real life had been more interesting and dramatic than the Elm Street sequels. This directly led to him pitching the idea that became New Nightmare.

In a post-Curb Your Enthusiasm world, the concept of actors playing fictionalized versions of themselves is fairly common and easy to understand. Back in 1994, the idea was just weird, leaving audiences unsure just how much of the real Heather Langenkamp’s actual life was being reflected in the fictional Heather Langenkamp in New Nightmare.

So, let’s compare: The fictional Heather Langenkamp from New Nightmare is married to a special effects worker, is a mother to a young son, and suffers through her own stalker.

That’s all true of the real Langenkamp, except her stalker was someone upset her TV series Just the Ten of Us had been canceled, and at the time they shot New Nightmare her son David would have been several years younger than her son in the film, Dylan (Miko Hughes).  Plus, obviously, her husband was not killed by Freddy.  As of this writing, the two remain married, and co-run AFX Studio, a full-service Special Make-Up Effects shop located in Panorama City, California.

5. There was nothing stopping them from making Freddy Vs. Jason instead of New Nightmare

There had been multiple efforts to orchestrate a Freddy Vs. Jason film over the years, but no real progress was ever made because Freddy belonged to New Line and Jason to Paramount. After Paramount walked due to Jason Takes Manhattan‘s disappointing box office, original Friday director Sean Cunningham swooped in and worked with New Line’s Head of Production Michael De Luca to obtain the Friday the 13th film rights. Now, finally, there was nothing stopping them from doing Freddy Vs. Jason except for the fact that they had no real idea how to bring the characters together in any kind of logical story. Since when had a lack of good story ideas stopped a Freddy or Jason from happening, though, right?Th

Then Craven came back, and he seemed like the safer bet. Freddy Vs. Jason would have to wait. Craven got to make New Nightmare, leaving Cunningham to produce the standalone Jason Goes to Hell, putting in the famous “Freddy’s glove” ending to tease audiences and possibly force New Line’s hand.

6. The nanny was originally meant to be possessed by Freddy

Tracy Middendorf made her film debut in New Nightmare as Julie, Heather’s very suspicious nanny. The reason she seems so peculiar, though, is because in the original script she was actually Freddy’s pawn, possessed by him to do his bidding. So, all of the stalking and harassing Heather suffers through in the film was supposed to be Freddy’s work through Julie.

They cut it for fear that it somehow diminished Freddy, although they did choose to retain the element where we’re not supposed to completely trust Julie. In fact, Craven’s direction to Middendorf was, “Look guilty. Look like you did it.”

7. The original script actually explained what became of Robert Englund in the film’s second half

The first time I saw New Nightmare I assumed with the way Robert Englund mysteriously disappears at the film’s halfway point that he had either become possessed or killed by Freddy. I’ve since come to learn that was a common reaction among New Nightmare viewers. It just happens to be wrong.

Originally, Englund’s absence was meant to be explained via a dream, at least that’s what Englund says:

“Robert Englund has a nightmare in his house in the Hollywood hills with my paint-stained apron over a chair I fall asleep and wake up in a giant web and a giant red and green Freddy spider comes down and cocoons me in an homage to The Fly.  That was going to be why I disappear.  I wake up from this nightmare in a sweat next to my beautiful wife, and the next thing you know in the film Wes tells Heather that Robert’s gone.  They don’t know where he is.”

This scene was never filmed. They did, however, film (and later) cut a scene in which Robert’s wife informs Heather over the phone they were heading out of town because Robert was kind of freaked out.

8.  Life imitated art when Los Angeles was struck by an earthquake a month after New Nightmare filmed its fictional earthquake sequence

The earthquake sequences in the film were filmed a month prior to the 1994 Northridge earthquake, which killed 57 people, injured 5,000 more, and caused $20 billion in property damage to the Los Angeles area. Though clearly tragic, the earthquake struck two weeks before the end of New Nightmare‘s filming.  So, Craven sent out a second unit to film footage of actual quake-damaged areas of the city, making the earthquake a more significant element of New Nightmare than originally planned.

9. Prior Elm Street stars Tuesday Knight and Jsu Garcia have speechless cameos at the funeral scene

Most everyone at that funeral is someone connected to a prior Elm Street film in some way, but the ones you can most easily recognize are Nick Corri, aka Jsu Garcia, who played Rod in Elm Street 1 and Tuesday Knight, the new Kristen from Elm Street 4.

10. Johnny Depp would have happily done a cameo if they’d simply had the courage to ask 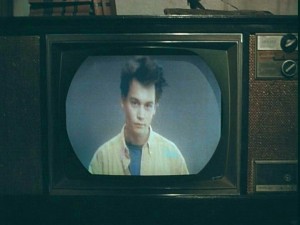 Depp’s cameo would have come during the funeral scene, but Wes Craven never mustered up the courage to ask if the future Jack Sparrow would agree to it.  Afterward, Craven ran into Depp and was crestfallen to learn had he asked at the time Depp would have gladly come back.

The fictional version of Craven in New Nightmare lives in a gorgeous Hollywood mansion, and comes off as slightly off-kilter and a bit creepy.  But did we mention the part about his big mansion?

Originally, Craven was far less kind to himself, writing himself in the original script as being crazed and on the run from Freddy, living in a van driven by Michael Berryman from The Hills Have Eyes. This Craven would have cut off his own eyelids, something he originally tried to include in the Dream Warriors script.

Why would the fictional version of Carven have done that? To better complete his new Elm Street script, which was the only way he could stop Freddy from killing him. Duh. At some point, Craven realized that didn’t sound like it would be particularly fun to shoot or flattering for his public image.  So, big mansion it was.

12. The TV show appearance was inspired by a real encounter

“Robert Englund and I did an appearance together on public television in the San Francisco area.  It was about whether this kind of movie was bad for children or not.  There were parents in the audience and then kids.  All the kids leapt to their feet and started chanting, ‘Freddy! Freddy! Freddy!’ I remember looking at the show host and the parents, and they all looked horrified.”

13. Miko Hughes got to keep that park 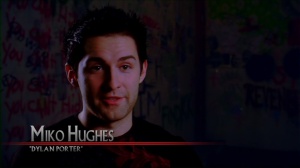 This is when you know you’re leading a charmed life. Just a little kid, Miko Hughes got to play on a park which had been built specifically for him and New Nightmare for the scene when Dylan climbs to the highest point of his jungle gym and tries to offer himself to heaven to see his dead dad. New Line was just going to destroy the set after filming, but as luck would have it Hughes’ parents lived in the desert with plenty of free acreage.  So, New Line let them take the park via flatbed trucks, meaning Hughes grew up with an actual park more or less in his backyard.  Hughes also got to keep Dylan’s stuffed animal Rex, which is cool and all but …park….backyard. You lucky, Miko Hughes.

Next time, we’ll finally (finally!!!) get around to Freddy Vs. Jason. It’s the bastard son of a hundred maniacs vs. ole hockey mask zombie. Winner kills all. Place your bets.