For normal people, signs that you’re getting old include the little things, like having to try that much harder to simply get out of a chair or looking up to wonder where all your hair went.  For TV fanatics, you know you’re getting up there in years when a TV show you grew up on, to the point that you can still recite entire episodes/scenes by heart, receives the crappy “behind-the-scenes, tell-all original film” treatment.  In the past, there was Unauthorized Brady Bunch: The Final Days (2000), which focused on the show’s final season and even depicted a fictionalized version of the legendary “date” between on-screen mother and son Florence Henderson and Barry Williams, which Henderson now says never actually happened.  Well, now, thanks to Lifetime, there’s going to be The Unauthorized Saved by the Bell Story, set to premiere later this year, Monday, Sept. 1, at 9 p.m. ET/PT:

Produced by some of the same people responsible for last year’s new version of Flowers in the Attack, the movie will detail the off-screen lives of the actors while they were making the show, meaning we’ll probably get to see how Gosselaar and Lopez banged their way through the entire female cast.

It all started off so innocently.  Hayley Mills had been a former Disney child star, and in 1988 Disney tried to make her a star again with Good Morning, Miss Bliss in which she played an Indiana middle school teacher (speaking with her normal British accent).  The rest of the cast was split between her co-workers and students.  There was Principle Belding (Dennis Haskins), Miss Paladrino (Joan Ryan), and the African-American janitor Mylo (T.K. Carter) on one side, and Zack (Mark-Paul Gosselaar), Mikey (Max Battimo), Screech (Dustin Diamond), Lisa (Lark Voorhies), and Nikki (Heather Hopper) on the other.  Mills provided voice-over narration as expositional or plot wrap-up devices.  The Disney Channel only gave it 13 episodes before giving up on it.

NBC jumped on it, re-named it Saved by the Bell, switched the setting from Indiana to southern California, and the focus from the adults to the kids.  The only adult character to survive the transition was Principle Belding.  Zack, Screech, and Lisa were kept, but to replace Mikey and Nikki they added A.C. Slater (Mario Lopez) and Jessie Spano (Elizabeth Berkley).  Plus, they added cute (!) cheerleader Kelly (Tiffani Amber-Thiessen).  It essentially became a different show that pretended like Good Morning, Miss Bliss had never happened.  None of the characters ever mentioned Mikey or Nikki or Mylo or even poor Miss Bliss. 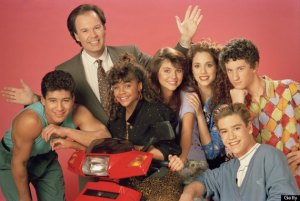 We were so excited, so excited, and then so scared as we watched Saved By the Bell as pre-teens only to discover that actual high school was NOT like the version on the show.  Our schools had way more than just one multipurpose classroom, one square hallway, and a very small locker room.  There was no nearby magician-owned diner we all flocked to, and, oddly, our principal didn’t go out of his way to become a father figure to us.  Moreover, not once did our high school discover oil under the football team’s goalposts, and every time we tried to literally stop time by shouting “time-out” ala Zack Morris we were mostly greeted with some strange looks instead of everyone freezing into place.

Clearly, it was our mistake for ever taking the show seriously, but the dang thing was always on.  By 1993, in was on four freakin’ times a day, one hour block on USA followed up immediately by an hour black on TBS, both strategically airing in the directly after-school-but-before-dinner hours.  Flash forward to today and Saved by the Bell is still on; in fact, it never left.  Ever since its re-runs debuted on TBS in 1992 they have never left the networks’ line-up, currently airing in the early morning hours.  The show was even somewhat recently added to Netflix.

So, now that they are making a movie about what it was like actually making the show what might we expect to see?  That depends.  If their primary source is going to be Dustin Diamond’s autobiography it could be a cornucopia of drugs, sex, spousal abuse, and did I mention the sex part?  Pretty much, over the years there has been plenty of salacious copy about life behind the scenes of Saved by the Bell, but most of it has originated from Diamond’s book or characteristically frank interviews.

Either way, here are some things Lifetime’s Unauthorized Saved by the Bell Story could depict, pulled from Pajiba’s Mindhole Blowers: Mario Lopez Was Accused of Date Rape and 25 Other Facts About “Saved by the Bell” and Its Cast:

Does any of this mean we’ll actually be watching this dang movie come September?  We want to say no, but our Twitter feed will probably give us away the night it premieres.  What about you?  Let us know in the comments.