No one who worked on Arrested Development’s new season – which was split in half, with Part 1 dropping last summer (read my review here) and Part 2 this month – wants to talk about it. The last time the cast got together on the promotional tour, they made Jessica Walters cry and the subsequent apologies didn’t go over so well. “It’s going to be a long while before you see the Bluths again” is what David Cross told one interviewer about whether the newly released Season 5-Part 2 should be considered the show’s swan song.

It feels like time has finally run out for The Bluths. Once every TV critic’s favorite show and then the crown jewel of Netflix’s push into original comedy programming, Arrested Development has now reached a sad end – overshadowed by off-screen controversies (Jeffrey Tambor’s a bit of a monster), constantly let down by disappointing new episodes, and ultimately lapped by the competition.

Arrested Development, for example, will always be the hippest sitcom of 2003-2006, but that was a long damn time ago. People who were college-aged or younger back then, like Donald Glover, are now doing even wilder, more ambitious things with the format. 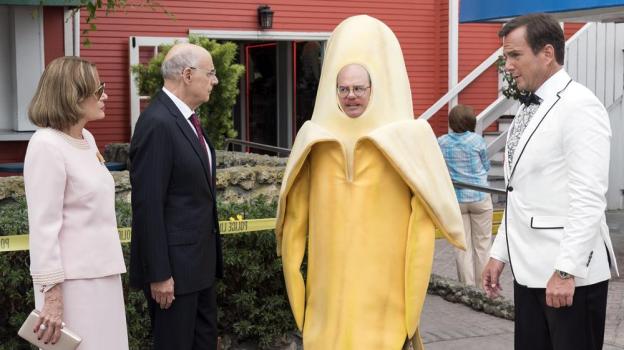 However, for the past 6 years – which is how long it has taken Arrested Development to simply produce 2 full seasons of TV – Mitchell Hurwitz has been chasing that old magic, hoping to rediscover what made the show so great in its prime. The answer is quite simple:

It’s not the vaudeville routines, puns, so-meta-it-feels-like-its-up-its-own-ass qualities, social and political satire, cross-cutting A, B, and C plots, or the sight of Bluth family members doing their own weird version of a chicken dance.

It’s simply these actors- Jason Bateman, Tony Hale, Will Arnett, Alia Shawkat, Portia De Rossi, Michael Cera, Jessica Walters, Jeffrey Tambor, and David Cross – all in a room talking to at each other. For scheduling reasons, sadly, a full reunion has never been completely possible.

6 years ago, Mitchell Hurwitz had to shoot around that, which gave us the divisive, Rashomon-style first Netflix season. In 2017 – which is when they actually filmed the 16 episodes that make up Season 5 Parts 1 & 2 – the entire cast finally reunited but they could only get De Rossi back part time due to her preference to retire from acting. She’s only in a handful of episodes during Part 1 and none during Part 2. So, Lindsay Bluth is nowhere to be found during the best moment of Part 2:

Through overly convoluted means, the entire family is in the old Bluth Company office together for the first time in years. George Michael and Maeby now have their own tech start-up built on complete lies. (Elizabeth Holmes would be proud.) Michael, George Sr., and Lucille are still fighting over secrets and hidden money trails. 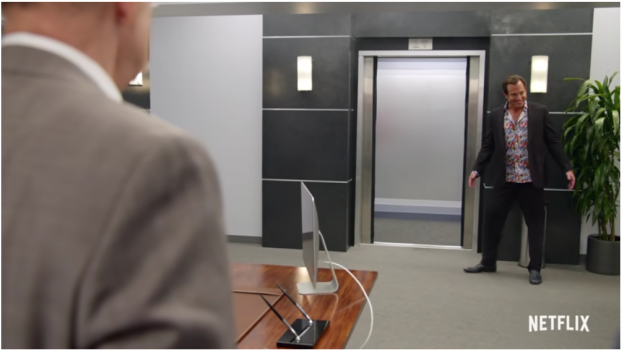 Then, a smoke bomb goes off near the elevator, and GOB emerges on a “did somebody say…” entrance line and announces he is the new President of the company. Buster – who has spent most of the season believing he was on the run from the law when in fact he’d actually been legally released and simply needed to pay a $75 processing fee – soon follows to announce he is out of prison. Buster being Buster, though, he gets his fake hand stuck in the elevator door before he can even finish his entrance line.

The whole family looks on passively, waiting for the two stupidest members among them to stop talking so they can get back to what they were doing.

In the pantheon of all-time best Arrested Development moments, this isn’t even top 10 material. However, it’s entertaining and easily one of the first times the new Netflix version of the show truly feels and looks much like the old 2003-2006 version.

Here they are – the hilariously dysfunctional Bluths, perpetually incapable of uncoupling, no matter how hard they try, and destined to fall back into their old patterns.

The cast is certainly more than happy to give themselves back over to this energy, and for stretches of this season, they flourish. There’s enough here to make it watchable for the show’s hardcore fans. I particularly enjoyed a running gag about a group of successful TV lawyers called “The Guilty Guys” and

But the story just grows too complicated for its own good. Not in a funny “isn’t it cute how over the top we are?” kind of way, either – more “wow, this is just really confusing and hard to follow.” There are multiple episodes which begin with Ron Howard literally spending minutes recapping the intricate plot developments of the prior episode.

Maybe that’s the point. Arrested Development arrived on Netflix and instantly adopted a murder mystery format, with the death of Liza Minnelli’s Lucille Austero being the show’s new story engine. You could say that after two seasons of this storyline, the hard-to-follow twists are simply a part of the satire as if Hurwitz is poking fun at one of the dominant genres of the day.

I’d be more willing to believe that if not for this: one of the show’s old cardinal sins – overly obvious ADR work – has now become its sole-defining characteristic. Outside of an old Godzilla movie, I don’t know that I’ve ever seen so many lines of dialogue fail to match up to what the actors’ mouths.

In the old days, this was a forgivable trait of the show because it was almost always used to substitute a funnier punchline. Here, however, it’s almost exclusively used to impart crucial plot information, giving the impression that Hurwitz and crew massively changed storylines in post and had to bring the actors back to dub new dialogue for that.

Perhaps it’s no surprise, then, that the season ultimately ends in the laziest way possible. Lucille just explains everything at one point. George Michael and Maeby’s sexual tension, not even referenced in years, suddenly reappears in poorly-filmed, very confusing background kiss. GOB, Buster, and Maeby’s own season-long character arcs are barely paid off if at all. Most egregiously, George Michael and Michael ride off into the sunset without even a true final scene together. Maeby looks on and says, “I guess they just wanted to move on.”

It’s the truest and meta thing said all season, and it comes from a professional liar. Feels right for Arrested Development, I guess, but it’s still a sad final note for a show which was once considered to be among the greatest sitcoms of all time.

Hurwitz previously joked they all just want to keep going until they get to 100 and hit that rich, syndication payday. Well, they got up to 84. If the truly need extra cash….