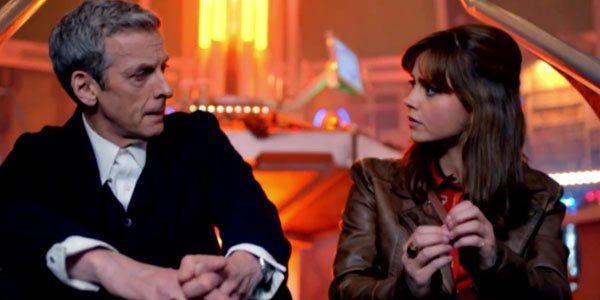 On the event of the 10th anniversary of his pop culture news/commentary site, Pajiba.com, Dustin Rowles shared ten things he’d learned about running a website over the years.  #1 on the list was that “Relentless bitchery can be fun. For a while. Cynicism has its place, but idealism makes work — and life — and lot more rewarding. People also tend to want to be around you more and read your stuff more when you don’t hate everything.”

Oops.  I’ve been writing through WeMinoredInFilm for a year and a half, and it occurs to me that some times I can be a bit of a Debbie Downer.  For example, I simply wouldn’t shut up about the huge financial risk Fox was taking with X-Men: Days of Future Past, and I’ve been far more reluctant than most to drink the Guardians of the Galaxy kool-aid.  Oh, no.  Am I just another geek using the internet to complain about everything?

And then I watched the full trailer for the upcoming season of Doctor Who, the first one with Peter Capaldi in charge of the Tardis:

Dangit.  I didn’t love it.  And I so wanted to turn over a new, far more positive leaf.

Actually, it’s not that I didn’t love it.  Come on – there’s a freaking Tyrannosaurus Rex in there as well as the return of Lady Vastra, with Jenny and Strax likely close behind even though we don’t actually see them in the trailer.  That trailer has so many crazy-looking monsters and scenes that could truly only be accomplished in Doctor Who.   As far as I’m concerned, August 23rd, when the new episodes start airing, can’t get here fast enough.

However, the one thing I didn’t see in there was the Doctor.  Oh, sure, Peter Capaldi is around, saying things like, “I’m the Doctor.  I’ve lived for over 2,000 years.  I’ve made many mistakes.  It’s about time I did something about that,” before somewhat unfortunately putting things a little too on the nose (and Star Trek-y) by answering Clara’s query over where they’re going with a dramatic pause followed by an almost threatening, “Into Darkness.”  But at no point in that trailer, other than maybe the brief shot of him riding a horse while wearing nothing but an old-fashioned sleeping shirt (or male nightgown) do I actually see the Doctor.  Even the PTSD Doctor played by Christopher Eccleston at least flashed that giant smile on occasion and exuberantly exclaimed, “Fantastic!” all to hide the trauma he felt over having just killed all of the Daleks and Time-Lords.

This Capaldi Doctor is different.  This Doctor looks dangerous.  That’s nothing new, really.  I still get chills every time I watch the ending of “Human Nature”/”Family of Blood” and see just how ruthless the David Tennant Doctor was while doling out punishment to those who had crossed him.  However, part of what made that so effective is that it came from a Doctor who was otherwise so immensely lovable, creating a wonderful juxtaposition that the same man who could win your heart simply by flashing his toothy grin:

Also had the ability and willingness to do this:

However, Capaldi may be the first Doctor of the modern era who refuses to put on a “shiny, happy people” veneer to hide his inner-fury, possibly making him the first Doctor to truly earn the title of “The Oncoming Storm.”

Or maybe he’ll have just as many fun, Doctor-y moments as we’ve come to expect, and they’re just hidden in this trailer since the BBC is really going out of its way to hit home just how dark the new Doctor will be.  Who knows.  Unless you’ve caved and read the 5 season 8 scripts which leaked online and/or watched the unfinished, black & white copy of the season premiere which is also out there now we’re only going off of a 1-minute trailer here.  So, it’s foolish to jump to any kind of conclusion.

But change is definitely coming, something which Steven Moffat attempted to prepare us for with Matt Smith’s final speech prior to his re-generation:

“Any moment now he’s a-coming.  The Doctor.  Times change and so must I.  We all change.  When you think about it we’re all different people throughout our lives, and that’s okay.  You’ve got to keep moving so long as you remember all the people that you used to be.  I will not forget one line of this, not one day, I swear, I will always remember when the Doctor was me.”

I will always remember when Matt Smith was the Doctor, but my reaction to Peter Capaldi is not because I’m unwilling to move on from Matt Smith.  It’s simply because when I look at the season 8 trailer I see a guy in a minimalistic suit looking very dour.  I don’t see the Doctor.

Not yet anyway.  As “The Doctor’s Wife” writer and general all-around nerd icon Neil Gaiman put it back before Capaldi had been cast to replace Smith:

I want to be taken by surprise.  I want to squint at a photo of the person online and go “but how can that be The Doctor?”. Then I want to be amazingly, delightedly, completely proven wrong, and, six episodes in, I want to wonder how I could have been so blind. Because this is the Doctor. Of course it is.

There is one Doctor I never could adjust to, though, no matter how hard I squinted: Colin Baker, the Sixth Doctor who’s first lines upon his regeneration were a verbal put-down of the prior Doctor.  And then he attempted to choke his companion, Peri, to death.

Audiences weren’t as forgiving as Peri, and the show’s efforts to make its lead character into an edgier, caustic figure resulted in Colin Baker being fired after just 2 seasons, making him the only Doctor to officially be fired from the show as opposed to pushed out for health reasons (William Hartnell) or simply leaving voluntarily (everyone else).

That’s what makes me nervous because more than anything else I get a Colin Baker vibe from the season 8 trailer even though this Capaldi fella is playing it very differently than the arrogant and abrasive Baker.  It’s more that, as DenOfGeek put it, the trailer comes of like “a more measured take on the Sixth Doctor’s initial, deliberately hard-to-warm-to approach, with Clara being thrown by the sudden shift in dynamics from Flailing Man-Child to Gnomic Glowering Champion.”

We’d been warned to expect this.  Earlier this year, Steven Moffat told Doctor Who Magazine it was high time they changed things up on the show because they’d kind of fallen into a pattern of doing the same thing over and over again.  So, the change was going to start at the top with a new but very old Doctor:

“There would be little point in making as radical a change as we’ve made unless you’re going to go quite different with the Doctor.  The last two Doctors have been brilliant, and have been your ‘good boyfriend’ Doctors. But the Doctor isn’t always like that. There is the sort of Tom Baker, Christopher Eccleston end of the spectrum, where he is mad and dangerous and difficult.  If we’d cast Ben Whishaw, you’d know what we were doing. You’d think, ‘Well, that’s another quirky young man with entertaining hair!’ And he’d be a brilliant Doctor, but Clara would just think, ‘Okay, you’ve rearranged yourself a bit.’  I think it was time for the show to flip around a bit. The new version of the show is quite old now. It’s very old… We need the kick-up-the-arse Doctor, in a way, to frighten you and make you think, oh, it’s a different show again.”

And now the theme of the season is the to ponder the answer to the Doctor’s own question: “Am I a good man?”  There are some logical reasons for why this new Doctor needn’t be any darker, e.g., the support from the Paternoster Gang and Clara, a renewed sense of purpose in trying to find the Time Lords.  Plus, a one-minute trailer is far too little to get this worked up about.  However, it seems abundantly clear that this Doctor will be something we haven’t seen from this show in quite a while.  On the one hand, that’s great, as after 7 seasons it’s arguably past due for a change in direction.  On the other hand, after the first 6 episodes will we be joking about how could we ever have doubted Capaldi because of course he’s the Doctor?  Or will we be wondering who this mean old man is, having none of the “Well, you know William Hartnell’s Doctor was just a mean old man, too” comparisons?

What about you?  Are you struggling to adjust to Ole Man Capaldi?  Or are you more than ready for the change, and loving everything the season 8 promos have been dishing out so far?  Let us know in the comments.