Over the weekend, Scarlett Johansson laid the smack down on The Rock’s candy ass, sending him straight to the heartbreak hotel (Yep, those are a couple of The Rock’s old catch phrases; in a former life, I was a huge WWF fan), scoring an impressive $43.8 million debut for Lucy vs. a not-great sub-$30 million for Hercules.  This is being dubbed by the likes of BoxOfficeMojo as the victory of brains over brawn, which, of course, simply refers to Lucy‘s plot revolving around a woman who gains access to 100% of her brain which turns her into a bit of a super-smart, super-powered bad-ass.  I see what they did there, brains vs. brawn.  However, don’t let that fool you into thinking that Lucy is some high-falutin, brainy thriller.  It’s not.  It’s oh so dumb, only marginally more nuanced than The Rock’s foolish bet that we all wouldn’t laugh at the sight of him wearing a lion’s head atop his giant noggin in Hercules.  Lucy, after all, comes from the same guy (Luc Besson) who gave us Liam Neeson’s particular set of butt-kicking skills in the Taken series.

And that’s totally okay.  It doesn’t so much matter if Lucy is nothing more than a dumb, fun action movie.  It matters that it’s a dumb, fun action movie with Scarlet Johansson in the lead role, and it just made a crap-ton of money, needing a mere 3 days to make back its $40 million budget.  Moreover, this wasn’t a comic book movie.  This wasn’t based on some obscure graphic novel.  This was an original screenplay with Johansson out front and center, showing off how easy it would have been for Marvel Studios to have made a low-budget Black Widow film just like this one.

Lucy‘s opening weekend audience was evenly split between men and women.  That’s going to get a lot of press.  It already has, such as inThe Hollywood Reporter, “As male-fueled tentpoles like Transformers: Age of Extinction have failed to reach the same heights as in previous summers, females have powered some of the summer’s biggest hits — think Maleficent ($230 million domestic) and The Fault in Our Stars ($122 million domestic on a $12 million production budget).”  Basically, men  aren’t turning out to see movies this summer in nearly the same numbers as they have in the past whereas female attendance has remained steady, ergo, Hollywood should start trying a little harder to give female audiences something to care about, right?  Chasing the male dollar has resulted in business being down by as much as 20% year-to-year.

However, you know what the audience split was for Luc Besson’s ultra-masculine Taken 2 two years ago?  Exactly the same as Lucy.  That means Lucy appealed to men and women just as much as Taken 2, one of the bigger (non-comic book) action film in recent history!  There wasn’t necessarily some great surge of women supporting Lucy for tokenism reasons (that sure didn’t happen for Besson’s last action heroine film, Columbiana starring Zoe Saldana) nor was there some great rejection of it from men.  There was simply a movie which was marketed well, keenly playing off our collective familiarity with Johansson’s Black Widow persona from some of the biggest comic book movies of all time.  They debuted in a weekend against relatively soft competition, and it put up the 15th best opening weekend of the year.  Audiences seemed split on whether or not they actually liked it, a C+ CinemaScore grade indicating it could see a big drop-off in the coming weeks.  However, this is still the biggest opening for an action heroine film not based on a video game (Tomb Raider) or young-adult novel (Hunger Games, Divergent).  Well, kind of (and before you adjust for inflation).

What does all of this mean?  Lucy is such a unique example.  It’s from the guy who made the Taken films.  It stars the girl doing a lot of the same kind of stunts we already saw her do on hugely successful comic book movies Iron Man 2, The Avengers, and Captain America: The Winter Soldier.  That’s a lot of solid brand recognition.  Plus, it has a premise which is easy to explain (even if doesn’t actually make hard scientific sense).  It’s a bit of stretch to look at all of that and now assume that a Wonder Woman movie will be an instant hit, or that someone like UFC fighter Ronda Rousey should be getting her own action films instead of the creaky old guard like Kevin Costner in 3 Days to Kill.  However, what it does do is it helps us chip away at Hollywood’s pile of excuses for why certain types of films don’t get made.  We can’t guarantee that Lucy‘s success can be replicated.  However, we can say that Lucy succeeded even though the common wisdom is that no one really wants to see an action heroine film unless, maybe, it stars Angelina Jolie, Sandra Bullock, or (if you go back far enough) Sigourney Weaver. 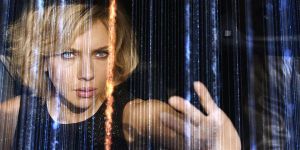 Foreign: Only played in North America. 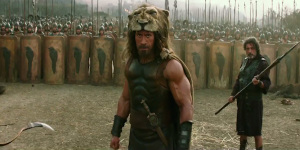 Foreign: $28.7 million from just over 25 territories this weekend, most notably Russia, for a worldwide debut of $58.5 million

Just to be clear, a $30 million opening for a movie that cost $100 million to make isn’t quite good enough (it’s roughly what Ender’s Game did last year just with a bigger budget).  Still, know your role, jabroni, and smell what the Rock is cooking: there’s no way this movie should have even made this much in its first 3 days.  Not after audiences already rejectedThe Legend of Hercules and Pompeii earlier this year.  Not after the trailers made the film looked dreadful.  Not after recent ho-hum biz for Pain & Gain and Snitch showed The Rock is not guaranteed money in the bank.

So, yes, The Rock just got his candy ass kicked by Scarlet Johansson, possibly making retired female wrestlers like Lita and Trish Stratus proud, but he worked damn hard to get that $30 million for his movie, endlessly promoting Hercules through traditional media and through his massive social media following.  Plus, it managed to make almost as much overseas despite not playing in any of the really big markets other than Russia.  It’s a not-good-enough start at home, but a very impressive start everywhere else.

3. Dawn of the Planet of the Apes 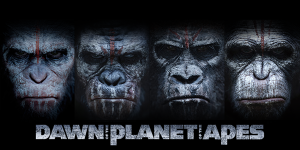 Foreign: $54.5 million from 60 territories this weekend for a total international haul of $181.9 million and worldwide total of $354.3 million

Dawn is now only around $4 million away from crossing Rise of the Planet of the Apes‘ entire North American total ($176 million), though it still has a bit more to go to catch up worldwide ($481 million). 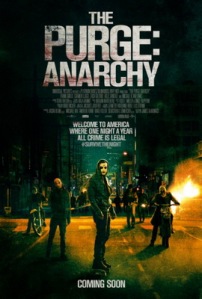 Foreign: $6 million from over 20 territories this weekend for a total international haul of $6.7 million and worldwide total of $58 million

Foreign: $6.9 million from 30 territories this weekend for a total international haul of $21 million and worldwide total of $56.1 million

The first Planes was simply supposed to be a direct-to-video Cars spin-off, but putting it into theaters proved to be a shrewd move, grossing $90 million domestic/$219 million worldwide against a modest $50 million budget.  The problem is no one actually seemed to like Planes, and there wasn’t a whole lot of demand for a sequel just one year later.  The result is Planes: Fire & Rescue failing to launch.  Wait.  I can do better than that.  It looks like this is one movie that needs its own fire…and rescue unit.  I take it back.  I couldn’t do better.

Foreign: $6.1 million from nearly 20 territories this weekend for a total international haul of $10.2 million and worldwide total of $37.1 million

Foreign: $37.5 million from nearly 60 territories this weekend for a new international/worldwide split of $730/$966.4 million.

This is going to be the first summer in nearly a decade in which no single movie managed to gross $300 million at the domestic market.  Our last real hope to do so, Transformers: Age of Extinction, has been the franchise’s worst performer to date, at least domestically.

As a point of comparison, Age of Extinction has now crossed $300 million in China.

That makes us look bad, doesn’t it?  China has exactly one more $300 million-grossing film this summer than we do.  Yeah, yeah, yeah, China’s taking over everything, but Age of Extinction is the first film to ever gross $300 million in China.  North America’s had 47 films do that.  Take that China.

8. And So It Goes (Opening Weekend)

This is already a higher gross than what director Rob Reiner’s last two movies (The Magic of Belle Isle, Flipped) made combined (less than $2 million) from their entire run.  He remains the guy who directed classics like Princess Bride, Misery, When Harry Met Sally but now struggles to get his films into theaters.  The poor reviews for his recent efforts surely don’t help, but it’s mostly that he continues making the movies he’s always made while Hollywood isn’t so much interested to be in that kind of business anymore.

Foreign: Currently, it has an international gross of $6.1 million from limited release for a worldwide total of $84.3 million.

10. A Most Wanted Man (Opening Weekend)

This is the best opening weekend in distributor Roadside Attractions history.  Technically, The Conspirator made more ($3.5 million), but it opened on nearly 350 more screens than A Most Wanted Man (707 vs. 361).  The closest comparison, then, is to Mud, which opened on practically the exact same number of screens as Most Wanted and posted a $2.2 million debut.  It went on to earn $21.5 million domestically whereas The Conspirator topped out at $11.5 million, still the two biggest hits in Roadside’s history.  Will A Most Wanted Man follow in their tracks, or is this debut merely a reflection of fans rushing out to see one of Philip Seymour Hoffman’s final movies?

Guardians of the Galaxy and Get On Up both open wide.