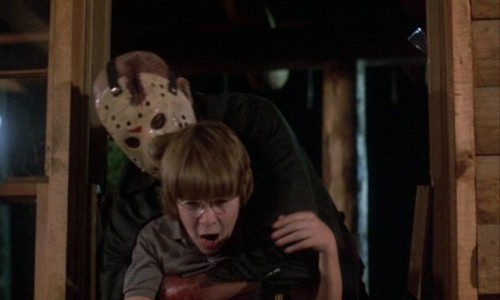 I am taking part in Forgotten Films’ 1984-A-Thon wherein a collection of blogs have all organized to take turns posting reviews of some of the biggest as well as most obscure films of ’84.  We have arrived at the final day of the marathon, and I am here to provide my take on Friday the 13th: The Final Chapter (1984), aka the “good” one with Corey Feldman and Crispin Glover.

I’ve covered The Final Chapter elsewhere on the site in a breakdown of 13 trivia items about the making of the movie.  However, I’ve never actually shared whether or not I think the movie is any good, and that’s because before this morning I hadn’t actually seen The Final Chapter in as long as I can remember. As I watched it for the price of a couple of bucks on Vudu I couldn’t escape the following question: Is it possible to take a Friday the 13th movie seriously?

Of course not, but why would you even want to? Come on, they called the 4th film in the franchise The Final Chapter, and it has now been followed by 6 sequels, a team-up with Freddy Krueger, and a quasi re-boot, with yet another installment planned for 2015! In the time since they “officially” killed off Jason back in ’84, he’s become a straight-up zombie, traveled into space where he was turned into a cyborg, and the last time we saw him (in the 2009 reboot) he appeared to be a marijuana farmer.

These movies are rather naked exercises in film commerce.  We know it, and the people who made them know it.  In fact, the only people who ever probably took these movies seriously were Siskel & Ebert, the latter of whom began his At the Movies review of The Final Chapter with the following summation:

“An immoral and reprehensible piece of trash which sold more tickets in its opening weekend than any other film of 1984 so far, and that is a very, very depressing commentary.  It makes me sad to think of all those moviegoers paying four and half, five bucks, most of them teenage kids, sitting there watching this sad, cynical, depressing movie […] It’s just 90 minutes of teenagers being strangled, stabbed, impaled, chopped up, and mutilated.  That’s all this movie is.  It’s just mindless, bloody violence.  The people who made this movie ought to be ashamed of themselves”

Wait, wait, wait…tickets back in 1984 cost five bucks? That actually seems kind of high for that long ago.

[Actually, according to BoxOfficeMojo the actual average ticket price back then was $3.36 compared to today’s average of $8.15. I just had to get that out of the way first.]

Roger Ebert’s outrage was clearly rather hilariously overstated, but his actual estimation of Final Chapter and, indeed, pretty much all of the Friday the 13th films wasn’t wrong. There is simply not much to these things.  At least the first one had the mystery as to who was actually doing the killings. Past that, as original Friday the 13th director/producer Sean S. Cunningham put it in Crystal Lake Memories, “The notion of having a surprise as to who it is or what it is changed completely [when Jason became the killer].  So, what the stories became was sort of a ritualized telling of a group of young people who go someplace they shouldn’t go.  You change the characters a little bit, but it stayed inside a very deliberate form.”

Cunningham’s not really far off there. In fact, the Friday the 13th and slasher films became so formulaic that Joss Whedon and Drew Goddard’s re-affirmation parody Cabin in the Woods (2012) (spoiler alert) suggested an in-universe explanation wherein the classic slasher scenarios were actually all part of an elaborate blood sacrifice ritual meant to appease ancient gods (end spoiler).

Those gods would most definitely have been appeased by The Final Chapter, which features 13 kills, 14 if you count the actual “death” of Jason at the end. In fact, most of the time when I look around for reviews of the old Friday the 13th films I mostly find lists breaking down all of the best kills because, as Ebert observed, that’s all the movies really have to offer.  The difference is that not everyone sees that as a bad thing.

Of course, The Final Chapter does actually try to be more. The basic plot is half-vintage Friday the 13th – a group of horny teenagers stay at a cabin in the woods for a weekend of debauchery and death – and half-new wrinkle – the teenagers’ cabin is actually across the street from a family of three, a single mom (Joan Freeman) and her teenaged daughter (Kimberly Beck) and young son (Corey Feldman). Plus, a noble older brother (Erich Anderson) of one the prior film’s victims’ is kind of lurking around in the woods, epically failing in his quest to protect the teenagers and kill Jason once and for all.

Oh, yeah, there are also former Doublemint Gum commerical twins around to be nude and, shortly thereafter, dead.

Many of those involved with the making of the film claim they set out to make the best Friday the 13th ever, especially since they genuinely thought it was to be the last.  It was director/screenwriter Joseph Zito and uncredited co-writer Barney Cohen’s stated goal to give us characters who we will actually be sad to see go.

To that end, they do succeed in that other than the sleazy orderly at the beginning of the film none of the characters are so annoying you end up rooting for Jason to get to them even quicker. In fact, Crispin Glover and Lawrence Monoson’s Beavis & Butthead-like duo who just want to get laid are genuinely funny together.  The characters in these films rarely ever had any actual story arc, and Glover’s is pretty straightforward-coming off a break-up, he’s afraid that he’s a “dead fuck,” and once he finds a girl who sleeps with him and claims he was great in bed his arc is complete. Time to die.

This is the time in the review when I post the obligatory clip of Crispin Glover’s awesomely awkward dance scene from the film. If you’ve never seen it, well here it is and you’re welcome:

The main dramatic thrust is supposed to come from the Jarvis family, with the mother and Tommy meant to somewhat mirror Jason Voorhees and his mom.  Back in ’84, actually having a little kid around in one of these movies was a big, new wrinkle on the quickly tiring slasher formula. However, for as much as the film is remembered for Feldman’s presence it’s actually a bit surprising to watch it now and realize how little he’s actually in it until the final act.  There’s only so much screen time to go around when you’ve got to kill someone new once every 10 minutes.

Feldman’s Tommy Jarvis was meant to be an homage to legendary effects guy Tom Savini, and the way he tricks Jason at the end is sort of reminiscent of the way Jason is tricked by Ginny at the end of Part 2: if you make yourself look like Jason or his mom, he will rather stupidly stop what he’s doing and welcome you into the family.

On the technical side, Director Joseph Zito does an effective job of building the film as such that you don’t really see a whole lot of Jason until the final act, but this attempt at tension is undercut by some rather poor lighting at rather inopportune moments. He keeps the jump scares to a minimum, and his effects crew provides some appropriately gruesome kills (even if some of them no longer look very convincing).

Just get to the kills already.

I was actually surprised by the relative restraint shown with the kills in the film, although a lot of that is due to MPAA-forced editing. Almost none of the kills last as long as you’d expect, and in one case there’s actually a rather clever timed lightning strike used to depict the kill as a shadow on the wall of a house.

In a post-Scream/Cabin in the Woods world, I don’t completely know how to evaluate a slasher film anymore.  The genres tricks have all been exposed to the point that they are now better suited to be in service to a horror comedy like Tucker & Dale vs. Evil or the upcoming Final Girls.  There is no level of self-awareness in The Final Chapter, nor would you expect there to have been back in ’84.  It is instead a straightforward Friday the 13th film which has been celebrated as among the franchise’s best over the years because it did something as basic as having vaguely likable characters and threw a kid in there to change things up. By franchise standards, it probably is among the best, but that’s a fairly low bar.

My personal favorite remains the more enjoyable, oddly funny but also uber-violent Jason Lives. As a bit of nostalgia, though, Final Chapter does still bring an odd sense of joy, a reminder of a time when Jason Voorhees was truly thought of as being scary.  Ki-ki-ki, ma-ma-ma