Last night, Fox’s Batman prequel series Gotham introduced its version of The Scarecrow, the latest in the show’s long line of well-known comic book villains. We know the character as Dr. Jonathan Crane, a deranged psychologist who uses a fear toxin to exploit and incapacitate his enemies. Gotham walked it back and gave us Jonathan’s dad, Dr. Gerald Crane, who similarly preys on the phobias of his victims just without the aid of any kind of psychotropic agent. Jonathan was around, but mostly just as Gerald’s kid who doesn’t stay in the van as ordered because the parking meter ran out.

To recap, this means that in its short life Gotham has already presented us with some of the biggest Batman villains of all time (Scarecrow, Penguin, Two-Face, Riddler, Poison Ivy, and Catwoman) along with somewhat lesser-known baddies like The Electrocutioner, Victor Zsasz, and even Balloonman, just to name a few. The Dollmaker is due to show up in just a couple of episodes, and now executive producer Bruno Heller is telling TVGuide that because “nobody can wait” in America the first season will even “scratch the surface” of the Joker story.

I’m a Batman fanatic. As I write this very article, I’m looking up at a framed picture I have of Frederick Jay’s “Starry Knight,” which inserts Batman into Van Gogh’s classic “Starry Night.” Everything I just said about Gotham should be like catnip to me (insert a Catwoman pun here, if you’re so inclined). They’re already over half way there to incorporating some version of every one of Batman’s cinematic villains. The only ones left are Joker, Dr. Freeze, Bane, and Ra’s al Guhl! This comes after years and years of all these characters being saved for the big screen and repeatedly held off of Smallville so as not to diminish their value. Now, Ra’s al Guhl is running around Arrow, and just about every villain you could imagine seems set to show up on Gotham at some point. As the Burt Ward Robin might say, “Holy fan overload, Batman!”

So, why did I just cancel my DVR series subscription to Gotham last night with no real plans to simply catch the show down the line on Hulu or On Demand? The answer is obvious: I don’t really like Gotham. However, what really inspired my decision is that when I recently fell behind the show by a couple of episodes I discovered how much more fun it was reading recaps and reviews written by increasingly disgruntled fans than actually watching the episodes they were tearing apart. Hush Comics, in particular, has been a real delight, recently deciding that one of the only pros of the episode “What the Little Bird Told Him” was the presence of, “Morena Baccarin is a beautiful woman. Why is this a plus? Because pretty much everything else about this episode sucked. Also, she can act better than the rest of the cast. And now that she and Jim Gordon have hooked up, it looks like she is here to stay… for a while at least.”

Really, once you’ve seen two or three episodes of Gotham you can stop watching and read someone else’s take on the show and quickly conclude, “That’s so something that show would do.” As the AV Club argued in its review of last night’s Scarecrow episode, “This episode feels no different than any other. When every episode follows exactly the same beats, how are we, the audience, supposed to differentiate between what’s significant and what’s just for fun?”

This comes after Gotham made a clear attempt at a reboot in its mid-season premiere. After having stepped on too many toes, Jim Gordon (Ben McKenzie) was forced out of the Gotham City Police Department and into working security in the undermanned and newly re-opened Arkham Asylum. His tumultuous partnership with Harvey Bullock (Donal Logue) had suddenly turned chummy, Bullock presented as a lovable ally longing to be re-ignited with his partner. Gordon’s sexually confused fembot of a fiancé, Barbara (Erin Richards), was mostly sidelined in favor of a cute Arkham physician played by Baccarin, a fan favorite of genre shows from her time on Firefly/Serenity. Bruce Wayne and Alfred were gone, off to Europe for a bit. What any of that had to do with the escalating mob war involving The Penguin (Robin Lord Taylor), Fish Mooney (Jada Pinkett Smith), Butch (Drew Powell), Carmine Falcone (John Doman), and Sal (David Zayas) was less clear, but, still, Jim Gordon, the man who will be Police Commissioner, stuck working in Arkham at least seemed like something new. 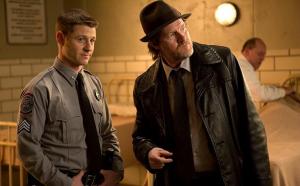 So, of course, he was back on the police force just a couple of episodes later. Just when Gotham finally did something I found interesting it reverted back to its default setting, another example of the show being too impatient to be interesting.

I’ve had people tell me that they love the way Gotham seems like 75 years worth of Batman history all colliding at once in the body of a single show, with the campiness of Dick Sprang in the comics, Adam West on TV, and Joel Schumacher on film competing against not just the grittiness of Ed Brubaker and Greg Rucka’s Gotham Central in the comics and Christopher Nolan on film but also the visual flair of Tim Burton’s Batman.  I’ve also heard from some who don’t take Gotham too seriously and simply enjoy how strange it is.

That last part is what kept me going with the show for a while. For example, I had a good laugh when the show’s version of Harvey Dent erupted in fiery anger in practically just his second scene. Then I convinced myself that I really liked Robin Lord Taylor’s performance as an especially weaselly Penguin. Then I convinced myself that Jada Pinkett Smith’s Fish Mooney was pure camp fun. Then I convinced myself that sticking Gordon into Arkham would peak my interest again. And then I stopped watching for a couple of episodes and realized I didn’t miss a single one of the characters nor did I absolutely have to see what happened with such and such storyline. At the very least with something like Arrow, even when I dislike pretty much all of their storylines I still keep coming back because I actually like the characters.  Right now, my favorite character on Gotham is Fish Mooney’s right-hand man who stuck with her even when a double cross was there for the taking.  That’s it. What, then, is there really drawing me back beyond blind loyalty to all things Batman?

Comparative Geeks recently made a compelling argument that Gotham is mirroring iconic Batman graphic novels Year One and The Long Halloween by gradually transitioning the city from a place ruled by the mob to somewhere overrun by supervillains, positing this as a universe in which Batman will eventually rise to defeat the costumed maniacs instead of the more traditional model of the maniacs rising in response to him. That seems like exactly the kind of thing that happens to a show which tries to do Batman without Batman but can’t resist entertaining “us with the signature traits of its icons now.” As the AV Club argued:

The origin story, by nature, is character-driven. It takes what we already know about a character and gives us insight into how they got that way. Gotham’s idea of an origin story is just giving us younger versions of characters we know. That’s it. It’s the worst kind of reductive nostalgia, which assumes that all Batman fans, or even casual superhero fans, want to see is winking nods to future characters.

Prior to Gotham’s debut, I made an informal bet with a friend as to who would stick with the show the longest.  I won; she quit halfway through the second episode. The reason we made the bet in the first place was because we were both so down on Gotham, sight unseen, conceptually.  It’s The Wire/The Shield but with James Gordon and the Gotham City PD.  Wait – it’s Smallville but with Bruce Wayne. No, it’s both!

We wondered what their long-term plan was for integrating Bruce Wayne into the story so that every time we cut back to him from whatever Gordon is up to doesn’t feel wholly unnecessary.  We worried we were heading for a TV show version of X-Men: First Class, which began as two separate projects (X-Men prequel, Magneto prequel) which merged into one.  That worked far better than it had any right to there, and Gotham was unlikely to pull it off as well.

I’m not sticking around to see if they work all of that out. If the show quite improbably gets really, really good, by all means let me know – I can catch in on Hulu. But it’s not going to take up room on my DVR anymore.

What about you? Are you still watching Gotham? Do you see just enough in there to keep you coming back? Or do you totally love the show, and don’t know why I would be walking away from it? Let me know in the comments.

This is how I imagine Fox reacting to news that I’ve decided to stop watching their show:

The Failings of Gotham | EW.com