RottenTomatoes describes Paul Thomas Anderson’s 2012 film The Master as “smart and solidly engrossing,” the type of challenging film tailor-made “for serious audiences.” I would describe it as 2 plus hours of Joaquin Phoenix looking remarkably intense and routinely beating people up, his fits of violence being either brilliantly jarring or drinking game-funny (Phoenix hit someone again? Do a shot!). Anderson ultimately tries to make some kind of point about cults and gets Oscar caliber performances from all involved, particularly Philip Seymour Hoffman.

Back in 2012, the only way to describe The Master was as “that Scientology movie,” a phrase used in seemingly every single major review of the film at the time. Anderson, forever adored after his audacious plotting and Steadicam shots in Boogie Nights, hadn’t put out a new movie since the Oscar winning There Will Be Blood in 2007.  When he first announced The Master in 2009, it was pitched as a “period drama starring Philip Seymour Hoffman as a founder of a new religious organization in the 1950s” with Hoffman’s character said to be “a charismatic intellectual who hatches a faith-based organization that begins to catch on in America in 1952.” So, basically he’s L. Ron Hubbard, and the “faith-based organization” is Scientology, an obvious conclusion aided by Hoffman’s considerable physical resemblance to Hubbard.  Naturally, eyebrows were raised when Universal Studios suddenly dropped The Master during the development stage, sparking rumors that the notoriously litigious Church of Scientology was again willing something out of existence to protect its image.

Universal walking away was business as usual, but it was weird that no one else was stepping up to offer a lifeline, especially for a director coming off of There Will Be Blood, although Anderson claimed the time off was beneficial because it gave him months to perfect the script. However, Scientology really did have nothing to do with it (we think). It was actually just a side effect of the way the independent film industry was imploding, The Weinstein Bros. leaving Miramax, almost all of the studios shuddering their indie art-house divisions, and Anderson’s normal distributor, New Line, being folded into Warner Bros. It eventually took Megan Ellison, the daughter of a tech billionaire who’d become a producer after dropping out of film school, to come along and give Anderson the money he needed.

Once The Master finally arrived, it failed to quite be “that Scientology movie” so many wanted, Anderson proving either unwilling or uninterested in any kind of expose or condemnation of Hubbard and his early followers. Yes, Hoffman’s Lancaster Dodd is just a Hubbard clone, from his frequent run-ins with authorities to his popular, influential religion-starting book “The Cause” (standing in for Dianetics) to his “processing” (standing in for auditing) sessions to his rhetoric about past lives and ridding the body of ancient demons. In fact, the most effective sequence in the whole film, Hoffman’s Dodd breaking Phoenix’s Freddie down by forcing him to answer the same set of questions over and over again until reaching a cathartic truth, is actually just Anderson’s version of a Scientology auditing session minus the reliance on an E-meter. 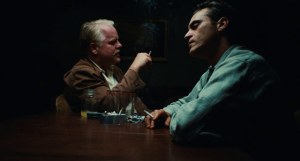 The Master really isn’t a movie about Scientology, though. If you want that, turn to Alex Gibney’s Going Clear: Scientology and the Prison of Belief, which just became HBO’s most-watched doc since Spike Lee’s When the Levee Broke in 2006. It’s actually a recent viewing of Going Clear that inspired me to revisit The Master on Netflix, and as The Village Voice put it:

“The Master is ultimately ‘about’ Scientology in much the same way Boogie Nights is about the San Fernando Valley adult-film industry of the 1970s or There Will Be Blood is about the California oil boom of the early 20th century. That is, it functions as a secondary concern, more setting than actual subject, more subtext than text. It is a way for Anderson to bring together an assortment of his typically idiosyncratic, iconoclastic characters and a conduit to larger themes of power and paranoia, domination and submission, free will and predestination.”

It’s actually a full 20 minutes before Dodd even shows up on screen. We spend that time following Freddy’s post-war job as a department store photographer and life as a skirt-chasing alcoholic, getting into fights due to his short temper and potentially causing someone’s death through the moonshine he shills. Only then does he end up stowed away on a San Francisco yacht being used by Lawrence Dodd, referred to as Master by all of his followers and genuinely intrigued by the potential challenge of attempting to convert Freddy to his cause. Forever surrounded by sycophants, his true believer wife, and quietly doubting adult son, Dodd senses that Freddy could represent his greatest accomplishment, taming the most beastly man imaginable. Freddy is, after all, the type of guy who later passes a note to one of Dodd’s female followers which simply reads, “Want to fuck?” instead of dutifully dictating Dodd’s audio recordings as he is supposed to and everyone else already is.

Thus essentially plays out 2 hours of whether or not Dodd can truly ever break Freddy, who so desperately wants to belong to something but can’t completely understand the point of certain exercises, like walking back and forth between a wall and a window ceil while blindfolded and describing what he feels. Dodd’s family members, including the stern wife played by Adams, ultimately air their grievances, which amount to their disbelief that Freddy is actually a true believer despite his violent outburst against anyone who doubts Dodd in front of him. Still, the homoerotic game between Dodd and Freddy plays on, with the homoeroticism inserted mostly as Anderson’s attempt to feel like he wasn’t simply re-hasing the self-appointed prophet and protégé motif of There Will Be Blood. As Roger Ebert argued, “Why are these two opposites so strongly attracted? You could guess homoeroticism, but there too the movie is vague. […] The Master is fabulously well-acted and crafted, but when I reach for it, my hand closes on air. It has rich material and isn’t clear what it thinks about it. It has two performances of Oscar caliber, but do they connect?”

In general, that’s the problem I have with most of Paul Thomas Anderson’s films. I struggle to connect with his work on an emotional level. In fact, although I adore Boogie Nights I don’t know how much of that is due to me being wowed by all the Steadicam shots, ingenious editing and soundtrack, quotable lines, and astute analysis of the cultural shift from the 1970s to the 1980s, and how much of it is because I actually care about any of the characters. The moment Dirk Diggler achieves his epiphany in Boogie Nights while Alfred Molina’s coked-out drug lord stammers on about pop music, the camera holding the shot as a mysterious smile creeps across Mark Wahlberg’s face, still wowed me. When the same trick is repeated to highlight Freddy’s epiphany in The Master, his “Holy shit, what if Lawrence Dodd is a total fraud?” moment, I felt slightly confused, struggling to read Phoenix’s intense face, at least noting that he progressed from what I’d call “creepy smile 1” to “creepy smile 2.”

That moment, on the other hand, is breathtaking to behold. The Master was the first movie filmed in the large-frame 70mm since Kenneth Branagh’s Hamlet in 1996, affording it clear, vivid imagery. It really shows, particularly jumping out anytime Freddy is glimpsed lazing on a boat during his Navy days. It helps to accentuate a final act sequence involving a single motorcycle storming across a flat desert area. However, by the end Dodd and Freddy’s parting interaction is emotionally charged, punctuated by gorgeous close-ups of Joaquin Phoenix’s crying face, and I felt absolutely nothing, left completely unaffected by an impressive, but cold film. Maybe I simply wanted too much Scientology from The Master, and maybe Anderson’s dramatic leanings are incompatible with my personal preferences, especially now that in his older age he has scaled back on all the camera and editing tricks from his earlier work.

Anderson told The Village Voice that one of his crucial research resources for the movie was a Scientology-themed newsletter published from 1954 to 1965 by a married couple who were among Hubbard’s early adopters, “It really was the best possible way to time-travel, reading these newsletters and to kind of get a sense of not just Hubbard, but the people who were really interested in the beginnings of this movement, because they were very, very hungry to treat themselves and get better, and they were open to anything. They were so incredibly optimistic.”

It’s probably no coincidence that I found The Master to be at its most engaging when we were witnessing Dodd deliver speeches to his followers or displaying his “processing” session for volunteers in front of gathered crowds, impatiently shooting down any suggestions that he was merely using hypnosis on the volunteers. At one point, Dodd’s adult son flippantly mentions that his father is simply making all of it up as he goes along, suggesting a crack in the religious foundation, but that goes mostly unexplored outside of a later scene in which a follower points out how Dodd’s newest book oddly contradicts his prior book.  I wanted to see more of that and gain more of an understanding about who Dodd’s followers were and why they believed him.

My mistake was watching The Master after Going Clear and expecting even more insight into why the earlier followers of a faith like Scientology would in fact have such a hunger to believe anything. Instead, I felt much like Freddy, a fly on the wall, scratching, only occasionally feeling at home, ultimately failing to ever truly get in, looking at The Master’s legion of adoring film buff fans on RottenTomatoes and throwing my hands in the air as if to say, “I just don’t get it” or I think I do, but I don’t really feel anything about it.  Even so, it was possibly all worth it just to see Phoenix and Hoffman’s “processing” scene, which must certainly have a place on Anderson’s career highlight reel.

As of this writing, The Master is available to stream on Netflix.