I thought an episode called “Who Is Harrison Wells?” and featuring Joe and Cisco discovering the real Harrison Wells’ long-since buried corpse with the assistance of Arrow’s Captain Lance would be really dark. This was going to be the episode in which Caitlin’s entire world was shattered when she realized Barry was completely right about Dr. Wells. Plus, decayed corpses just don’t show up on The Flash that often. That’s going to make for a heavier-than-usual episode, right?

Wrong. “Who Is Harrison Wells?” was full of The Flash’s characteristic heart, humor and geek out moments, such as Cisco sharing the screen with Katie Cassidy’s Laurel Lance or Barry opening the episode racing through apparently nearby Coast City (aka, Hal “Green Lantern” Jordan’s home). There was a shape-shifting villain of the week, known as The Everyman, who got out of tight spots by pretending to be a sweet little old lady in one scene and an innocent little girl in another. And thanks to that shape-shifter Rick Cosnett (who plays Eddie), Grant Gustin and Danielle Panabaker all got to follow in the footsteps of many genre TV show actors before them and have a lot of fun playing someone merely pretending to be their character. Now, we have an explanation for the more confusing parts of the recent spoiler-heavy trailers the CW had released for The Flash’s final episodes. Barry kissed Caitlin because in that specific moment he wasn’t actually Barry, and the same goes for Eddie shooting down two cops in cold blood.

It all started off over pizza, though, Barry, Joe, Cisco, Eddie and Caitlin having a pizza party as well as a “How do we destroy Dr. Wells?” party at Joe’s house. Of course, Caitlin wasn’t so much in the mood to take down her mentor, understandably needing more evidence than Barry’s big wall of crazy and someone claiming that after Tess Morgan died Dr. Wells seemed like a completely different person (and not just in the “We all change after a tragedy” kind of way). So, we left the opening scene with the dual storylines of Barry pledging to keep an eye on Caitlin while going about things as usual at STAR Labs while Joe and Cisco head to Starling City to investigate the old Harrison Wells/Tess Morgan car accident. 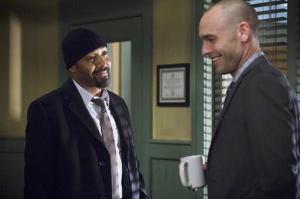 That resulted in half of a somewhat normal, table-setting Flash episode and half of an ever so slightly forced Arrow crossover. If you watch both Flash and Arrow then you’re fully aware of their on-going storylines. If so, it was a tad weird to see Felicity and Ray show up happy as ever on The Flash last week even though the most recent Arrow episode before that moment featured Ray saying “I love you” and Felicity almost literally running out of the room in response. Similarly, it’s a tad weird to see Laurel working her day job in “Who Is Harrison Wells?” when the most recent Arrow episode featured one character leaving the show and another suffering a mortal wound from a sword. Also, Captain Lance seems pretty together for a man whose recent attempts to prove that Oliver Queen is the Arrow has resulted in a warning that he is stretching the law too far and could lose everything as a result.

I’m choosing to think of it in the way that Joss Whedon has described writing for The Avengers which is that whatever they have going on in their solo movies ultimately has to be mildly referenced but ultimately unresolved and left to be addressed when they’re back where they belong. So, while Captain Lance helps Joe and Cisco uncover the real Harrison Wells’ body (thanks to another nifty Cisco gadget) we get an interesting conversation in which Lance explains, in broad strikes, why he’s angry at his daughter. Joe argues for her viewpoint, suddenly realizing Iris may resent him for lying to her about The Flash the same way Captain Lance resents Laurel for the lie she told him. It does seem fitting that it would be a person from The Flash universe to tell Captain Lance to forgive his daughter, especially when that person is Joe, The Flash’s own version of Captain Lance.

It also seems fitting that Cisco would be the one to make a new sonic scream device for the Black Canary (did we ever find out where Sara got her original sonic device last season on Arrow?), and that he would be the one to dub it the “Canary Cry.” However, for as nice as it was to see Katie Cassidy getting to stretch out and just have fun playing with some lighter material (well, she does half-seriously threaten to kill Cisco at one point) this is probably the element of this episode which did little to actually service the episode. Having Cisco create a special device for a character from another show in exchange for a candid picture with her in her vigilante outfit was like an extended easter egg, a complete delight for the fans that still must have done very little for anyone who doesn’t watch Arrow. Of course, I am someone who watches both Arrow and The Flash, and I’ve read enough Birds of Prey comics to understand the significance of the “Canary Cry.” So, I was smiling, and now apparently the internet is shipping for Laurel and Cisco (Lisco? Caurel?) and someone somewhere has probably already responded to that with an essay arguing that Laurel and Cisco should stay friends.

All of that was really mere window dressing for what was most likely our last relatively normal Flash episode of the season. We saw the villain of the week commit a crime. This time, a female bank employee was caught on camera robbing the bank even though upon cross-examination she swears the woman on the security cam footage is not her. Eddie realizes they’re dealing with a metahuman and kicks the case over Barry and the STAR Labs team. Dr. Wells and Caitlin provide the standard science jargon explaining how a shape-shifter might operate on a cellular level, and Barry rushes to action with their guiding words in his ear. Barry underestimates the opponent at first, the STAR Labs crew work together on a solution, and Barry mixes his cop-life and Flash-life to track down the bad guy. As per usual, everyone lies to Iris about everything, even Caitlin.

This all felt like the relative calm before the storm, giving us the broad comedy of someone who wasn’t really Barry using pronouns “Oh, it’s…her” and speaking in generalities since he doesn’t actually know Iris or Caitlin’s names, or Caitlin exclaiming, “I knew it!” upon learning that the version of Barry who kissed her wasn’t really Barry. Yes, Caitlin clearly kissed back, but file that away for later, a tease for the SnowBarry shippers and excuse for Danielle Panabaker to flex some comedy muscles, such as her obvious awkwardness when Iris arrived immediately after that kiss.

Of course, The Flash isn’t simply light-hearted humor all the time. This was also the episode in which Eddie was briefly framed for a potential double homicide. He demanded to be put back into his holding cell after Barry freed him, nobly arguing that he trusted Barry to be able to clear his name the honest way, playing the “This is not the way your dad would have wanted it” card. That was a surprisingly touching moment, reminding us that Eddie and Barry are genuinely friends at this point.

However, for as impatient as I was last week for The Flash to finally get around to everyone knowing Dr. Wells’ secret I realized by the end of “Who Is Harrison Wells?” that I am going to miss what this show was. Grant Gustin and Tom Cavanagh work so well together as the pupil and mentor, and by this point in the season they have really worked out a consistent rhythm for all of the STAR Labs scenes and back-and-forth between The Flash in the field and Dr. Wells, Caitlin, and Cisco in his ear from their STAR Labs microphones. “Who Is Harrison Wells?” feels like the last time we will get that, especially with the way it cliffhanged on Barry and pals discovering Dr. Wells’ secret future room with the yellow suit, tachyon device, and future newspaper. It’s hard to imagine things going back to normal, and it’s concerning to ponder what they will do if Tom Cavanagh is not a regular cast member next season, based on how all of this plays out over the final episodes. It’s no coincidence that some of the most affecting moments in the entire show to this point involve either Tom Cavanagh or Jesse L. Martin, such as their quietly menacing final conversation in “Who Is Harrison Wells.”

“Who Is Harrison Wells?” was full of The Flash’s characteristic heart, humor, geek out moments, and internet shipper-baiting romantic entanglements, serving as what might possibly be the last normal episode of The Flash’s first season. The Arrow crossover was perhaps a tad forced, but in a fan-pleasing kind of way. And you really did have to simply ignore glaring questions like, “How did the cops not notice that the Eddie in the video shot his gun with the wrong hand?” and “Eobard Thawne never went back to dig up Harrison Wells’ body and dispose of it permanently, like through cremation?” 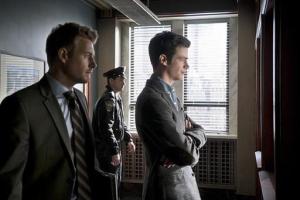 2. Laurel’s entrance in her first scene could have been staged better.  It felt too much like an actress standing off-camera waiting for her cue, and then walking straight into the shot to say one explanatory “Why is she here?” line before integrating with the other characters in the scene.

3. Why do people keep asking Caitlin to keep a secret? It’s not one of her talents.

4. You don’t want Caitlin to be the one to wake you up after you’ve been knocked unconscious.

5. I sometimes forget that Barry was in a coma for 9 months, not the coma part, the “9 months” part

6. Iris’ brain exploded when Eddie said his big secret was that he’d been working with The Flash

7. Better left unasked: how specifically are they going to clear the names of all those people The Everyman framed?

9. The “Think of Barry’s dad” card was played twice this episode, once by Barry and once against Barry.  Dirty pool, Mr. Allen.

AVClub – They gave it a “B”: “For the most part, though, this feels like an hour designed to get everyone on the same page before the fireworks to come. If the discovery of the real Wells’ body isn’t enough to convince Caitlin, the revelation of Wells’ secret hideaway certainly seals the deal. Not only do Barry, Cisco, and Caitlin find the Reverse-Flash costume and the tachyon prototype, they also lay eyes on the headline from 2024. It’s an ending strong enough to ease any worries that The Flash is content running in place.”