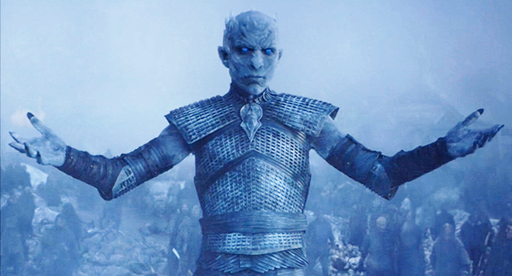 That’s how I felt watching the final 20+ minutes of Game of Thrones last night. In the episode, Cersei continued to defiantly suffer in prison, Tyron talked his way into becoming Daenyrs’ advisor, Arya inched closer to becoming an assassin, and Theon accidentally let Sansa know that her two brothers are alive. That’s all fine and good, a perfectly solid set of stories, particularly the new power duo of Daenyrs and Tyrion. However, in the final third of the episode Jon Snow, Tormund Giantsbane, and Dolorous Edd attempted to convince wildlings at Hardhome to return to Castle Black where they would be allowed passage through the Wall and given land to farm in exchange for their promise to take up arms and come to their aid whenever the White Walkers attack. Some of the wildlings were convinced that this was their best option, some weren’t. In general, the wildilings hate the Night’s Watch, the Night’s Watch hate the wildlings, yada, yada, yada.

While all of this is a testament to Jon’s growing leadership and a crucial next step beyond the war fought against the wildlings last season, it’s also very familiar. Beyond its opening scene, this show has mostly only ever told us how scared we should be of the White Walkers without showing us. It’s been almost three full seasons since we saw an army of White Walkers descending upon the Wall.  When do we get to see more of that?

And then as the wildlings boarded ships to Castle Black in “Hardhome” a series of avalanches hit the nearby snow-packed mountains, heralding the imminent arrival of White Walkers, who bring extreme cold wherever they go.  All of the characters stopped to look up, squinting while attempting to make anything out from the haze of snow and wind cascading down the mountains and toward the village.  The wildlings on the other side of Hardhome’s gate are the first to actually see the threat, rushing back to the gate which is quickly closed, leaving them to be slaughtered: 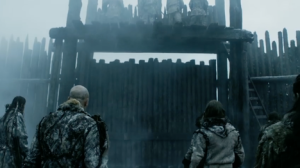 Thus began a full-on attack by the White Walkers and their army.  In a word, it was awesome, from Army of Darkness-style fights against skeletal monsters attempting to scale a wall to a giant using a lit tree and swinging it like a bat to take out rows of bad guys to Jon taking on a White Walker and discovering that his Valyrian steel blade can kill them. I kept waiting for it to end, for there to be some kind of cliffhanger. Surely, Game of Thrones didn’t just sneak a Helm’s Deep battle into the end of its 7th episode, exactly when no one would expect it. Instead, it kept going, ending with the chilling sight of the White Walker’s King staring down Jon Snow from the shore, raising his arms in the air and causing all of the people his army had just killed rise as the new recruits.  It left me more enthused about Game of Thrones than I have been since the end of last season.

I now feel like thanking Game of Thrones for this scene which has been nearly 5 full seasons in the making. In fact, my GOT fandom is tied to the White Walkers. The White Walker scene which kicks off the pilot is what hooked me on Game of Thrones.  An Entertainment Weekly story prior to the launch of the show had been my “in” to the GoT universe, leaving me with the rough impression that it was a grittier version of Lord of the Rings and HBO had sunk an unseemly amount of money into it. At that point, I’d heard the “It’s the next Lord of the Rings” marketing slogan so many times it had completely lost any sway. So, I sat out the entire first season, only taking notice when the internet collectively shit its pants after the ostensible lead character died in the penultimate episode. By the time I finally watched the pilot via Blu-Ray I still had little idea what the show was actually about other than a vague notion of it being like medieval England with occasional hints of actual magic.  I was still extremely skeptical of the whole thing.

The First Time We Saw the White Walkers

The opening scene of the pilot didn’t immediately grab me.  It follows three black-cad riders exiting some kind of gate and heading out into snow-packed woods, the scout of the group quickly venturing ahead and coming across mutilated corpses which have been laid on the ground in some kind of pattern. Horrified, the scout returns to the group, and a slasher movie breaks out. The scout is the scared one, another member of his party is the brave but rationale one who reasons they should head back, and the leader is a grade-A asshole who idiotically ignores any warnings, belittles the others for being scared and forces them to head directly into danger. So, of course, the asshole dies first, stricken down by the blade of this slasher scenario’s killer, which looks kind of like a human-sized Frost Giant from Thor. This villain is supernaturally strong, inexpeciablly fast even though we never actually see it running, never speaks a word and is mostly glimpsed in shadow. Its most defining characteristic is the way its blue eyes appear to glow, and, in a delightfully unsettling twist, it can re-animate the dead, turning what was once an adorable little girl into a blue-eyed zombie. The sequence ends with the brave man being decapitated and his head tossed at the feet of the scared guy, who looks up, frozen in fear. 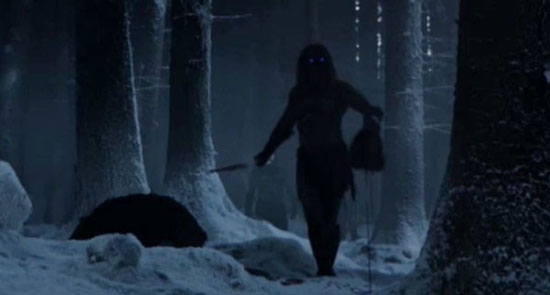 What the heck just happened?  This was not the show I was expecting.  I now know that the victims were members of the Nights Watch, and the mutilated corpses belonged to Westeros’ few free folk who live beyond a gigantic ice wall and face extreme hardships as a preferable alternate to living under the rule of the Iron Throne. The slasher killer was something called a White Walker, supernatural, practically unkillable set of ancient beings who present a larger threat to Westeros than any kind of comparably silly tussle over who gets to sit on the throne. The early tagline for the show was “Winter is Coming,” and I immediately understood what that meant – Eventually, the White Walker’s will attack, and when that happens Westeros is so thoroughly screwed.

What We’ve Seen of the White Walkers Since Then

I was hooked, and then an odd thing happened – the White Walkers mostly stayed away from that point forward. It was important that we saw one of them in action to understand how much they should be feared because we would soon learn that almost everyone doubted their existence entirely.  Ever since then, we’ve been slowly drip-fed more information about them. In season 2, we learned that one particularly foul leader of the free folk maintained a truce with the Walkers by routinely offering them baby boys as sacrifices. By the end of season 2, we saw a thoroughly cool shot of White Walkers leading an army of the undead in a march against the Wall, but next to nothing followed that other than Sam killing a lone Whiter Walker in season 3 using something called dragonglass. 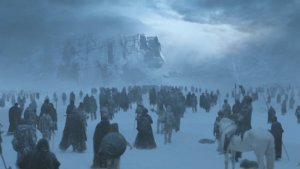 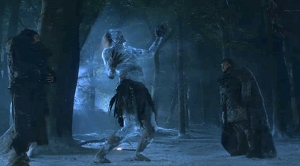 In season 4, we discovered what the White Walkers do with the babies they take – they turn them into new White Walkers.

The Hobbit/Lord of the Rings Comparison

The White Walkers are essentially the Sauron of this story minus any ties to a power ring. They are an ancient force which once dominated the land until an improbable coalition emerged victorious.  Unlike the Lord of the Rings movies, this information about the White Walkers is not shown to us via any kind of prologue.  Instead, it’s communicated in fireside chats at the Wall in the early episodes of the show.  You might have missed all of that, though.  So, as detailed over at the GoT wiki:

Eight thousand years before Robert’s Rebellion, a winter known as the Long Night lasted a generation. In the darkness and cold of the Long Night, the White Walkers descended upon Westeros from the farthest north, the polar regions of the Lands of Always Winter. None knew why they came, but they killed all in their path, reanimating the dead as wights to kill the living at their command. Eventually the peoples of Westeros rallied and in a conflict known as the War for the Dawn, they managed to defeat the White Walkers and drive them back into the uttermost north, with the Wall raised to bar their return.

Just like Sauron, everyone believed the villain had been vanquished when in reality it simply lay in wait for centuries and built up its power before launching a second offensive which can again only be defeated if the people of the world can stop with their petty civil wars and unite. It took the Fellowship to defeat Sauron, and in GoT they’ve now established that Valyrian blades kill White Walkers.  For the record, Jon Snow, Brienne and Jamie Lannister own the only remaining Valyrian swords in existence.  Plus, dragonglass also kills White Walkers, and the only way they can make more dragonglass is through access to actual dragons.  So, surely the Queen of Dragons, Daenyrs, will factor into the fight.

However, Game of Thrones has mostly been in the Hobbit portion of the Tolkien saga where Sauron is just some Necromancer causing a ruckus up north somewhere, something which almost none of the main characters care or even know about.  Like Sauron during that portion of his story, the White Walkers have stuck to the periphery, their mostly off-screen presence directly impacting the unfolding war between the freefolk and the Night’s Watch across the past three seasons.  Those hostilities have even caught the attention of Stannis Baratheon, the only “king” south of the Wall to recognize the threat.  Yet, from what I understand, the show has used the White Walkers more than the novels have to this point (I have not read any of the books; feel free to correct me), and the Battle at Hardhome was a complete creation of the show, making it the first time in the history of Game of Thrones we have seen the White Walkers in complete battle.

Either way, thank you, Game of Thrones, because that battle, particularly the remarkably pants-crapping ending, was the more stunning sequence on any TV show I’ve watched this year.