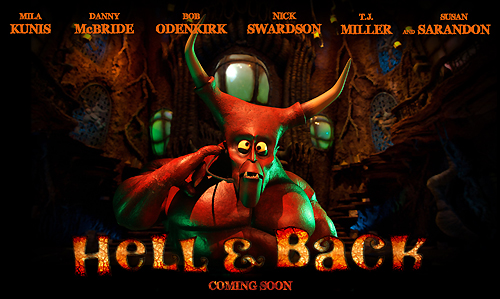 Hell & Back is an R-rated stop-motion animated movie, and that “R-rating” is probably going to be its defining characteristic because you just don’t see this kind of thing that often. Stop-motion animation is the realm of Laika (Paranorman, Coraline), Aardman (Wallace and Gromit, Shaun the Sheep) and Wes Anderson (Fantastic Mr. Fox), and while not all of those are really kids movies none of them rise to the level of an R-rating. As far as I know, the closest we’ve come to that in recent years has been the occasional oddball Adult Swim series like Moral Orel and Mary Shelley’s Frankenhole as well as Seth Green’s long-running Robot Chicken. So, Hell & Black dropping swear words throughout its brand red-band trailer is bound to raise some eyeybrows. Holy crap, someone made an R-rated stop-motion animated movie!

Yeah, but is it a good one?

It’s hard to tell at this point. It doesn’t look terrible but it doesn’t look particularly great either. Instead, it might at least deliver a couple of solid funny moments.

Remy, Augie and Curt are best friends since birth. When they jokingly take a blood oath and break it, Curt is dragged to Hell to be sacrificed. The guys must risk everything to save their friend from a slew of misfit demons, Greek legends and the Devil himself.

Directed by Tom Gianas and Ross Shuman, written by Hugh Sterbakov and Zeb Wells, and starring Mila Kunis, Danny McBride, Bob Odenkirk, Nick Swardson, T.J. Miller and Susan Sarandon. In other word, its partially directed by the guy responsible for Human Giant and Nick Swardsdon’s Pretend Time, co-written by a Marvel comics writer (The New Mutants, Venom: Dark Origins) who’s been exclusive to the company since 2006, and features a bevy of known comic actors (David Koechner, Rob Riggle, J.B. Smoove) as well as actresses (Jennifer Coolidge, Kerri Kenney-Silver, Maria Bamford) forever drawn to quirky projects.  The whole thing is produced by ShadowMachine, which is the company behind Robot Chicken.

October 2, 2015 from Freestyle Releasing, a distributor which helps small companies release movies in theaters but does not put up any prints and advertising costs. If past Freestyle movies like Zombeavers and Cake are any indication, Hell & Back probably won’t make it into many theaters.  Hello, VOD.