In the wake of The Intern’s #2 debut at the domestic box office, I was prepared to celebrate Nancy Meyers’ admirable endurance. This is her first movie in six years, but that time off was not exactly voluntary. It simply took her that long to find the money to get The Intern made even though her last movie, 2009’s It’s Complicated, appeared to be a financial hit. Hollywood has changed a lot in that short amount of time. Language-neutral, action-heavy movies that international audiences can easily watch rule the day. Nancy Meyers movies, i.e., mid-budget fare usually devoted to depicting the love lives of rich white women, no longer have a sure spot in the marketplace unless you include VOD.

This is a narrative which paints Meyers as someone unceremoniously shoved aside by an ageist, sexist and action-obsessed industry much in the same way The Intern’s titular protagonist, a retiree looking to prove his ability to adapt to the times at a e-commerce start-up (Robert DeNiro), is initially cast aside due to his age and old-fashioned ways. Between 2000 and 2009, Meyers directed four movies (What Women Want, Something’s Gotta Give, The Holiday, It’s Complicated) which grossed a combined $481 million domestic against a combined production cost of $320m. 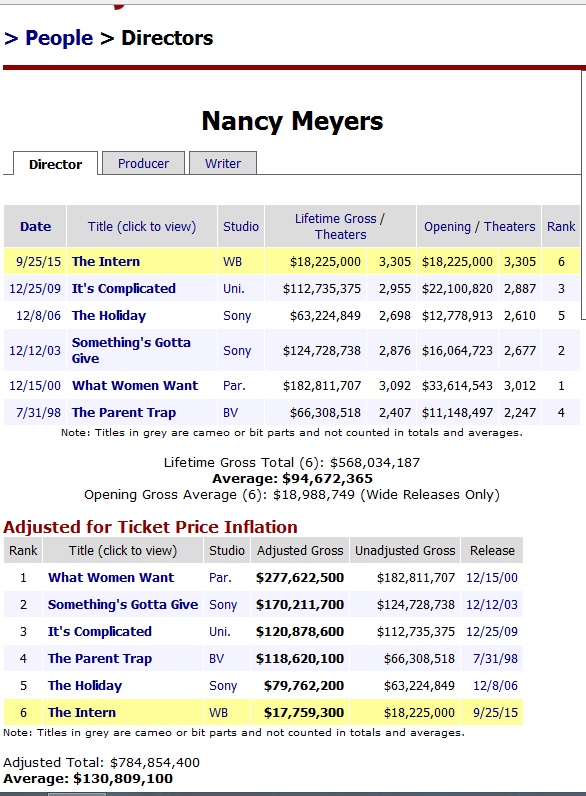 It’s even better at the worldwide box office where Meyers’ big 4 films combined for $1.037 billion. Clearly, her movies travel well in the international market, yet she still struggled to find a home for The Intern.

As she told Vulture:

“I come along with a movie about a 70-year-old man working for a 30-year-old woman (Anne Hathaway). You know, I can’t get Channing Tatum in this. And there are no really big women movie stars except for a couple of obvious ones that get movies made. The rest of them all fight for the same few parts. Anyway, it was hard. There’s only so much money the studios have, and they have to parse it out to the projects that they think are going to be the right ones. It’s a very competitive world, studio against studio. They met with me, we talked about it, but I didn’t get the green light. That went on for a couple of years. It was very frustrating and disheartening. I think Warner Bros. looked at their slate, and I think they felt that they needed a little diversity: “Let’s have one of these.” I felt I slipped in.”

Let’s put this into context.

In a fantastic Flavorwire piece early last December, pioneering director John Waters mournfully explained why he doesn’t make movies anymore, “The film business has changed. They want you to make it for no money. Early in my career, it was fine to have no money. Everyone starts out without money. But I have four employees today. I have no desire to be a faux-underground filmmaker at 68 years old. I don’t have any needlepoint pillows with slogans on them, but if I did, it would be ‘Don’t Go Backward.’”

What Waters is talking about is the supposed death of the mid-budget film, and the gist of it is that, to paraphrase Matthew Weiner, “Something happened that nobody can make a movie between $10 million and $80 million.” That kind of budget range used to represent Hollywood’s middle class of filmmakers, but the major studios have turned into sluggers swinging for the fences, disinterested in the solid single or double that the financial return on a mid-budget movie would represent. It’s called the “blockbuster mentality,” and it’s not exclusive to the film industry. Harvard’s Anita Elberse wrote an entire book about how it has taken over the entertainment industry in general.

While that makes for fascinating academic analysis, it leaves John Waters, David Lynch, Steven Soderberg and others forced to eat humble pie and go back to making the type of movies they want to make for next to nothing.  Most are instead opting to move to TV. As John Waters’ former protégé Rachel Talalay (Tank Girl, Freddy’s Dead: The Final Nightmare, now Doctor Who season 8) told Whovian Feminism, “People keep saying this is the golden age of television, because now movies are disappearing. So either you have to mortgage your house to make a movie, make it for $5, or you have to be on one of the ten big movies. They barely make any mid-budget movies, which is so sad. But then how do you train to get into television? Now you have these big name feature directors coming in and directing pilots.”

Given those trends, it’s surprising that Meyers has not followed her countless contemporaries who have simply gone where the work is: TV. While women like Jill Soloway (Transparent) and Jane Campion (Top of the Lake) adapted to the times, Meyers kept at it and secured a $40 million budget for The Intern. I’m glad she did; it is a lovely, feel-good movie with solid performances from DeNiro and Anne Hathaway.

Meanwhile, on the opposite end of the spectrum you have the rise of the multi-hyphenate indie producers/directors/writers/actors, headed by The League star Mark Duplass. Earlier this year, he delivered dispiriting yet equally inspiring keynote address at the SXSW Festival, arguing that the old days of waiting for the calvary to arrive to give you money to make a movie are over. Boo! But, no, the cool part is that you are the calvary now. People are literally filming entire movies with iPhones. Duplass threw down the gauntlet, “There’s no excuse not to make films on weekends with friends.”

More and more filmmakers are embracing Duplass’ mentality of making movies on the cheap with minimal sets and sold through alternate distribution models. Joss Whedon famously snuck in a movie he filmed at his own house during a break from the first Avengers.  Adam Scott and his wife raised enough money to film the comedy The Overnight at one house over 12 days. Lake Bell made her directorial debut In a World…., and even though she still hasn’t made a dollar off of it she recently told the AVClub that it changed her life and career forever. Paul Scheer filmed entire 13-episdes seasons of his AdultSwim series NTSF:SD:SVU in 20 days.  And so on and so on.

For someone like Nancy Meyers, that type of thrifty spending would be, as John Waters put it, going backwards. However, that’s the reality facing the next Nancy Meyers out there right now.

Most of Sandler’s normal co-stars provide voices in Hotel Transylvania 2, and the trailers look moderately cute, the reviews were better than they were for the first film in 2012 and it’s been quite a while since we’ve had a major animated film in theaters.   It all added up to Transylvania 2 setting a new September opening weekend record, beating the record held by the first Transylvania ($42.5m). 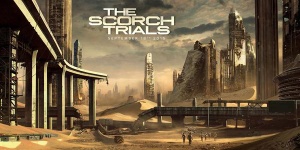 This is a 53% drop, compared to the first Maze Runner’s 46% drop in its second weekend. That’s not exactly a devastating, but it continues the narrative that Scorch Trials is not up to the par with the first movie. It opened roughly $2m short of its predecessor, and after 10 days it now trails Maze Runner’s pace by around $6m. Most likely, that gap will only grow wider, and Scorch Trials won’t quite equal Maze Runner’s $102m domestic total. Making matters worse, Scorch Trials cost nearly twice as much to make.

There might be some “What did we do wrong this time around?” conversations going on between upper level studio executives looking to justify why the balance sheets don’t look quite as good right now. However, they made a much darker, more horror movie-inclined sequel and put it out almost exactly one year after the last one.  Luckily, it seems to be doing perfectly fine overseas.

Universal is having the best year of any film studio in history. So, they can afford to experiment, and that’s exactly what they’ve done with Everest, making the near-unprecedented choice to exclusively open in 545 IMAX theaters this weekend before going wide.  The only other comparison was Mission Impossible: Ghost Protocol, which pulled it off in mid-December 2011, grossing $12.7m from just 425 theaters. Everest managed $7.2m in its limited opening, strong enough to suggest big things for its nationwide expansion this weekend. Instead, it made $13m, which doesn’t really qualify as a “big thing,” more like “just ok.” You can see that this experiment was not repeated internationally where Everest has been opening wide in multiple countries and pulling in big numbers. 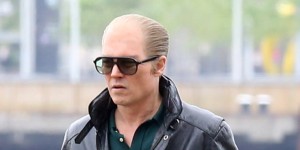 Before The Visit, the found footage genre seemed fairly dead as a box office draw. Earth to Echo’s $38.9m was the genre’s high-water mark in recent years, and that’s not even a horror movie. Then again, The Visit is falling fairly fast after its big opening weekend.

A low-budget horror movie opening with less than $3.4m. Eh. No big deal, right? You win some, you lose some. However, even if there weren’t a lot of butts in theater seats to see this movie there have been a lot of extra eyeballs looking to see how much money it made. Why? Because Eli Roth is a name. “Eli Roth made this? Didn’t he make Hostel? Oh, I’ve heard of him.” Secondly, Roth actually finished this over a year ago but it’s been delayed by distribution issues. Thirdly, the company which finally picked up Green Inferno was trying to pioneer a date-driven approach to marketing. As Wired explained, people like the Duplass Brothers are adapting to the modern realities of the film industry by embracing alternate distribution methods and not overly concerning themselves with playing in theaters. For Green Inferno, BH Tilt opted to use 2015 technology to optimize box office returns by keeping marketing costs as low as possible.

As Roth told Wired, “The [prints & advertisings costs on] low-end releases are $30 to $35 million. We have $8 million, and that’s to put the movie in theaters, do the posters, cut all the clips. Everything.” With such limited resources, the plan has been to push forward with highly targeted digital marketing directed especially at the most die-hard horror fans. Unfortunately, it didn’t quite work out for them. Tilt told BoxOfficeMojo that an opening in the $4-5 million range would be a success; they didn’t say what $3.4 million would be, though it’s safe it’s not as high as they would have wanted. Worse yet, those diehard fans who did show up opening night didn’t particularly like what they saw, grading it as a C- in CinemaScore.

This comes despite only playing in 53 domestic theaters this weekend.

What’s Up Next?: The Martian, Nationwide expansion for Sicario and IMAX-only release of The Walk