In the past 12 years, Nancy Meyers has written and directed Something’s Gotta Give, The Holiday, It’s Complicated and now The Intern, and at this point Nancy Meyers movies are a genre unto themselves, just as prone to signature director trademarks as anything Martin Scorsese or Steven Spielberg makes.

A Nancy Meyers movie almost exclusively features rich white women going through marital problems or an unexpected romance in later age. All of these women live in homes so spectacularly designed that one suspects had Meyers not become a director she would have made a killing as an interior decorator. In fact, much in the way many women show their hairdressers pictures of actresses and say, “Make my hair look like her’s,” plenty of people show their interior decorators pictures from a Nancy Meyers movie and say, “Make my home look like that.” Nancy Meyers movies are built around old-fashioned leading men (Robert De Niro, Steve Martin, Alec Baldwin, Jack Nicholson), but the leading women get top billing (Anne Hathaway, Meryl Streep, Diane Keaton). Nancy Meyers movies have remarkably low-stakes with plots that hinge on the emotional beats more than anything else. Nancy Meyers movies are unapologetically autobiographical. For example, if Nancy Meyers was a divorcee remodeling a room in her house then Meryl Streep gets to play a divorcee remodeling her home, but to make it a movie Meyers lets her cinematic stand-in have an affair with her ex-husband while also dating her architect (It’s Complicated).

As such, when you tell someone that you are going to see a “new Nancy Meyers movie” that can be as equally charged a statement as “I’m going to see the new Michael Bay movie.” For some, it’s an instant turn-off or an occasion for jokes, like “What rich white people will be having rich white people problems this time?” For others, it is as a cause for celebration, and not just because of the near-guarantee of some tantalizing architecture porn (although that’s certainly part of the appeal). Very few other filmmakers bother with telling the stories of strong, but vulnerable successful, older women. These movies are just as enticing to certain audiences as comic book movies are to others.

For The Intern, Meyers decided to play around with her usual storytelling formula. There is no older actress who is basically playing a different version of Meyers. This time around the story is actually centered around an older man, in this case Robert De Niro as Ben Whittaker, a 70-year-old widower in New York who goes to work as an intern at an upstart fashion website run by a 30something named Jules Ostin (Anne Hathaway). Ben has something like forty years of experience in business, yet Jules doesn’t want him around, fairly certain that her second-in-command at the company (Andrew Rannells) started the Senior Citizen Intern program (which the movie argues is a genuine thing happening at more and more businesses these days) without consulting her.   He says he did, but she’s so busy she completely forgot about it, which we’re more inclined to believe since we witness just how little time she has due to her multiple responsibilities (e.g., if she schedules you for a meeting don’t be a single minute late because she’ll almost always have another meeting scheduled immediately after your’s).

However, the seemingly inherent conflict between Ben and Jules is simply the first act because while this movie starts out as the story of a widowed, retiree looking to prove he has more to offer the world it turns into an updated version of Meyers’ 1987 film Baby Boom, which starred Diane Keaton as a New York business woman whose career and love life could not survive her choice to become a single mother. 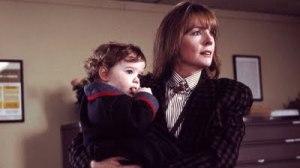 As the hard-working and rather affable Ben inevitably befriends Jules and earns her trust and respect we gain more access into her life, discovering that she has a young daughter (JoJo Kushner) and a husband (Anders Holm) who gave up his own career in marketing to take care of the kid and let Jules pursue her dream. BTW, Jules’ Brownstone house is as gorgeous as you’d expect.

Despite appearances, all is not well on the homefront. Jules can’t be everything to everyone, and her apparent struggles to balance her work and home life result in the investors behind her company attempting to force a CEO on her, a decision her husband seems to support in the hope that more free time for Jules could save their marriage. Will she give up complete control of her baby (i.e., the company) to maybe save her family? How exactly will her growing friendship and mentor-mentee relationship with Ben impact her decision?

Those are the questions that drive The Intern, and the fact that Jules has an older man to lean on for advice is what separates this from Baby Boom. Meyers is not merely pausing to remind us that work/home life struggles still exist and housewives still shun working wives (as we see when Jules drops her daughter off at school); she’s also doing generation gap comedy and drama, making not Jules and her husband the lead characters but instead Jules and Ben.

It feels like vaguely newish territory for Meyers. As she told Vulture, “I felt sort of done with the romantic story. It just wasn’t what I was feeling. And I felt I’d covered that subject pretty well: to fall in love, and out of love, and be divorced, be Cameron Diaz’s age, or be Meryl Streep’s age. So I thought, A relationship between a man and a woman that’s not romantic, this is interesting. I’ve never done that. I think the age difference kind of really keeps the romance out of it. But I guess really, to be honest with you, if she were 60 or he was 35, I think they’d be wonderful together.” 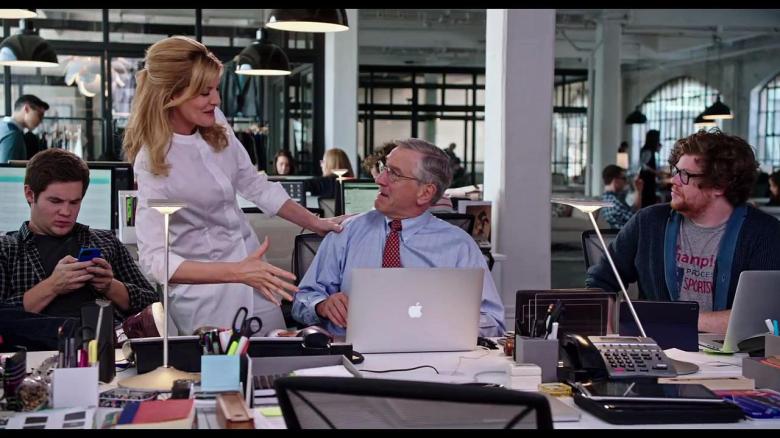 Of course, she couldn’t really help herself. There is some romance, with Ben adorably courting the company’s on-site masseuse (Rene Russo) and Ben also acting as matchmaker for two of the company’s younger employees. In fact, the movie is arguably never more enjoyable than when Ben is teaching the T-shirt wearing, unshaven, emoji-texting boys in the company how to be real men. There is one scene, highlighted in all of the trailers, where Meyers, through Hathaway’s character, seems to channel Alicia Silverstone from Clueless (“We’re expected to swoon?”) in bemoaning the way supposed men dress these days. It’s adorable, then, to watch how one of Ben’s fellow interns takes the criticism to heart and gradually changes his fashion sense throughout the film, trying to mimic the suit-wearing Ben’s “dress for success” mantra.

Not surprisingly, this movie is entirely dependent on De Niro and Hathaway making Ben and Jules into people worth caring about, and, come on, it’s De Niro and Hathaway. Of course they deliver fantastic performances (I am not one of the Hathaway haters), but, almost more importantly, they are fantastic together, gamely playing out a somewhat inverted version of what Hathaway and Streep enjoyed in The Devil Wears Prada. De Niro is a particular delight, making it obvious why everyone at the company falls in love with him.  He also does not fumble the only moment the film gives him to register his grief over his deceased wife (we learn very little about her or her death). Speaking as someone who used to work as an assistant for a woman in a very similar position to Jules, nothing about Hathaway’s performance rang false for me.  Meyers’ script is breezy or dramatic when it needs to be and well-paced. A zany comedy gag halfway through could have been cut to shorten the movie’s two-hour running time, but the gag also happens to be the funniest section of the movie.

The Intern is an enjoyable, but relatively benign generation gap dramedy. It is a Nancy Meyers movie meaning you should generally know what to expect, which makes it all the more surprising when The Intern turns out to have a higher goal than the lighthearted fantasy of a rich white woman having an affair at a beach house in The Hamptons (Something’s Gotta Give) or another rich white woman encountering romance while remodeling her gorgeous house (It’s Complicated). There is still a degree of fantasy at play (who wouldn’t love having Robert De Niro around to offer sage wisdom when you really need it?), but it’s a pleasant fantasy to indulge when The Intern has a little more to say, even if you’re left with the sense that Meyers could have dug a little deeper into the material.

But the houses have become like characters in your films.

That’s what I think, but there’s an awful lot of attention paid to these things and architecture porn and all that stuff. On this movie, I’ll talk about it. I know it’s there. I know I spend a lot of time on it. I like houses. You can see it from my own place. I even like paintings of interiors. If you look around my house, you’ll see there’s a lot of interior paintings. I like to visit houses. If I go to a city I’ve not been to before, I find out, who lives here? I go to their house. I love the Dickens house. I will check out people that I admire and I’ll see where they live and, when I go to that city, I’ll drive by. I don’t know what it is. I’m not alone in being fascinated by how people live.

Not that sexism doesn’t exist in the movie. A character calls Hathaway’s company a “chick site.” Did you include that because people have called your movies chick flicks?

For sure. And somehow there’s a judgment attached to it, and that judgment is never applied to films that men also go to, though I don’t think my movies are just attended by women. I read it in reviews or just snarky comments you can read online. Over the years, it’s been hard to get male movie stars to be in a movie if a woman’s the lead, where a great, great movie star, a woman, will be in a movie where the man’s the lead. So there’s just not parity there, we’re not on equal footing.