Oh, wow. I have dreaded this episode ever since Jay Garrick’s goofy metal helmet with Roman god-inspired wings on the side popped out of the wormhole and into STAR Labs in the season finale. But when I stop to think about it I realize that I have always kind of been waiting for The Flash to push things too far into extreme comic book territory. I kept asking in season 1 reviews if the show would be able to withstand the introduction of game-changing characters like Firestorm and Gorilla Grodd or if the notion of a “speed force” and Barry’s “run real fast to travel through time” trick would signal comic book overload.

That’s more on me than on The Flash, though. This is a show which traces its origin to the moment that a 13-year-old Greg Berlanti picked up Crisis on Infinite Earths in 1985 and openly wept in the comic book shop when he reached the page depicting Barry Allen’s shocking death. It converted him into lifelong fandom, and he circled back around to absorb all of Barry Allen’s adventures from the Silver Age era of the comics (1956-1970), clearly carrying the optimism that defined the era to The Flash, which is just one of like 50 shows he produces these days. However, he’s also not backing down from the inherent silliness of the era meaning that, yes, this show will have talking gorillas and occasional bee-themed villains whose every other line is a bee pun. Plus, as a CW show it is mandatory that it have a rotating lineup of potential romances. So, of course “Flash of Two Worlds” wasted no time setting Caitlin up with Jay and Barry with Patty Spivot, his current girlfriend in the comics (last time I checked).

The problem for me is that I’m not a fan of the Silver Age. The comic books of my youth seemed to all be written by Frank Miller and Alan Moore. Even without that, I have a built-in bias against the most comic book-y of comic book tropes, such as multiple universes and nonsense explanations (e.g., Robin came back to life because Superboy punched a hole in reality?). It’s not specific to any one era either. I rolled my eyes when a relatively recent New 52 story revealed that after multiple issues of build-up the big, ominous threat to the whole DC universe was just an evil Justice League from an alternate universe.

That’s why I kept asking whether or not The Flash really needed Gorilla Grodd, and I thought the same thing about Jay Garrick. But this is a show which is proud of The Flash’s long comic book history. Berlanti, his producers, crew and special effects guys don’t view things like Grodd and Jay as potentially goofy-sounding obstacles. Instead, they are crucial elements of the Flash mythos, and it is their honor to bring them to live-action. Jay was the original Flash back in the 1940s, and after he fell out of popularity and was replaced with Barry Allen he was eventually re-introduced as a character from a parallel universe, forever opening up the can of worms known as the DC multiverse. Of course The Flash wouldn’t back down from any of that and embrace it head-on. When The Flash works these things are but take-it-or-leave-it add-ons to the always compelling emotional drama.

And that’s probably my biggest concern about Flash season 2. The first season had the murder mystery hook, i.e., “Who killed Barry’s mom?”, which directly informed Barry’s engrossing emotional relationships with his rotating band of father figures, Joe, Harrison Wells and his actual father. It gave the season a storytelling form just as the first season of Arrow was built around Oliver Queen knocking people off of his father’s enemies list and unraveling a conspiracy which ultimately was more personal than he could have imagined. Once Arrow lost that guiding structure it eventually lost its way, replacing a clear direction with just stacks and stacks of comic book craziness, and the same people who made Arrow make Flash.

It’s like a bait-and-switch. The first season draws you in with a familiar hook, and the second hopes you’ll stay because you’ve grown to like the characters. It works. I can’t really say that “The Man Who Saved Central City,” i.e., Flash’s season 2 premiere, was an amazing episode, but it just felt so good to see the characters again. Cisco’s jokes seemed even funnier because we hadn’t seen him since last May, and Barry’s heart-to-hearts were all the more tear-inducing for the same reason.

“Flash of Two Worlds” is arguably the true start of the second season, more concerned with setting up new stories than wrapping up season 1 stories. Jay Garrick shows up, explains how he’s from an alternate universe, Dr. Stein maps it all out for a slightly slower-on-the-uptake-than-he-should be Joe and we see Jay train Barry on new ways to use his powers to be able to take down a villain who crossed over from what Dr. Stein called Earth-2. As the producers have made perfectly clear in interviews, the first season was about Barry and Harrison as good guy/bad guy, pupil/mentor, and in the second season Jay will mentor Barry but more like an older brother or football coach. It will have a different feel to it, and the emotional anchor of “Flash of Two Worlds” was Barry’s hesitance to trust Jay after having been burned so thoroughly by Dr. Wells. This manifested itself as Barry being kind of dickish to Jay, and Iris using her words to slap Barry across the face to get him to open up, much like she did in the season premiere when he pulled an Oliver Queen and tried to do everything on his own. 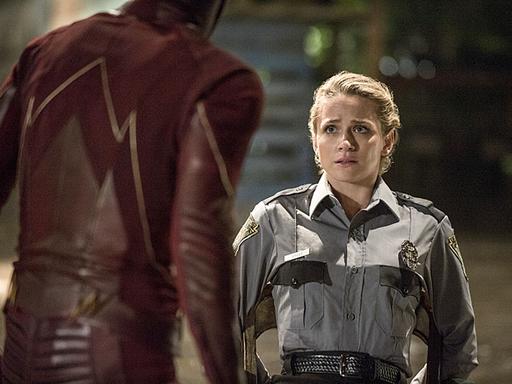 To be honest, I didn’t particularly connect to Teddy Sears’ stoic and “standard hero” take on Jay, although he makes that helmet look about as good as it possibly could. I was  more receptive to Shantel VanSanten’s Patty Spivot, who seems like the Scrappy Doo of this show. They will both be huge characters this season, yet the biggest change might be the notion of dopplegangers running around thanks to the 52 breaches opened up around town. This could turn into a Fringe situation on us. Should we start calling that Harrison Wells from Earth-2 Faux-Wells?

I’ve already forgotten the name of the villain-of-the-week (Spider-Man’s Sandman but with a different name about covers it), and the formula of “Zoom sends another assassin from an alternate universe to kill Barry” might grow tiresome. However, “Flash of Two Worlds” had to pull off an insane amount of heavy lifting, and I came out of pretty well clear on the multiverse, Jay Garrick, Patty Spivot and Dr. Wells thriving in Earth-2. Easier said than done.

2. So many comic book easter eggs in this episode…it was exhausting. I’ll just mention one of the most obvious, which is that the 52 breaches is an obvious reference to the New 52.

3. The Earth-1 and Earth-2 versions of the bad guy must have walked right by eachother outside the police building before the Earth-2 version attacked Joe and Patty, right? Wouldn’t the Earth-1 version look up and think, “Holy crap, I have a twin!”

4. Not a fan of Cisco keeping his powers a secret, regardless of his explanation that he’s spooked by all of it because he essentially go the powers from the very evil Dr. Wells (um, so did Barry).

6. Is it just me or did the Harrison Wells from Earth-2 instantly seem evil? Eh, either way, welcome back, Tom Cavanagh.

If you know what Earth 2 is, or even if you don't, I would suggest you watch #THEFLASH tonight!! Really excited to see what you guys think

Doppleganger…wait am I watching the Vampire Diaries? #Flash -Kat

I know it's a tiny thing…
…but it's SO nice to see the Flash in action
w/ his lightning bolt on a white circle.