Jennifer Lawrence is right about the pay disparity between genders in Hollywood, but she might have picked the wrong movie to point to as an example.

But, first, some background.

When the Sony hack revealed that both Amy Adams and Jennifer Lawrence were paid less than their primary male co-stars (Christian Bale, Bradley Cooper, Jeremy Renner) on American Hustle, it seemed like an especially troubling example of the gender gap in Hollywood. This was a movie financed by female producer (Megan Ellison) and distributed by a studio with a female president (Amy Pascal, who’s since been forced out). You’d think that on a project being overseen by women there’s no way the actresses would get screwed on salary. How hopelessly naïve. As Pascal explained afterward, she’s ultimately a businesswoman, and in her view it’s bad business to pay someone more than what they’re asking for. It’s not her fault that Jennifer Lawrence and Amy Adams had agents who didn’t fight harder for their clients.

To some, that seemed like a tone deaf and insensitive response from Pascal, but it was an honest one.  As it turns out, Jennifer Lawrence ultimately agrees, recently arguing in an essay in Lena Dunham’s feminist newsletter that it was her fault (or, more accurately, her agent’s fault) for giving up out of fear that taking a harder line on negotiations would cause the people at the studio to regard her as a bitch. However, she pledged to never let that happen again, concluding that she’s finished with trying to be liked. 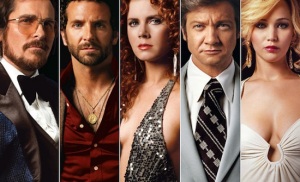 By this point, Lawrence’s essay has made her into even more of a folk hero than she already was. Countless actresses stepped forward to applaud her courage, and Bradley Cooper now claims he will try to negotiate with his female co-stars on future movies, hopefully presenting a united front and guarding against gender discrimination. If not for Lawrence’s essay that’s probably not something Cooper would be doing, or at least he wouldn’t be talking about in interviews.

That all sounds great, but have you actually seen American Hustle? Jennifer Lawrence isn’t actually in it all that much. Shouldn’t Bale and Cooper get paid more simply based on the fact that they have lead performances whereas Lawrence is most definitely more of a supporting player?  Bale has 60 minutes of screen time, Adams has 46 minutes, Bradley Cooper has 41 minutes and Lawrence has just 20.

Should that not matter?  Sony’s marketing department sure tried to fool everyone into believing that Lawrence was a huge part of American Hustle when in fact that is truly Bale, Adams and Cooper’s movie.  Isn’t an actor’s salary generally a direct reflection of their perceived earning power?  Wasn’t Lawrence a bigger draw than Jeremy Renner by the time they made American Hustle, at which point both Hunger Games and Silver Linings Playbook had already come out?  Shouldn’t she be paid more even if it’s for less overall work?  Or is that also unfair?

When it comes to paydays, women have long held the short end of the stick, not inconsistent with many other industries. While it’s refreshing to see Lawrence put herself out there for a worthy cause, I’m not sure that American Hustle is the movie to use as Exhibit A. Here’s why. Everybody on that particularly film worked for heavy discount to make the numbers work. By the time Lawrence was brought in by her Silver Linings Playbook director David O. Russell to round out that stellar cast, deals were done with other cast members. And then they were changed, as several others gave up back end pieces to make things more palatable to Lawrence, who worked a lot fewer days than most everybody else.

There was a time when actors had hard set fees. It didn’t matter if your movie was a tiny little period piece with limited box office appeal like 1996’s Mary Reilly. If you wanted Julia Roberts to star in it you had to pay her $10 million fee and give her a private jet. In that system, American Hustle would have never been made, at least not for its reported $40 million production budget:

Everybody sacrificed to get that movie made; if the actors and director had been greedy and insisted on their usual fees, a worthy film would have died at the negotiating table. That’s why you rarely see films with that many bankable stars. American Hustle got 10 Oscar nominations, including for all four of those actors and Russell for directing and co-writing. From Adams on down, all got momentum from success that benefited them in subsequent film negotiations. That includes Lawrence, who I hear got paid $20 million to star in Sony’s Passengers, a fee that was $5 million or $7 million more than her co-star Chris Pratt got.

That’s always been the argument for why actors should make prestige pictures for less money. You do one for the art to gain momentum so that you’ll have plenty of negotiating power when you want to do one for the commerce.

It’s too simple to peg these deals to the anatomical terms Lawrence used in her essay. It’s all about momentum and leverage and some deals benefit studios and others benefit talent. Everybody kicked and moaned when Marvel insisted on as many as ten options for actors who signed on for superhero roles. You don’t hear anybody complaining much now, because those movies have been such huge successes that helped all those actors make better deals for other movies. That includes Scarlett Johansson, who because of her Black Widow turns in Iron Man and The Avengers was set by Luc Besson for Lucy, and off that got $10 million or more for the upcoming film Ghost in the Shell. Is she worth it? Time will tell.

Back when Johansson first signed her Black Widow contract, the industry trades wanted her agent tarred and feathered, fearing she had become Marvel’s indentured servant with an embarrassing salary. That seemed to work out pretty well for her, though.

Fairness has never been at the core of pay for actors who in films from American Sniper to Forrest Gump have made back end paydays of $40 million or more for what amounts to a few months of work. Almost no actor ensures an opening weekend bonanza, and gone are the days of first dollar gross paydays where you would hear that an actor like Tom Cruise earned $50 million from a Mission: Impossible film before Paramount recouped the hundreds of millions it invested in budget and P&A. Men, more than women, benefited from that system, partly because it was thought they were more reliable than women in action vehicles that performed globally.

In the heyday of the big contracts of the 80s, 90s and early 2000s, Julia Roberts and Demi Moore commanded hefty paydays, but their set fee was often times around half what the top paid male stars got, not necessarily due to sexism but more because an Arnold Schwarzenegger movie was expected to make more money worldwide than a Julia Roberts one.

Jennifer Lawrence is generally right, though, and Fleming things good things will come of this:

All that said, good for Lawrence, for being willing to wave the flag for fairer paydays and raise awareness at the risk of being told to shut up because she makes a fortune now on every movie. Actresses on the low end of the pay scale are the ones who might benefit from her words. I applaud her and other actresses—and actors like Cooper—who are commenting on her comments.

Mostly silent in all of this has been Amy Adams. Jennifer Lawrence probably isn’t the one who got screwed on American Hustle; Adams is, but maybe because of Lawrence’s essay that won’t happen to her again.