Historically, October is a hit-or-miss month for new movies.  In some years it’s a freakin’ dead zone, in others it’s when the Hollywood studios start stirring up some excitement before the big hitters arrive in November.   The past couple of Octobers have been better than usual.  Led by the trio of Gone Girl, Fury and Annabelle, 2014 witnessed the highest-grossing October in film history.  That was partially a result of the studios switching gears and targeting the month as a prime launching pad after October of 2013 delivered three surprisingly huge hits in Gravity, Captain Phillips and Bad Grandpa and October 2012 had Taken 2 and Hotel Transylvania.

Based on that recent history, the studios didn’t hesitate to stuff October 2015 full of new movies.  Fox and Sony were sure that audiences would greet The Martian and The Walk as must-see cinematic experiences.  WB hoped Pan would prosper after being moved out of its original summer release date.  Universal and Lionsgate opted for word-of-mouth-building platform releases for potential awards contenders Steve Jobs and Sicario, respectively.  Universal thought a mid-October release for Guillermo Del Toro’s Crimson Peak perfectly set it up to become the must-see horror movie of the month, and Sony hoped for similar results for its younger-skewing horror comedy Goosebumps.  Disney figured those movies left an opening for a serious adult drama and opened the Tom Hanks/Steven Spielberg collaboration Bridge of Spies, and coming in behind all of them was Woodlawn, a faith-based movie.

The only true breakout hit in the bunch, though, has been The Martian.  Pan, Crimson Peak and The Walk bombed.  Relative to its budget, Sicario will probably struggle to break even, and while Goosebumps has likely kick-started a new film franchise it’s not exactly posting eye-opening numbers (give it time, especially overseas).  Bridge of Spies is holding well, but it is easily the weakest-performing Hanks/Spielberg collaboration to date, even trailing the mostly forgotten 2004 comedy The Terminal.  Woodlawn is out of the top 10 after one weekend.

There’s been one movie everyone had to see, The Martian, and a bunch we swear we’ll get around to eventually, which is partially why Bridge of Spies and Sicario posted such strong holds throughout the month.

Then all hell broke loose this past weekend with five new wide releases, all of which either disappointed or outright bombed in historic fashion:

Steve Jobs expanded wide to just south of 2,500 theaters and grossed $7.2 million when it was expected to finish somewhere between $15 million and $20 million.  There is hope.  It received a CinemaScore of A- meaning it could hold well in the coming weeks.  Ultimately, though, it performed like a specialty release, not like a major Hollywood studio production with awards potential and hopes for Social Network-like business (which opened to $22 million in 2010).  To make matters worse, this is pretty much exactly what the film’s original studio, Sony, said would happen if they didn’t cast an actual star to play the lead role.  When Danny Boyle insisted on casting the respected-but-not-yet-a-box-office-draw Michael Fassbender as Jobs, Sony tried to lower the budget to $25 million to hedge their bets, and the producers balked, taking it to Universal where they got a $30 million budget.  Universal can afford to take a risk like this after the year it’s had, but Sony knew this was going to be a difficult movie to sell (e.g., no bankable star, not a traditional biopic, Sorkin is more divisive than ever after The Newsroom, Jobs’ story is already well known, that Ashton Kutcher Jobs movie didn’t do well).

Lionsgate financed much of the $75 million budget for Vin Diesel’s ill-fated supernatural action movie The Last Witch Hunter through foreign presales and complicated contracts, although they were still on the hook for the marketing costs.  Translation: Their financial exposure is limited, but an opening of $10.8m is pretty dreadful when the most pessimistic predictions had it landing at least in the mid-teens.  It’ll have to over-perform internationally, but that didn’t save Diesel’s 2008 bomb Babylon A.D. and it only kind of saved Riddick because that movie had a manageable budget ($38m).  Right now, Diesel has Fast & Furious and his voice-over work in Guardians of the Galaxy going for him, but other than that his movies really struggle.  Also, at this point Lionsgate has a bad track record with genre pictures not named Hunger Games or Diverent at this point (e.g., I, Frankenstein, The Legend of Hercules, Ender’s Game, Dredd, Conan the Barbarian).

This is a franchise which peaked four years ago when Paranormal Activity 3 opened to $52 million and ended its run with $104 million.  It’s been downhill since then with Activity 4 opening to $29m and trailing off to a total of $53m in 2012 followed two years later by The Marked Ones ($18m opening/$32m domestic total).  As such, it’s not a surprise to see Ghost Dimension limp in at $8.2 million for the weekend, but this is where it’s get complicated.  Ghost Dimension played in around 1,300 fewer theaters than The Marked Ones because multiple theater chains are refusing to show the movie due to Paramount’s experimental deal with AMC and Canada’s Cineplex aimed at shortening the theatrical release window.  Typically, theaters have the exclusive control of new movies for 90 days, and Paramount is challenging that model with Ghost Dimension and next week’s Scouts Guide to the Apocalypse.

As BoxOfficeMojo summarized, “The film will arrive on VOD once it’s playing in fewer than 300 theaters. With that comes an agreement to share a portion of the VOD sales with participating theaters up to 90 days from its theatrical opening. The problem now is Paramount most likely didn’t plan on the film playing in so few theaters to begin with. After all, it’s one thing to open in 2,800+ theaters, as did The Marked Ones, and dipping below 300 theaters in your fifth weekend in release. However, opening in nearly half the number of theaters means cutting that theater count much sooner, widening the number of days the studio will be splitting VOD profits with participating theater chain.”

By refusing to play ball, the other theater chains are more or less killing this experiment for Paramount, and we can expect similar results for Scouts Guide to the Zombie Apocalypse next week.

Rock the Kasbah Is No St. Vincent

Last October, The Weinstein Co. did a platform-release for Bill Murray’s About a Boy-esque comedy St. Vincent, and the result was a seemingly solid word-of-mouth hit that hung around in the box office top 10 for six straight weekends.  Open Road Films tried to capitalize on this apparent Bill Murray renaissance by opening Rock the Kasbah in just over 2,000 theaters, but what they got was $1.5m, i.e.,  the fifth-worst all-time opening for a movie playing in at least 2,000 theaters.  The only good news is that even though Rock the Kasbah is a bomb of historic proportions (the biggest of Murray’s career), it’s somehow not the biggest bomb of the weekend. 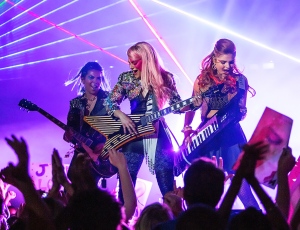 With just $1.3 million for a per-theater average of $547, Jem and the Holograms had the fourth worst opening for any movie playing in at least 2,000 theaters.  As THR pointed out, though, the only movies to have done worse were a 10th anniversary release of Saw and “two indie titles that weren’t backed by a major distributor, or serious marketing spend — Oogieloves in the Big Balloon Adventure ($443,901) and Delgo ($511,920).”  Luckily, the production budget on Jem was only $5 million, but Jason Blum and his fellow Blumhouse producers were refreshingly candid while addressing this embarrassing failure at the Film Independent Forum 2015 yesterday, “At the beginning of the year we had 10 wide releases [planned]. This time last year I’d had the 10 movies categorized as ‘sure thing’, ‘I’m a little nervous,’ ‘I’m a lot nervous.’ And of course.  I remember thinking “Jem is definitely a sure thing,” like I don’t have to worry about that one, it’s going to take care of itself. And in fact it did the worst of all of them. So, it’s very torturous and it also should [tell you] that anything any of us say should be taken with a big grain of salt.”

Blumhouse’s Head of Motion Pictures Cooper Samuelson chimed in to explain that the standard operating procedure in Hollywood after a failure like this is to run away from it, “I think part of the challenge is that when movies are very expensive jobs are on the line. When you have a commercial failure and it could cost people their jobs, no one’s gonna be like ‘hey can we just bring up The A-Team again?’”  That theoretically should mean that Blumhouse is better situated to react to this failure instead of moving on and making the same mistakes over and over again, “When you have low budget, we don’t have to worry we’re going to get fired if one of them fails, so we can talk about failures [openly].”

Into this smoking tire fire of a marketplace for new movies comes three new wide releases next weekend, all three of which have shaky box office prospects: Bradley Cooper’s Burnt, Sandra Bullock’s film festival pick-up Our Brand Is Crisis and Scout’s Guide to the Zombie Apocalypse.  Rock the Kasbah and Jem and the Hologram‘s just set the bar for failure pretty damn low, though.

Click/Tap the following to see a larger version: