Prior to the release of Jurassic World this summer, I went through a real big Steven Spielberg nostalgia binge.  I re-watched Jurassic Park and then E.T. and then Close Encounters of the Third Kind and then Jaws, etc.  It was a reminder of how much I miss the version of Spielberg who seemed to always appeal to the kid in everyone, wowing us and making us walk out of theaters thinking, “How’d they do that?”  But, of course, at the same time he was making those movies he was also making The Color Purple, Empire of the Sun and Schindler’s List.  In recent years, he’s busied himself with Oscar contenders (Lincoln, War Horse, Munich), technical experiments (Adventures of Tintin), an obligatory sequel for which he apparently had little passion (Indiana Jones & The Kingdom of the Crystal Skull), low-key character dramas (The Terminal) and a conman dramedy (Catch Me If You Can).

Now, he’s re-teamed with Tom Hanks on Bridge of Spies, which dramatizes the real-life Cold War tale of a United States attorney (James B. Donovan, played by Hanks) first charged with defending a captured Soviet spy (Rudolf Abel, played by Mark Rylance) in court and then with unofficially negotiating a prisoner exchange using the spy as a bargaining chip to reclaim Francis Gary Powers (Austin Stowell), a U.S. pilot shot down over Soviet airspace in 1960 while flying the U-2 spy plane.  The title refers to the bridge that linked West Berlin and East Berlin, and the script was co-written by The Coen Brothers and newcomer Matt Charman.

You’d think that Bridge of Spies would differ from Spielberg’s most recent work, Lincoln, in the sense that there he was dealing with an American icon whereas here he is focusing on an American everyman who nobly maintained the peace at a tense time during the Cold War.  However, anytime we see Donovan in a courtroom we get plenty of low angle, hero shots, cinematographer Janusz Kaminski bathing him in sledgehammer-symbolism-bright-light just as he did with ole Honest Abe in Lincoln.  If you liked it in Lincoln, you’ll like it here.  If you didn’t it, it’ll probably be a little annoying, although there’s far less of it this time.  Also, if you liked Lincoln‘s efforts at contemporary criticism, which was basically “Boo, modern US Congress!  Yay, Civil War Congress for reaching across the aisle and learning how to compromise!” then maybe you’ll enjoy the way Bridge of Spies draws parallels to our currently cloudy policies on prisoners captured in the war on terror. 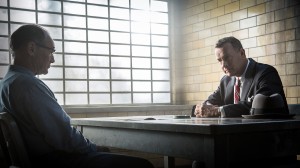 Or maybe you’ve never seen Lincoln and just want to see Tom Hanks in an old-fashioned movie.  If so, Bridge of Spies fits the bill.  I can’t say that it’s a bad movie.  I can’t say that I didn’t enjoy it.  I can say that it’s not really a spy movie nor is it the historical thriller promised by the trailers.  It’s pretty much a drama about spies with one thrilling plane crash scene and an admirably tense final act.  Ultimately, though, I prefer the Steven Spielberg who makes Jurassic Park and Catch Me If You Can, not Amistad/Lincoln/Bridge of Spies, even if I can always appreciate the craft on display and attempts to draw some kind of parallel to modern day events.  There are occasional signs of life and energy and passion for telling the story at hand in Bridge of Spies, all of which helped to hold my attention, but the result is a movie which I, with no real trace of enthusiasm, would call “perfectly fine for what it is.”

That general sentiment was beautifully argued by the four members of NPR’s podcast Pop Culture Happy Hour.  I realized upon listening to their Bridge of Spies conversation that they had perfectly summed up everything I thought about this movie.  As such, I decided to share an abridged version of their conversation:

Audie Cornish: I thought Bridge of Spies was old fashioned, in a way. I noticed a lot of reviews for it are a little bit apologetic. There’s a little strain in the reviews that are like, “Well, maybe it’s just me, but I kind of like this filmmaking.” Some of that old fashioned aspect of it was charming. Some of it was stale. All of it was carried very ably and well by Tom Hanks.

Linda Holmes: I think it’s a well-executed movie. Obviously, Steven Spielberg knows how to make movies. So does Tom Hanks. So does Janusz Kaminski, who was the cinematographer for this movie and all the Spielberg movies back to Saving Private Ryan.

Glen Weldon: This, to me, is a Thanksgiving movie, and I call it that because when you sit down at the table at Thanksgiving and you’re there with people with whom you share blood but not necessarily a whole hell of a lot else in common – they are 10, 20, 30 years older than you – you can’t talk about politics. You can’t talk about religion, and if you’re me you can’t talk about sports. You need to talk about something, and it’s ideally something that they’ve seen and liked and that’s this movie. This is the definition of mainstream. This film, apart from some things, could have been made in 1962. Everything from the stolidness of the Tom Hanks character to the fact that Amy Ryan is given nothing to do….

Audie: Well, she was playing Donna Reed, right? [They all laugh]

Linda: Amy Ryan is playing the wife of the Tom Hanks character, and that is all there is to that character.

Audie: It was a waste. She needed more to do.

Glen: When you make historical fiction you expect some contemporary sensibility to kind of leech into it. Mad Men is filled with that. You can feel Matthew Weiner commenting and poking you in the ribs when there’s a pregnant woman smoking a cigarette. The fact that Spielberg is the poster child for nostalgia, and that the Coen Brothers came in to punch up the script and they are such stylists you don’t get any of that here. For what it is, it’s well-executed. I would not call it a spy-thriller, more like a spy-tenser because it does get a little tense now and then.

Linda: I would argue that the final sequence, the part that actually takes place on the bridge of spies, is admirably tense, is well put together and is very suspenseful although by then you’ve been through a great, great deal of set-up. I do think that in terms of what you said about commenting on contemporary themes there’s clearly supposed to be a relevance to the treatment of this captured Russian spy to conversations we have now about what kinds of Constitutional protections should be available to be people suspected of terrorism. You can see parallels, but I’m not sure that the commenting on those things is interesting to me. It seems flat.

Glen: I guess what I was looking for was some kind of take, an actual point of view on these events, as opposed to just “Let’s tell the story straight.”

Stephen Thompson: It felt very much like a paint-by-numbers historical fiction movie, right down to, “The first thing the Commies take is your color palette.” So you depict Berlin in dark blues and greys and grimness. The old fashionedness of this extends beyond the subject matter, though. Tom Hanks is playing James Stewart playing James B. Donovan. It’s like an action movie but where the heroes’ weapon is his integrity. I found that a little flat.

Linda: This is the kind of movie that I find a little hard to comment on because – it’s fine, right? Everyone who makes this movie knows what they’re doing. There are certain sequences which I think are particularly nicely carried off. There’s an encounter between Tom Hanks and a group of young men after he enters Berlin that’s nicely unpredictable. I’d also like to complement the performance of Mark Rylance as the captured Russian spy. There is an effort to have some sympathy for him.  He’s just a guy, in the way that Tom Hanks is just playing a guy. They try very hard to draw some of those parallels out, but what this made me think about is my deep regret that Spielberg has retreated entirely from joy. He hasn’t made a really joyful movie since Catch Me IF You Can, which is a really terrific movie people should talk about more as being a really terrific movie.

It’s set in the same time period as Bridge of Spies and has Tom Hanks playing a very similar guy, and yet it has this mischief and joy and fun to it – Stephen talked about the color palette in Bridge of Spies being so blue and grey. The color palette in Catch Me If You Can is so much fun. It makes me sad because I know Spielberg likes to make these kinds of important movies – it’s not a new turn. It’s a turn he made back at like Schindler’s List, but I miss him making fun movies, not just totally whimsical movies but anything with any joy.

Stephen: But do they exist now, though? In my notes, I wrote, “Old fashioned. That’s its curse, and its blessing.” There aren’t a lot of movies being made like this. In a sense, there is an audience for this movie that is being underserved.

Linda: Absolutely, and the fact that this is an adult-aimed drama – that’s all wonderful. I’m happy to see a mid-budget studio movie like this. There aren’t a whole lot of those being made. This is why I’m so conflicted about it. I just felt like I was instantly going to forget everything I saw in Bridge of Spies. It’s fine. It’s good. It’s Steven Spielberg.

Glen: For everyone who calls this film “old fashioned” there’s going to be someone else who calls it “classic,” and they’re going to be sitting at my Thanksgiving table and they’ll be 60-years-old.

Linda: I was thinking about that phrase “old fashioned” as I walked out of this movie. I want that to be a description that is neither negative nor positive; it just is. However, there were plenty of times during Bridge of Spies where I realized I go to the movies to see something a little more high-energy than this. There were plenty of times where I just got bored.

My main takeaway from Bridge of Spies is that to properly get to the actual concluding bridge sequence, which is the clear highlight of the movie, there is so much which absolutely has to be established and explained, including the random way in which an American college student studying in Berlin became entangled in the whole affair.  Once all of those puzzle pieces are on the table and perfectly positioned, Spielberg, Hanks and the Coens pull it all together, but it’s a looooong walk getting there.

Here’s the most joyful part of Bridge of Spies: