“My cousin doesn’t get these kinds of questions.”

That was Kara Zor-El’s reaction to a particularly gendered question during her one-on-one interview with Cat Grant (Calista Flockhart) at the start of last night’s new episode of Supergirl. Grant, who is herself an unmarried, childless woman of industry, asked the type of question she’s probably heard many times herself, “Are you planning on starting a family?”

Supergirl had every right to find that question annoying. Flash back to when the Christopher Reeves Superman met Lois Lane on that balcony in the Richard Donner classic or when Henry Cavill’s Superman had his sit-down interrogation with Lois Lane in Man of Steel. Did his family status ever come up in either scenario? They might have discussed how his birth parents died and how he was raised on Earth, but by virtue of his gender the “So, when are you going to finally have kids?” question never entered the conversation.

This was the beginning to a Supergirl episode which was all about her need to differentiate herself from her more famous, male cousin in Metropolis, part of on-going trend with this show. Superman is an iconic part of popular culture, going back over 75 years. Supergirl has been around since the late 1950s and has a solo movie to her name, but Supergirl, the show, operates on the principle that while everyone already knows about Superman the audience needs to be educated about Supergirl. It’s partially a by-product of being on CBS and thus needing to reach a wider audience. Maybe the average CW viewer doesn’t require as much education. However, the average CBS viewer is someone like my mom who recently asked me who the heck Supergirl was. When I explained that she’s Superman’s cousin she let out an “Ohhhh” followed by a “So that’s why she has that same ‘S’ thing on her chest. Wait, since when does Superman have a cousin? Wasn’t Krypton destroyed?”

So, Supergirl’s mission across its first three episodes has been to explain all of that while also arguing quite stridently that the world is big enough for a female superhero. At times, though, it feels like the show is almost suck in its own historic significance as the first female-fronted superhero property in this modern era of superhero nirvana in film and on TV. This recent episode was about Supergirl showing her frustration and desire to chart her own path, independent of Superman, but it might as well have been the show itself telling Arrow and The Flash, “On my show, I’m the girl who saves the guy. I am NOT the damsel in distress.”

The voice-over prologue preceding every episode has Klara summarizing her life story for the viewer before proudly proclaiming, “I’m Supergirl!” The pilot had on-the-nose moments like a waitress openly proclaiming to no one in particular how inspiring it was to see a female superhero out there as a role model for her little girls and Cat Grant delivering a feminist speech on why it’s okay to say “Supergirl” instead of “Superwoman.”

The second episode dealt with actually training Kara how to fight, revealing that she has to learn how to be smarter than her opponents, not just stronger. No matter what you do, some viewers will simply not accept the visual of someone like Melissa Benoist going toe-to-toe with burly, male stuntmen, a problem I recall as far back as Buffy the Vampire Slayer when some struggled to buy the idea of Sarah Michelle Gellar routinely beating the crap out of her mostly male, almost always much bigger villains. But we live in the age of Black Widow and Ronda Rousey, and Supergirl is not afraid to have its central female badass confidently proclaim that if she can’t talk a certain male villain out of his plans then she’ll just punch him really hard until he falls down.

The third episode featured moments of Kara venting about how no one will ever be able to take her seriously if they think that whenever she gets in serious trouble Superman will simply show up to save her. How can she be the hero she wants to be if the men in her life keep trying to fight her battles for her? Jimmy Olsen calls in Superman to help because he’s a man, and it’s hard-lined in him to want to protect her. Superman shows up for the briefest of brief cameos because that’s his little cousin in danger.

By the end of the episode both Jimmy and Superman get Supergirl’s message loud and clear: Have more faith in her. The inverse of this, of course, will inevitably occur at some point down the road when she’ll probably need to learn to ask for help. After all, in the scenario in this particular episode she was, to be blunt, getting her ass kicked by the villain-of-the-week before Superman scared him away. It was with her friends’ help that she finally beat the guy later on. In the episode’s closing moments, Kara and Clark Kent (kept entirely off-screen) exchanged text messages, with Clark promising to never again interfere, complementing her on defeating a villain he never could, “I guess it was a job for Supergirl.” 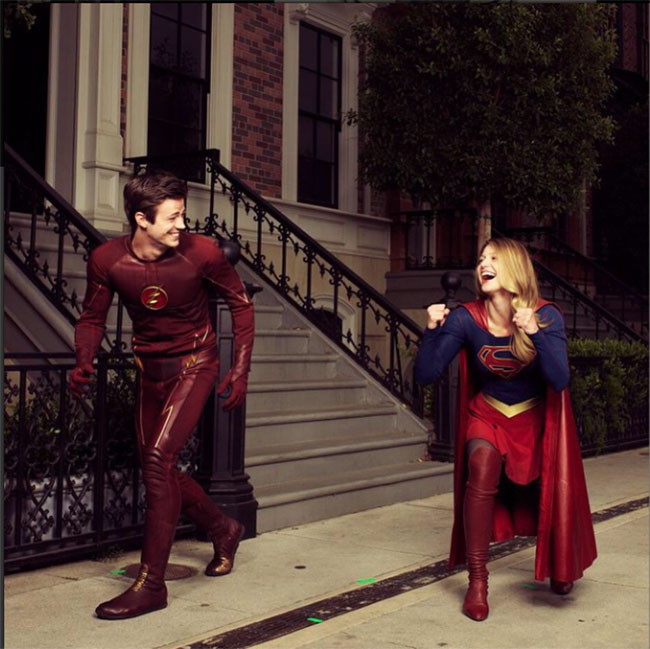 The problem I have with all of that, though, is that the first three episodes of Arrow and The Flash were allowed to simply chart the heroic progress of Oliver Queen and Barry Allen, neither show ever contorting itself to justify its own existence or spending any time pondering Oliver or Barry’s gender. It would be a disservice to ignore the significance of Kara’s gender. That’s obviously a key part of her identity, and the bullshit she has to deal with as a woman is completely different than the troubles Oliver and Barry encounter. However, I feel like we are still in the portion of the show where the writers are working hard to establish A. She’s not Superman; B. It’s totally cool that she’s not Superman because women can kick ass and get stuff done.

That’s to be expected. I am waiting to see what else this show has to say though. You can be feminist AND fun AND intelligent AND awesome. Just look at Buffy the Vampire Slayer.

Mega-producer Greg Berlanti had already co-created Arrow and The Flash when DC Television pitched him the idea of doing a Supergirl series, and he loved the challenge from a producing standpoint, telling Variety, “With what we accomplished and learned from The Flash, if we could do that on an even larger scale, on a bigger network, what would that look like?”

But, also, he understood the pressure of finally making a female-fronted property like this happen. He admitted that his nieces had been nagging him to finally make a comic book show focusing on a woman. When he pitched it to CBS Entertainment President Nina Tassler, she cried in the room. Tassler, a self-proclaimed “loud-mouthed feminist,” grew up with a Puerto Rican emigre who was active in the civil rights movement. In her several decades at CBS, she’s made a point out of employing more female executives and showrunners than just about any other network, and in the form of Kara Zor-El she saw a classic CBS leading lady. “There are themes and aspects [of Supergirl] that define the classic CBS leading lady,” Tassler told THR. “She is embracing her potential. She’s juggling a lot of responsibility. I mean, she has to save the planet, but she also has a career.”

However, even that real-world example possibly highlights how we view gender. Did Tassler’s crying in the room make her somehow less professional than her more stoic male colleagues at the other networks who wouldn’t dare show emotion like that? Or is that an asset for Tassler, proving just how passionate she was for the material and how hard she’d fight to get that show on her network? “I get a little emotional sometimes,” she told THR, recalling the day when Berlanti pitched her the Supergirl pilot. “What I loved so much was the end of the pitch, when Supergirl takes this crystal that was her mother’s [recorded] message. It was put in her pod when she was sent from Krypton. And Supergirl plays it at the time when she’s most vulnerable, and it says how much her mother loves her and to embrace who you are. It was so beautiful. It struck a chord. I cried.”

There’s also the story about the girls scouts who all dressed up as Supergirl and visited the set and got to take their picture with Melissa Benoist in costume.

And Twitter and Instagram were flooded with pictures of celebrities and adorable little kids dressed as Supergirl this Halloween. That red “S” isn’t the exclusive shield for the men of the world anymore. Go, Serena Williams. Hell yeah, you’re Supergirl. 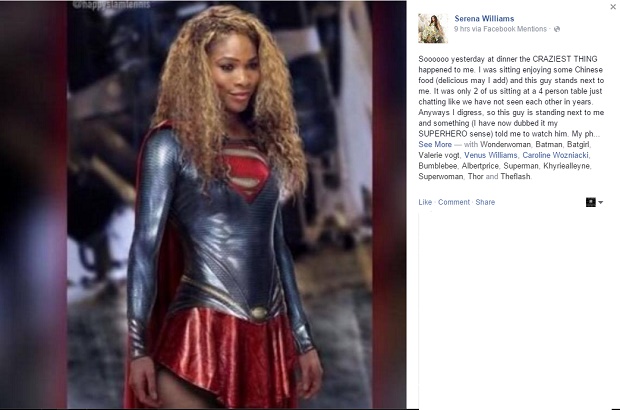 I just wish the actual Supergirl show was a little more, well, super. The wire-work fight scenes haven’t been great. The supporting cast is kind of hit-and-miss. The standard Superman problems of “no good villains,” “too powerful,” and “it’s just silly that a pair of glasses fools everyone” all apply, with Cat and potential villain Maxwell Lord seeming remarkably stupid for not noticing that Kara is obviously Supergirl (maybe there’s no way around that). The weird mix of Supergirl working with a top-secret government organization that happens to employ her sister and is led by someone who’s probably The Martian Manhunter (my own personal theory) hasn’t quite found its footing yet.  The overall mystery with Supergirl’s aunt (Lauren Benanti), who happens to be her dead mother’s twin sister, improbably making it to Earth and plotting a global takeover has come off as a bit silly, thrown at us before we’ve even had a chance to really get to known Kara and her friends.

I’ve been spoiled by Berlanti with Arrow and The Flash.  Those shows came firing out of the gate knowing exactly what they were, modeling themselves after cinematic predecessors like Batman Begins and the Richard Donner Superman.  By comparison, Supergirl feels far more like a show which is only three episodes into its run and still figuring everything out.  It knows that it’s the first female-led superhero show of the moment, and it has a lot to say about that.  It also knows that Mehcad Brooks is gorgeous.  Kara may be alien, but it’s only human to smile every time he walks by wearing one of those tight shirts.  It sure thinks that Melissa Benoist is adorable.  It’s trying to position Kara as a wayward millennial who’s finally found her calling.  It’s trying to set up love triangles, and leaning heavily on mother-daughter anguish and sisterly bonds.  It hopes we’ll find Calista Flockhart’s Devil Wears Prada-impression funny, and that we’ll stop thinking that the show is set in Metropolis and that the paper Kara works at is The Daily Planet.

That’s a lot to throw in the mix.  Not surprisingly, whatever this show is going to be – it’s not there yet.

What do you think?  Where do you stand on Supergirl at this point?  Let me know in the comments.