My 3-year-old niece is obsessed with Disney princesses. Give her a smart phone and open up YouTube and she’ll watch endless videos of people dressing up as Disney princesses, playing with Disney princess toys or singing the various famous songs from all the Disney classics. At her last birthday party, she opened not one but two different gifts which turned out to be full costumes of Elsa from Frozen, each one slightly different from the other, to go along with the one she already had on while opening the presents. Her latest thing is toys where you can you take Disney princesses out of their dresses (they apparently all wear one-piece bathing suits underneath) and put them into another famous Disney princess dress. Want to see what Ariel looks like in Belle’s yellow gown? These are the toys for you, and she’ll play with them long past the point you’d expect her to grow tired of it.

It was to my complete surprise the other night, though, when she came over dressed up as Supergirl. I have no idea where she got the costume or what exactly spurred on such a change. The characters she normally dresses up as all have beautiful gowns. Now, here she was with a red cape, a big “S” on her chest, pretending to fly around the living room, her hand straight up in the air just like Melissa Benoist on the CBS show. 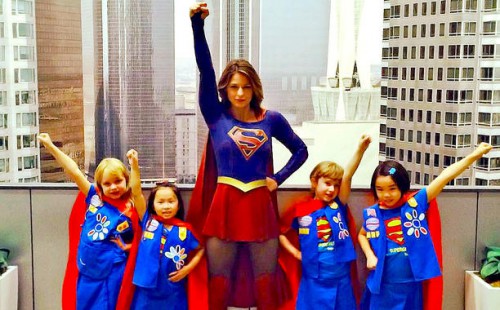 “I am Supergirl!” she proudly told me before nuzzling up next to me on the couch and asking to watch Supergirl on my tablet.

But I’m not that guy. Instead, I smiled and laughed when I saw her trying to fly around the room as Supergirl. This is the dream scenario in this era of superhero saturation. This is part of the reason the Supergirl even exists: Greg Berlanti co-created Arrow and The Flash, and his nieces let him know how annoyed they were that he hadn’t really given them a female superhero to look up to. The angsty boys get Oliver Queen, and the lanky, geeky boys get Barry Allen. Now the girls get Kara, although anyone of any gender is obviously free to like who they want (e.g., some young girls might still prefer Flash to Supergirl). My niece might remember flying around as Supergirl the same way so many modern women remember twirling around in front of their TVs while watching Wonder Woman in the 1970s, pretending to switch into their Wonder Woman costume just like Linda Carter on the show.

Whether or not Supergirl or Wonder Woman could be considered good TV is almost beside the point.

Almost, because my niece’s enthusiasm surprisingly switched right back to Disney princesses after maybe 10 minutes of watching Supergirl.  That might have nothing to do with Supergirl. She does have the attention span of a 3-years-old because, well, she is a 3-year-old. She’s also probably just a tad too young for Supergirl . Maybe I should have showed her Supergirl cartoons from Justice League Unlimited on Netflix, or maybe she’s loved Disney princesses for so long that it’s going to take a while before she loves Supergirl anywhere near as much.

There were three things that jumped out me while watching her watch Supergirl:

1. Supergirl sure does get her butt kicked a lot

I couldn’t actually show my niece a full episode of the show because I didn’t have any of them on my DVR nor were any available On Demand. CBS won’t put any episodes on Hulu because it really, really wants everyone to subscribe to its own network-specific streaming service. So, I was stuck with showing her out-of-context clips from the show which are available on YouTube, and it seemed like in every single one there was an extended sequence of Supergirl getting her butt kicked, be it by her sister while training to fight or by the villain-of-the-week. Last night’s new episode, a Thanksgiving-themed hour introducing the villainess LiveWire, was no different.

However, when I stop to think about it The Flash is the same way. Barry tracks and confronts the villain-of-the-week, loses and then re-teams with his friends to come up with a better plan before winning in a final act fight. Supergirl is following that same formula, but that didn’t necessarily translate so well to a 3-year-old, who didn’t like seeing Supergirl being demolished by a villain so thoroughly that Superman had to show up to save her.

2. Supergirl doesn’t use any of her powers beyond flight and strength all that often

Everytime Supergirl flew in the air my niece would be momentarily transfixed, smiling and most definitely believing that a woman could fly.  At one point, she told me, “I have that power too!”  Then she examined Supergirl’s outfit and pointed out all the ways in which the costume she had on was similar to and differed from the one on the show. She seemed especially dismayed that her costume had the “S” Emblem on the chest AND on the back of her cape whereas Melissa Benoist’s cape is just straight red, sans logo. However, the one thing she really wanted to see was Supergirl using all of her powers, probably because that would let her know all the things she could pretend to be able to do when she’s playing as Supergirl. Unfortunately, the show has to operate on a budget, and it’s still building up the idea that Supergirl is slowly learning to be everything she can be.   As a result, outside of flying and punching really hard there hasn’t been an amazing amount of Supergirl shooting lasers from her eyes or blowing out that freeze breathe or utilizing her X-Ray vision.  It’s not something I had paid any attention to, but my niece sure seemed disappointed.

3. The politics of the modern woman at the workplace are lost on a 3-year-old

It took a long time for my niece to realize that superheroes don’t always wear costumes. To her, Bruce Wayne wasn’t Batman. Only Batman was Batman, and you could tell because he was the guy in the Batsuit. The same goes for Iron Man and Tony Stark, and Superman and Clark Kent. The first time she watched The Flash with me she didn’t want to see Barry Allen moping about Iris West or talking with Joe at a crime scene; she wanted to see him running really fast in that red suit. This is again a reminder that she might just be too young to totally process all of this, and might be better served by superhero cartoons.

Based upon that prior experience with The Flash, I was not really surprised when she viewed scenes of Kara flirting with James Olsen or tip-toeing around Cat Grant with boredom and asked, “Where’s Supergirl?” To her, Supergirl is the one in red and blue cape and skirt. That girl with the glasses at the office is just some girl who laughs awkwardly and looks really hurt every time Cat says something mean, which is most of the time.

None of this is really meant as a criticism of the show because I won’t get much traction with, “Hey, you failed to hold my 3-year-old niece’s attention for longer than 10 minutes.”  It’s just that in the montage of life my niece dressing up as Supergirl would segue into her standing up to a mean boy in grade school and then running for Class President in high school and then graduating from college with a degree that women don’t normally go for.  She’d go on to be a real world Supergirl because of years of hard work but also because at an impressionable age she was encouraged and inspired to be more.  In that montage, I forgot the part where after she dresses up as Supergirl she watches the show and doesn’t instantly fall in love with it.  She still loves that costume, though. As she left, she again pretended to fly around the room.

I once heard someone say of Man of Steel that if you make a Superman movie that somehow doesn’t inspire the little kids of the world to play as Superman on the playground then you’ve done something wrong.  Well, Supergirl, you might beat the crap out of your protagonist, hold back on her powers and over-emphasize all the stuff with her dayjob at the newspaper, but you inspired a little girl I know to want to play as Supergirl.  On some level, you’ve done your job. Up, up and away.