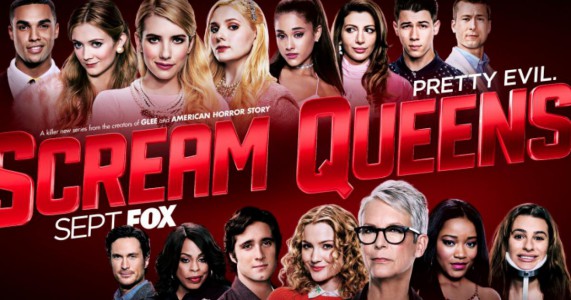 Here is what the most recent episodes of Scream Queens revealed about the murder mystery at the center of the show:

And then last night’s new episode, “Ghost Stories,” revealed Boone is not only not dead but he’s not gay.  In fact, he is the Red Devil killer who tried to seduce Zayday, and he almost definitely was the boy born in that bathtub so many years ago.  While moving around on campus, he convinces the more cartoonish characters on the show that he’s actually the ghost of Boone, but when he tries that act on Zayday and Grace they immediately ID him as one of the Red Devil killers.  He gets away and kills Zayday’s boyfriend, Earl Grey, and thinks he has talked his fellow Red Devil killer into turning on Gigi.  Instead, the still-masked third party kills him, leaving us with two Red Devils: Gigi and a mystery suspect.

All of a sudden, you look up and realize that pretty much every extraneous character at the start of the show is dead now, and with the death of the Lea Michele Chanel we’re not starting to kill off core cast members.  At this point, who’s left?

Denice – who’s appointed herself as their den mother now

Pete, Grace’s boyfriend who hasn’t been around in the most recent episodes

The incompetent police detective who’s been investigating the murders

And, in addition to all of the failed attempted killings earlier in the season, the Red Devil Killers have had an extended run of failure as of late, bested in one-on-one combat with Denice, humiliated by Dean Munsch despite having a 3-on-1 advantage over her and too distracted by a random truck driver to take down the Abigal Breslin Chanel.

Plus, through Boone’s interactions in “Ghost Stories” when he was pretending to be a ghost we can guess that Chad Radwell, Grace, Zayday and Earmuffs Chanel are not the final Red Devil Killer, or else why would they have seemed so surprised to see him?  Dean Munsch probably isn’t a candidate either, not after beating the crap out of all the Red Devils last week.  The remaining candidates would seem to be Pete, Grace’s Dad and Chanel.  That is, of course, only if we believe everything we’ve seen.  The Abigail Breslin Chanel ghost story about the Red Devil hiding in the back of her car could be total crap.  Some people we believe to be dead could have faked their deaths (not so much the various characters who had their heads cut off).  Plus, just because someone is attacked by the Red Devil doesn’t necessarily mean they aren’t a suspect anymore, as was made clear earlier in the season with Gigi staging an attack on herself.  I don’t know, though.  This late into the season, I don’t think that kind of thing is as likely anymore.  Denice getting attacked in the bathroom in “Ghost Stories” probably really was the Red Devil trying to kill her.

So, if we believe that Boone was the boy born in that bathtub, and the mystery suspect is his sister the only remaining female candidate would seem to be Chanel.  That doesn’t feel right, though.  The last killer’s identity will surely come as a surprise, and if it’s Chanel it wouldn’t be that stunning, not after what she just did to the Lea Michele Chanel.

Who do you think the last Red Devil Killer is?  Or have you bailed on this show already and don’t care anymore?  Is some of the logic I laid out above faulty?  Am I missing something?  Who do you want to see killed next?  Let me know in the comments.