Full disclosure: I have never seen Roman Holiday, The Brave One, Spartacus or Exodus. Prior to producer/star Bryan Cranston and director Jay Roach’s entertaining biopic Trumbo, I had never even heard of the man who wrote all of those films. If you had said the name “Dalton Trumbo” to me I would have possibly misheard and assumed you were telling me that Disney’s Dumbo had a first name and it was Dalton.

What I had heard of, however, was the blacklist. That feels like the type of thing every film nut becomes aware of somewhere along the way in their education. You learn about Senator Joseph McCarthy and his anti-communist ramblings. You read The Crucible and invariably write essays about how Arthur Miller’s use of the Salem Witch Trials was meant to be an allegory for McCarthiasm. You watch On the Waterfront and High Noon and notice how many classic films of that era boiled down to solitary heroes standing up for what’s right, usually because they were being written/directed by people who had been called upon by the House Un-American Activities Committee (HUAC) to name names.

Well, Dalton Trumbo is the man who more or less helped create the blacklist. He was a charter member of the so-called Hollywood Ten, a group of screenwriters who planned to openly question the legitimacy of HUAC instead of naming names and take their case all the way to the Supreme Court where the HUAC investigations would be declared unconstontinutional. That didn’t happen, and the Hollywood Ten went to jail. The controversy caused every major film studio to officially blacklist the Hollywood Ten and any other filmmakers identified as communists by HUAC.

Dalton Trumbo is also the man who eventually broke the blacklist, and the story of how that happened borders on the absurd, in a, “No, seriously, we can’t make this shit up” kind of way.

Trumbo is a different beast than prior movies about the blacklist, such as The Majestic and The Way We Were. This is not really the standard Hollywood blacklist story of one man who triumphantly stood up to the system and did or did not get the girl. Instead, this is the story of a man who worked around the system and persevered for an entire decade, but was so doggedly determined along the way that he endlessly irritated the heck out of his family and, at times, became more driven by ego than principle, to the point that only his absolute closest friends could call him on it.

It starts off in the calm before the storm in late 40s Hollywood, with Trumbo an already-established hotshot screenwriter with a gorgeous wife (Diane Lane), two daughters and a son. His best friend appears to be the actor Edward G. Robinson (Michael Stuhlbarg), who teases him on the set of one of their movies for trying to sneak in some kind of political commentary into what’s meant to be a gangster picture. The director on the film is less forgiving and clearly holds great personal disdain for Trumbo’s left-leaning views, but Trumbo’s movies keep making money meaning they’re stuck with him. MGM is about to make him the highest-paid writer in Hollywood history, yet he can’t stop himself from getting into political arguments at glitzy parties, unwilling to back down from those who say he was wrong to help unionize the below the line workers in the film industry, a historical event we see mere glimpses of in newsreels.

Cranston’s Trumbo comes off somewhat like that one uncle (or extended family member) everyone knows not to talk politics with at the holidays. He’s highly intelligent, speaking with the same wit and grace he brings to the printed page, yet if the carrot of a worthy political argument is dangled in front of him he can’t resist reaching for it. His passion easily trips over into self-righteousness, and he oddly speaks with the cadences, pauses and affectations of a typical movie actor of the period, more so than some of the actual movie actors he knows, like Robinson. He’s also a loving father, as nicely established in a scene where he uses a lunch room analogy to answer his young daughter’s question of whether or not he’s a communist and what exactly communism even means. 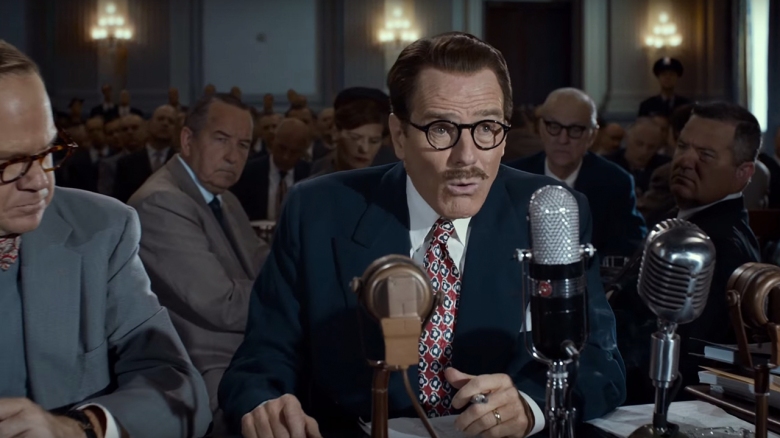 The general trajectory of the rest of the first act of the movie is to chart the way the HUAC’s investigation into communist activities in Hollywood began as a source of ridicule and derision before emerging as a life-ruining behemoth, aided immensely by mere happenstance (the liberal Supreme Court Justice who would have been the swing vote against HUAC unexpectedly died) and influential industry support (as embodied by David James Elliott’s spot-on version of John Wayne and Helen Mirren’s conniving gossip journalist Hedda Hopper). Cranston’s perfectly plays Trumbo’s creeping realization/dread that his plan to defy HUAC is backfiring spectacularly.

As a piece of film history, this section of the story is reliably well-made, perfectly in keeping with director Jay Roach’s capable work with the HBO political movies Recount and Game Change. However, apart from a truly memorable and surprisingly funny stand-off between Trumbo and Wayne this portion of the story feels like it’s been whipped through to get to the truly fun stuff: What did Trumbo do after he stood up to HUAC and lost?

It seems strange that I would describe this next section of the story as the “truly fun stuff.” After all, this is when Trumbo goes to prison, and eventually gets out only to discover how few true friends he really had. This is when Hedda Hopper lords him over any chance she gets, like a hunter posing for pictures with her slain prey.

However, that same energy and fun Argo had with its depiction of B-movie Hollywood, with Alan Arkin and John Goodman roaming the backlots and setting up fake table reads for their fake sci-fi script, is the same exact energy Trumbo has as we watch the beleaguered screenwriter talk his way into writing under pseudonyms at a low-rent movie studio. The producer at the studio, Frank King, is even played by John Goodman, and the fellow blacklisted writers Trumbo recruits into his operation are played by actors (e.g., Alan Tudyk, Louis C.K.) who know their way around a one-liner

It’s here that Roach and Cranston’s background in comedy, Meet the Parents/Austin Powers for the former, Seinfeld/Malcolm in the Middle for the latter, shines through. The utter absurdity of the situation, e.g., everyone seemed to know what was going on, but they couldn’t prove it, demands a light tough.

A film like this can so easily turn into an info-dump, e.g., “Then this happened, then this happened, then this happened.”  To some degree, Trumbo can’t get around that trap, occasionally falling into, “And then he wrote this movie, then this movie, then this movie.”  However, it’s to the film’s immense credit that it not only makes these portions of the story feel lively it also frequently pauses to help us understand the toil the entire ordeal is exacting upon all involved parties, be it a fellow screenwriter not cut out for the long haul of working around the blacklist, the shame felt by former friends who named names or the ever-increasing turmoil in the Trumbo household since he effectively turned his kids into production assistants running scripts all around town. There is certainly more effort here to acknowledge the collateral damage within Dalton’s family than there is with James B. Donovan’s (Tom Hanks) family in Steven Spielberg’s similarly themed A Bridge of Spies, although only Trumbo’s eldest daughter gets any kind of arc.  Moreover, even though Trumbo is the ostensible hero the film does not pretend that he was a saint, e.g., pointing out the seeming contradiction of his simultaneous embrace of communism and capitalism.

While promoting Trumbo, Cranston has developed the same exact spiel when asked to explain the set-up of the movie. Every single time, he provides a nearly identical summation of the blacklist, HUAC and how Dalton Trumbo fit into the story. It can come off sounding like a slightly boring history lesson. However, the delightful surprise of Trumbo is that, regardless of whether or not it lives up to its awards season bonafides, it is far from boring. It is a worthy story told with measured comedy and drama. It is not a particularly subtle movie, of course, and at times Cranston’s pontificating does seem like the work of an actor in a role meant to win him awards. As per a line in the movie, Trumbo might ultimately lack the genius of the actual Dalton Trumbo, but Cranston, Roach and company do his story justice.

It has been a long, long time since I have seen one person smoke as much in a single film as Bryan Cranston does in Trumbo.