The Night Before is a Christmas movie about Christmas movies.  It’s also Seth Rogen’s latest ode to the enduring power of male friendship despite the roadblocks you encounter as you grow older.  It’s also a stoner comedy.  It’s also one long joke about what it’s like to be Jewish on Christmas eve.  It’s all of those things, really, but with the story being torn in so many different directions The Night Before doesn’t entirely hold together.  To be fair, in the limited pantheon of raunchy Christmas comedies The Night Before does take itself more seriously than something like A Very Harold & Kumar 3D Christmas, and there are laughs to be had, as long as you are a fan of Rogen’s distinct brand of comedy.  If not, seriously, don’t see this movie.

We begin with Tracy Morgan, of all people, providing storybook-like narration, forcing rhymes left and right as he sets up the premise of the film.  In 2001, Ethan (Joseph Gordon-Levitt) lost both of his parents around Christmas, and to help him through the grieving process on Christmas eve his two best friends, Isaac (Seth Rogen) and Chris (Anthony Mackie), took him for a night on the town in New York City, thus beginning an annual tradition.  Every Christmas eve, they recreate that same night on the town (wear ugly Christmas sweaters, see the tree in Rockefeller Center, go to the same Chinese restaurant, karaoke bar, etc.).  Somewhere along the way they caught wind of a near-mythic secret party called The Nutcracker’s Ball, where the drugs are plentiful and you’re guaranteed to get laid.  It has been their quest to find that party, but as the years passed Isaac and Chris grew up.  The former got married (and his wife is pregnant now), and the latter saw his professional sports career take off.  They’re ready to end the tradition, but, almost Willy Wonka style, Ethan finds three tickets to The Nutcracker’s Ball on the eve of their final Christmas eve together.

As premises go, “one last crazy night on the town” is a good starting point, and it re-teams Gordon-Levitt and Rogen with their 50/50 director Jonathan Levine.  Anthony Mackie, who seems to be overflowing with charisma, is an interesting addition to the mix.  The film is aware that a jock like Chris wouldn’t typically be friends with guys like Isaac and Ethan, and that ultimately pays off in a nice mid-movie “Do you remember how we all became friends?” conversation.  Gordon-Levitt, Rogen and Mackie all have an easygoing chemistry together as well as a lived-in quality to their friendship, suggesting a long, emotionally complicated history.

Male friendship is oddly Seth Rogen’s specialty.  The Night Before could almost be the story of what the guys from Superbad (a movie based on Rogen’s real-life friendship with his co-writer Evan Goldberg) would look like if they kept trying to get together to party one time a year, unable to admit they were too busy to keep it up any longer.  Hijinks would ensue.  Drugs would be consumed, and the guys would ultimately remember, “I love you, man.”

However, is it time for Rogen to find a new story to tell?  From Knocked Up to Superbad to This Is the End to The Night Before, you see a pattern of a writer-actor who is continually drawn to stories of friends being torn apart and/or guys resisting the next stage of life, be it college or parenthood.  To be fair, he doesn’t always co-write his own movies.  For example, he’s not among the credited screenwriters for 50/50, Neighbors or The Night Before.  However, his filmography often reads like “Seth Rogen realized how much it sucks to go to a different college than your best friend from high school” (Superbad) or “Seth Rogen realized how easy it is to drift apart from best friends as you get older” (This is the End) or “Seth Rogen realized how daunting it is to be a new parent because that means you are now officially an adult” (Neighbors).  That places Night Before squarely in the pantheon of Rogen projects, but it almost feels too familiar.

I say that, and yet that’s the part of The Night Before which arguably works the best.  The general idea is that all three of the guys are dealing with their own drama which they aren’t owning up to, e.g., Isaac is terrified to become a father, Chris is boosting his career through steroids (as revealed in the film’s first 5 minutes) and Ethan has been using the tragic death of his parents as an excuse to never truly grow up.  As the night begins, Isaac and Chris agree they are finally going to confront Ethan about how their annual traditional has unintentionally enabled his inability to move on, but before the night is over they’ll all have to deal with their own shit.

In balance, Chris’ part of the story feels a tad undercooked, kind of like the type of thing the four white guys who wrote the script figure a black athlete would be going through.  Mackie makes the most of it, though.  Elsewhere, Joseph Gordon-Levitt can pretty much play “Guy who needs to mature and grow up” in his sleep [see: (500) Days of Summer, Don Jon], and Rogen, well, to be honest Rogen’s character is high on some drug or another throughout almost the entire run of this movie.  There are several moments where his drug trips provide insight into his pre-baby anxities, but for the most part he’s the comic relief, all funny facial expressions, hallucinations and imagined conversations. 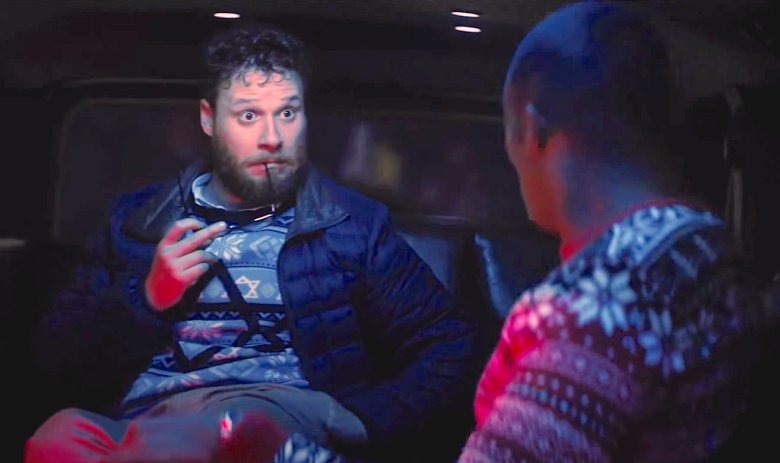 All of that is roughly what I expected based on the trailer.  What I didn’t expect is the way The Night Before uses other classic Christmas movies to paint around the edges of its own story.  Ilana Glazer is a crazy hippie girl who decides to teach Chris a lesson, but the film also uses her as its version of both The Grinch and the sticky bandits from Home Alone.  Michael Shannon’s oddly intense pot dealer is potentially supernatural, serving as an unexpected stand-in for the ghosts of Christmas past/present/future from A Christmas Carol.  There’s even an extended homage to The Polar Express, and a hate-it-or-love-it callback to Macaulay Culkin’s most famous Home Alone moment.

Seth Rogen and his friends have grafted their brand of guy humor and male bonding drama to specific genres before, be it the drug-deal-gone-bad (Pineapple Express) or disaster/apocalypse story (This is the End).  This same formula has been applied to the Christmas movie with The Night Before, and it actually works better than it should.  I just don’t know how necessary it actually was to the story.  Three guys having a night on the town on Christmas Eve was all the Christmas movie I needed from The Night Before.  That being said, there is a cleverness to their updating of A Christmas Carol, specifically the way Chris is the one concerned about the present, Ethan’s clearly stuck in the past and Isaac is terrified of the future. 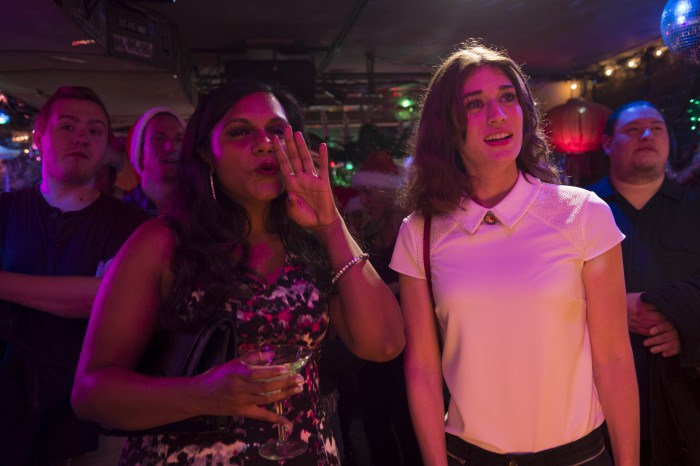 I should point out that there are some really funny women in this movie too, not that any of them are the focus.  Beyond Ilana Glazer basically playing her character from Broad City, Lizzy Caplan is around as Ethan’s “one that got away.”  Mindy Kaling is the mutual friend who becomes entangled in Isaac’s side of the story.  Jillian Bell is Isaac’s pregnant wife who gives him a box of drugs for Christmas.  Bell is such a great comedic partner to Rogen that a mid-movie sequence involving the two of them attending a midnight mass together even though he’s Jewish and high out of his mind feels so wedged into the movie out of nowhere (they just happen to run into each other) that you suspect the writers were simply trying to give Bell more to do.

The emotions in A Night Before, however predictable and overly familiar if you’ve ever seen a Seth Rogen movie, worked for me.  The laughs, on the other hand, well, not to be a Grinch, but I didn’t laugh nearly as much during this movie as I was probably supposed to.  The whole thing is far too uneven to consistently amuse.  Ultimately, BBC film critic Mark Kermode has a rule for comedies: If it makes you laugh at least five times, it’s done it’s job.  For me, The Night Before passes the test, but juuuuust barely.

SlashFilm visited the set, where Rogen told them, “I think at first we were shying away from [Christmas movies] a little bit and not fully embracing, like it’s a fucking Christmas movie.”  However, they eventually leaned into those tropes, with Mackie admitting, “We definitely went full Christmas.”  I think Rogen would have been better off trusting his initial instincts.