Maybe this is an indication that I have an alarmingly shortening attention span, but when I look back at the films of 2015 I gravitate toward individual scenes and moments.  For example, Spy probably isn’t one of the best movies of the year, but I remember how hard I laughed when Melissa McCarthy tossed that bad guy over the second floor railing and then found the sight of his dead body so unnerving she projectile vomited straight onto it.  Sometimes a film will be full of those kinds of scenes which completely connect with you or simply make you laugh.  Other times those wonderful moments will be in scarce supply and the movie won’t necessarily add up to much.  But, hey, you’ll always have the one thrilling action scene, good laugh or ingenious scare.

Or maybe I’m just stalling right now because, sadly, I can’t really do a proper “Best Movies of 2015” list since (for a variety of reasons) I’ve yet to see Mad Max: Fury Road, Straight Outta Compton, Spotlight, Steve Jobs, Spectre, Carol, The Danish Girl, The Hateful Eight, The Revenant, Concussion and Room.  For the year, I get a big fat “incomplete,” but among the 2015 movies I have seen these are 4 of the moments which stuck with me:

I wanted to love Kingsman: The Secret Service, Matthew Vaughn’s spy genre spoof, but there is a sophomoric tone and quality to the humor which I found off-putting, and the moment Colin Firth died is when the thing which was anchoring me to the story floated away.  It happens over halfway into the movie immediately after Firth’s proper British gentlemen who just so happens to be a deadly spy is manipulated by Samuel L. Jackson’s rage device to demolish all the mind-controlled parishioners in a hate group church in Kentucky.  It is the second sequence in the film to play the “Look!  It’s Colin Firth, Mr. Jane Austin, kicking some serious arse!” card, and while the novelty is not as fresh the second time around the ingenuity of the film-making is undeniable. According to ComicBookMovie, the scene was shot over 7 days, and featured around 130 actors, including 20 stunt men, 30 special actors and 70-80 extras.  It’s all done to appear as if it’s one continuous shot, with the camera getting into places we wouldn’t normally see in a fight scene:

Although I walked away from Kingsman ultimately concluding “That movie wasn’t really meant for me” I couldn’t deny the following: that scene in the church was pretty remarkable.

The Moment: Let them fight

Jurassic World is a dumb movie in ways the original Jurassic Park wasn’t.  Simply put, if Jurassic Park was Steven Spielberg again doing the Jaws thing and making a B-movie which felt like a prestige picture with classic characters and interesting ideas Jurassic World is content with just being a B-movie with some fairly cheesy characters, goofy ideas and fun action sequences.

And I’m kind of okay with that.  If you are willing to tune into the frequency this movie is broadcasting on there are some purely joyous moments, some of which are made even more enjoyable by how knowingly stupid they are.  For example, it’s hard not to laugh at least a little bit when the velociraptor they call Blue runs around a corner and comes in to save the T-Rex from the I-Rex like the cavalry coming to save John Wayne in Stagecoach.  You realize in that moment that director Colin Trevorrow is having the time of his life staging this climactic battle like something out of a western, with I-Rex as the new gun in town, the T-Rex as the grizzled gunslinger and Blue as the calvary.  To be honest, I don’t really know where the aquatic dinosaur fits into that metaphor, but the moment it pops out of the water to unleash holy hell on the I-Rex is pure monster movie madness, like something out of Godzilla.

The human characters might be lacking, the storyline half-backed, but man o man when that one dinosaur does that horrible thing out of nowhere to that other dinosaur it’s pure spectacle filmmaking.  It’s almost like the two monsters – T-Rex, velociraptors – from the first Jurassic Park gathered together to pass judgement on the I-Rex (and by extension Jurassic World) and declared, “You are not worthy!” and called upon their executioner to take care of it.

The Moment: Take Her to the Moon for Me.

Inside Out director and co-writer Peter Docter used to watch his daughter and wonder what the heck was going on in her head, especially when she turned 11 and stopped being the little girl he’d always known.  As he told ScreenRant, “I really value the sort of goofy, funny play on the ground with dolls and stuff. That’s gone away. That’s not going to be a part of my life anymore. So, Inside Out is kind of told from a parent’s point of view, Joy being this surrogate parent. Trying to figure out what’s going on in our kids’ heads is what led to this movie.”

To visualize the concept that the little girl in the movie, Riley, is getting regrettable and inevitably older, Docter utilized several tricks.  For example, at one point an island inside her mind representing the goofy part of her personality crumbles.  However, there is no better realization of the central idea than when Riley’s invisible friend, Bing-Bong, who’d been hiding in her subconscious for years, literally disappears in front of our eyes as part of a gallant self-sacrifice to allow Joy to get back to headquarters.  Before he goes for good, he makes Joy promise to take Riley to the moon for him, which was always their destination when Riley would play with him and pretend a radio flyer wagon was a rocket launcher to the moon.

In a way, this moment mines similar emotional territory as the ending of Toy Story 3, sadly reflecting upon universally relatable, transitional moments of adolescence, but in that case at least the lost innocence could be passed to future generations in the form of hand-me down toys.  In Inside Out, Bing Bong, as so memorably voiced by Richard Kind, is simply gone forever, a silly childhood artifact discarded in a sea of lost memories.  But he went out wishing her to the moon, breaking our hearts in the process. 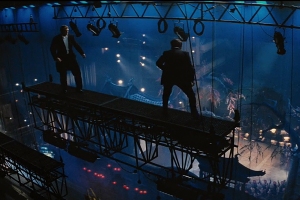 The Moment: The Vienna Opera House

After Mission Impossible: Rogue Nation put the big moment from its trailers, i.e., Tom Cruise attached to the side of an ascending airplane, right in its opening scene it was easy to wonder what could ever top that.  However, that is merely the first course in what, if I’m sticking with this food analogy, is at least a four course meal of amazingly intricate action scenes.  Tom Cruise and director Christopher McQuarrie clearly wanted to set the new standard for the franchise, and any future botched assassination will have to measure itself against the Vienna Opera House sequence.

It occurs halfway through the film, beginning as a standard Mission Impossible scenario involving Ethan Hunt and his one remaining ally attempting to thwart an assassination attempt only to realize that there are three different assassins on scene and they’re not all aiming at the same person.  You’re right along with Ethan has he gives his best “WTF?” reaction to the unfolding complications and absolute nail-biting tension.

The kicker of it all might be that there’s not one, not two, but three different innocuous, custom-made guns in the scene, one per assassin.  There’s a flute gun, nightstick gun and a pipe gun.  As McQuarrie told MovieFone, “We knew we wanted someone from the orchestra, so that’s where the flute came from. And I knew I wanted a cop, that was the easiest way to get into the opera sequence. And Ilsa, I loved the idea that this woman in a beautiful, elegant dress was backstage with all this, this “gack,” and we wanted to juxtapose her dress with her environment. So that gave me the idea of a gun hidden in a scaffold. And originally it was just hidden inside the pipes, so Simon Afforte, our armorer, had the idea that the weapon should be in the pipes itself. That the pipe was actually a massive silencer on the front of his gun, which I loved.”

Come back tomorrow for 4 More Amazing Movie Moments of 2015.