The Plot (Specific to This Video): After Penny falls down a flight of stairs, she ends up in a body cast, forced to rely on Max for help while she recovers.  However, after meeting her hot, gay physical therapist (Matthew Del Negro) Max actually prolongs Penny’s recovery in the hopes of getting closer to his new crush.  His ultimate plan is to push Penny out of the way and convince the therapist to give him a massage under the pretense that Penny isn’t available that day.

He finally makes his move by lacing Penny’s overdosed “sleepy tea” with pills he calls “nature’s Ambien.”  As she slips into unconsciousness, Penny realizes exactly what’s happening and accuses Max of “misery-ing” her, crying out in a deeply tired voice, “You’re a monster.” Upon waking up, Penny attempts to escape from her room, but can’t, what with the body cast and everything.  She does eventually get out, resulting in this confrontation:

Commentary: Happy Endings was a perennial bubble show at roughly the same time as Community.  A year after NBC yanked Community around on its schedule and took it off the air with no promise of a return ABC did roughly the same thing with Happy Endings  before burning it off with a run of back-to-back episodes on Friday nights.  The interesting thing was to see how fans reacted.

Community fans organized fan-made art shows, produced short documentaries  and turned #SixSeasonsAndAMovie into an actual thing.  They took ownership of the show, and did everything they could to convince NBC to keep Community around. Happy Endings fans…um, didn’t do any of that, at least not in anywhere near the same numbers.

The reason why, I recall seeing argued on Pajiba.com at the time, was that Community had an audience surrogate figure (Abed) and a reputation for ingenious pop culture parodies.  There was something deeply personal about rallying around a show which featured a character like Abed who similarly rallied around his own favorite show, NBC’s The Cape.  Community‘s characters arcs may have largely stalled around season 2, and Jeff, Britta and the gang were quite often truly terrible people or, if not outright terrible, remarkably mean-spirited, not the type whose lives inspire much audience investment.  However, we could see ourselves in Abed, and we were forever looking forward to whichever genre or specific film or TV show Dan Harmon would deconstruct next 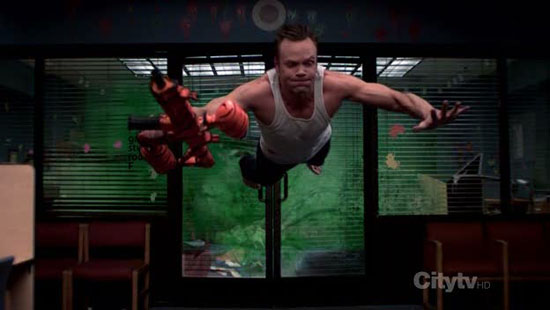 Happy Endings, on the other hand, didn’t have nearly as much to distract us from its real mean-streak.  Episodes would regularly feature cold opens which descended into everyone in the gang literally laughing at someone else, usually Max or Penny.  Jane, for example, had a habit of laughingly telling Penny she was a stupid bitch. The cold open in “Cazsh Dummy Spillionaires” actually has everyone in the group laughing in Penny’s face as they watch and re-watch the video of her falling down the stairs, only relenting when she protests, “Guys, not cool. I died for 2 minutes in the ambulance.”

It’s not like the show didn’t have some heart, though.  Similar to Community, Happy Endings would go through the typical sitcom motions and end episodes with emotional speeches, usually involving Brad and Jane getting over their issue of the week or Dave and Alex feeling out their on-going romantic tension.  Plus, I’d argue its characters actually liked each other far more than the shouting-match prone group on Community did.

Still, I remember watching the scene where Max drugs Penny in this episode and thinking, “This is one of the most important episodes in the show’s history, its first episode on its new night going up against New Girl, and if anyone is sampling it for the first time they just watched a man literally drug his best friend just so he could have sex with her trainer.”  Of course, I was also laughing out loud at the same time.

That type of thing is cool now.  Entire shows are now built around the marketable premise of “These people seem like monsters,” e.g., Hulu’s Difficult People.  That’s pretty much FX’s entire comedy brand, although You’re The Worst evolved into a far deeper show than anticipated.  However, back then what was there in Happy Endings to rally around?  It was a bunch of white people and one black guy telling a thousand jokes per minute, often times openly mocking each other. The fact that Max and Brad were very different kinds of sitcom characters, an anti-Will & Grace gay man and a proudly effeminate black man, just didn’t have the same cache as “OMG, did you see Community‘s zombie episode?”  Community was a sitcom about sitcoms and pop culture; Happy Endings was just a sitcom, albeit a hilarious one.

Even with its occasional Misery-like storyline, Happy Endings wasn’t a show which was ever going to do an entire bottle episode about a lost pen or turn a botched biology class experiment into a full-blown Law & Order homage.  No, Happy Endings was a hangout sitcom with a great cast and a killer writing staff, but shows like that get unjustly canceled all the time.  That’s not to say that there weren’t efforts to save the show, or that co-creators and co-showrunners David Caspe and Jonathan Groff haven’t taken the occasional meeting in the years since then at a network interested in some kind of revival.  It’s just that, obviously, nothing has come of that yet.  Community, on the other hand, came back for an improbable sixth season, and then performed so poorly it more or less killed its new network (not that it’s actually as simple as that).

That kind of thing can’t be good for the chances of a Happy Endings revival.  Now that it’s up on Hulu, it can at least be enjoyed by an entirely new audience.

Fun facts: Community and Happy Endings each had episodes directed by Joe and Anthony Russo, who now make Captain America and Avengers movies for Marvel.  Plus, the shows shared the same composer (Ludwig Goransson, who just did the score for Creed) and production company (Sony Pictures TV).