To hype its new Evil Kenevil documentary Being Kenevil, Hulu recently ran a huge image of the daredevil legend on its homepage. They paired it with an image of Lee Majors’ barely-smirking 1980s face in a scene from a TV show called The Fall Guy.

The Fall Guy? What the hell is that?

Well, it ran on ABC from 1981 to 1986, and according to The AV Club, “It concerns a stuntman (Lee Majors) who moonlights as a bounty hunter, catching criminals using his conveniently applicable stuntman tricks and by just sort of driving around for a while, until he inevitably runs them over.”

Huh. As a pop culture obsessive, I arrogantly assumed The Fall Guy must have been a one season wonder because why else hadn’t I heard of it before? After all, even though I’ve never actually seen an episode of Lee Majors’ best-known series The Six Million Dollar Man I’ve at least heard of it. Surely if The Fall Guy was anywhere near as significant it would have popped up on my pop culture radar at some point.

Turns out, The Fall Guy ran for just as long as Six Million Dollar Man (five seasons each), but ended its run with a higher episode total (113 vs. 106). That’s not that surprising. Fall Guy was a Glen Larson show, which either means nothing or absolutely everything to you depending on your age. Larson’s the legendary TV producer responsible for Alias Smith and Jones, McCloud, Battlestar Galactica, Buck Rogers in the 25th Century, B. J. and the Bear, Quincy, M.E., Magnum P.I., The Greatest American Hero and Knight Rider. He’s also the producer often accused of stealing his ideas from movies and other TV shows, but whatever he put his name on tended to adhere to the same familiar formula guaranteeing a syndication-qualifying run. Back then, saying “It’s a Glen Larson show” was akin to saying “It’s a Dick Wolf show” now – the mere mention of the name gives the impression you know what to expect.

Well nuts to that because as I curiously watched Fall Guy‘s two-part pilot I had no idea what the heck was going on. Did they really used to make TV shows like this? There’s a prologue sequence (similar to what every CW show currently does) in which a rather folksy Lee Majors voice-over (in character as stuntman-turned-part-time-bounty-hunter Colt Seavers) explains the basic premise of the show before informing us that he’s closing in on his latest bounty, a master of disguise who has evaded capture multiple times.

Sure. That’s to be expected and a rather helpful start to things.

As the voice-over ends, we watch a nurse tend to a poor man with a gauze-covered head and leg cast, and then … well, then the show gets awesome because Lee Majors enters the room, claiming to be a family friend, and a fight immediately breaks out.

The nurse runs for help, as Majors both throws and receives punches from the target of his abuse. After you give it a minute you hear Majors explain he’s actually there to bring in the master of disguise he referenced in the voice over, who’s clearly faking his head and leg injury. Majors pummels and eventually knocks him out as a nurse and orderly standby, begging him to stop.

Holy crap! Will The Fall Guy be a show where Lee Majors routinely goes all Roadhouse on people? 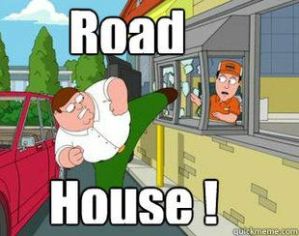 Then Majors hands his bounty off to his female boss, claiming he has to get to a fire.

Cue title card and quick opening credits over stock footage of an F1 car race. Wait. It’s actually a scene from a movie which ends with one of the cars crashing and catching fire. Oh, of course, that’s the fire Majors was referring to, clearly needing to get back to his day job as a stuntman.

He emerges from the car unharmed, quick to deflect praise from the director with a modest, “It felt pretty good. Thought I’d died and gone to hell.”

A couple of minutes later, James Coburn has put in a cameo as himself, Heather Thomas has claimed her instant sex symbol status as a young stuntwoman and Majors has punched a young stuntman-in-training straight out of his trailer for gleefully promising to someday replace him.

Then the theme song happens. Oh, the song, actually performed by Lee Majors, doing his best country singer spin on continually name-dropping popular starlets of the era and lamenting how they all ended with the lead male stars because no one pays attention to the unknown stuntman:

Sure, by the time that comes in the pilot there’s already been 7 minutes of action, a voice-over prologue, and a traditional opening credits sequence. Why should that stop them? In fact, they love their theme song so much it plays in full at least two more times throughout the pilot, which ends with a police car chase across the border and a casually racist group of black characters airlifted by helicopter and left for dead on top of a completely isolated mountain range accessible only by helicopter. It’s okay, though, because they were bad guys, and Lee Majors got the best of them using his completely convenient knowledge of Hollywood stunts.

I can’t really speak to the rest of the series as I have only seen the first three episodes at this point, each of them perfectly reliable formulaic bounty-of-the-week episodes with plenty of inside Hollywood jokes (like a director whose ignorance about a stunt would have resulted in Heather Thomas’ broken neck). At times, it feels like an action movie version of The Rockford Files, and other times like a TV show I should have always had in my life but never did. My enjoyment of it might be from a slightly ironic, detached point of view, but it is a pretty thorough enjoyment nonetheless.

What about you? Is this a thing you’d ever heard of before?