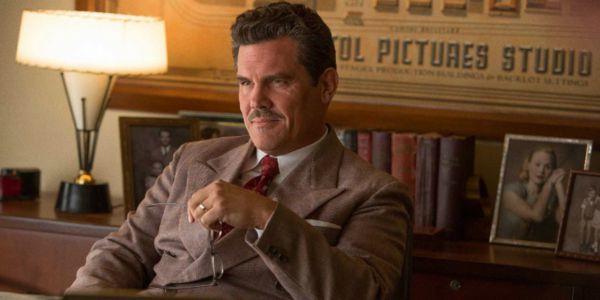 My standard reaction to a Coen Brothers movie is to sit in bemused silence during the closing credits, thinking to myself, “What the hell did I just see?” Then I take a day or two to unpack everything and reach my conclusions.

Yesterday afternoon, the older couple sitting behind me at Hail, Caesar! didn’t have any patience for all of that film nerd pondering. They offered their verdict immediately, or at least the guy did. After his wife asked what he thought of the film, he lamented, “Well, I thought it’d be different than that.” When prompted to clarify, he quickly added, “I thought it’d be funny,” before pausing to look up at the names of all the movie stars (George Clooney, Josh Brolin, Channing Tatum, Scarlet Johansson, Jonah Hill) rolling by in the credits, “All of that talent, and from the guys that made O Brother, Where Art Thou?, and this is the best they came up with? I don’t know. I guess they have a different agenda this time.”

Another pull-quote for the movie poster – “This is the best they came up with?” says one anonymous old man!

Of course, if that old man came to Hail, Caesar! expecting another O Brother, Where Art Thou? he was always going to be disappointed. That version of the Coen Bros. might not exist anymore. As of late, they’ve been given to somber reflection (A Serious Man, Insde Llewyn Davis). Their occasional comedies, usually featuring George Clooney playing an idiot (Intolerable Cruelty, Burn After Reading), have been uneven, pitch black affairs. Hail, Caesar! feels like the work of directors trying to find their way back to being lighthearted and silly but getting lost in the allure of pastiche, stoked to do their own meticulous versions of a Stanley Donen musical, a Biblical Epic and a singing cowboy movie.

The plot revolves around a kidnapping, a Coens specialty after Raising Arizona, Fargo and The Big Lebowski. This time, the kidnapping transpires during a day in the life of Eddie Mannix (a purposefully stoic Josh Brolin), a Hollywood fixer for Capital Pictures in the 1950s. His job is solve problems, be they logistical (e.g., a second unit crew in New Mexico hasn’t filmed anything in 4 days due to torrential downpour) or scandalous (e.g., a surprise pregnancy for one of the unmarried contract girls) in nature. On top of that, he controls the budgets for all of the films, and provides progress reports and box office updates to the New York-based head of the studio.

When the star (George Clooney doing his always amusing dim-witted idiot shtick) of Capital’s biggest movie of the year (the Ben Hur-like Hail, Caesar!: A Tale of the Christ) is kidnapped a mere day before he’s due to shoot the film’s climactic speech, Mannix has to come up with the requested ransom money all while keeping the news out of the gossip rags (represented by Tilda Swinton as twin sister rival gossip columnists), putting out any other fires which might erupt and weighing a potential career change. 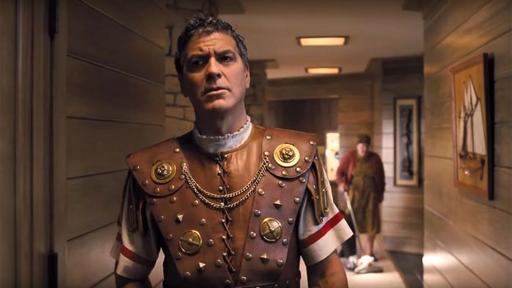 In translation, this means a lot of Mannix walking from one Hollywood soundstage to another so that the Coens can cue up their tongue-in-cheek recreations of classic Hollywood movies. It gives Hail, Caesar! the feel of a series of one-joke vignettes – Old musicals sure were homoerotic! Bathing beauties were usually anything but innocent! Some actors were best seen, not heard!

The jokes, carried mostly by stars appearing in glorified cameos, are hit and miss. The clear standout in the bunch is the sequence when Alden Ehrenreich’s lovable singing cowboy star is recast into a drawing room drama he has no business being in. His inability to deliver a single line of dialogue (“Would that it were so simple”) to his increasingly frustrated director’s (Ralph Feinnes) satisfaction is an endless delight, both in concept and in the superior performances from Ehrenreich and Feinnes.

It should be noted that there really was an Eddie Mannix, and he really was a Hollywood fixer, for MGM for four decades beginning in the 1920s. The version Josh Brolin plays is entirely fictional beyond his name and occupation. Similarly, though their characters are fictional there are obvious era-specific models for the characters played by Johansson (mostly resembles Esther Williams), Clooney (like Cary Grant combined with Clark Gable), Swinton (clearly Hedda Hopper), Tatum (probably Gene Kelly), Feinnes (George Cukor even though Cukor wasn’t British) and Ehrenreich (Roy Rogers mixed with Gene Autry).

However, the Coens dismissed a Variety question about how much of a connection we’re really supposed to make, “Is Scarlett Johansson Esther Williams? Not really. We don’t know anything about Esther Williams.” When pressed further they again downplayed any connection by joking that they don’t do much research.

Irregardless of their denials, there is an undeniably mix of satire and nostalgia for old Hollywood throughout Hail, Caesar!. I wonder if there might be something more going on, though.

It’s no secret that the type of mid-budget dramas and comedies the Coen Brothers make are a dying breed, and more and more of the directors they came up with have made the jump to TV. They acknowledged as much in their recent Variety interview. In that context, it’s not surprising that they would be drawn to Hail, Caesar! at this point in their careers. It’s actually a movie they’ve talked about making for over a decade, but I don’t know that if it would have always included a subplot involving a backslapper from the aviation industry attempting to tempt Mannix away from his beloved film company with the allure of more money and better job security. This rather pushy recruiter denigrates the film industry, claiming it has no future and ultimately produces frivolous hokum.

Elsewhere, Hail, Caesar! refers to films as capitalist product which reinforce the status quo and further the exploitation of the working class by the owner class. However, as the idiots and intellectuals alike around him try to tear the industry down Mannix is the ever vigilante true believer in the middle, the guy who is not blind to the winds of change (this being set at the dawn of TV) nor to the frivolity of it all (since it’s his job to hide the salacious elements from the public). However, he keeps at it because he genuinely loves the challenge and the final product.

In that reading, Mannix is a stand-in for the Coens, who similarly find themselves at a professional crossroads during a transitional time in the industry.

Or Mannix is just a standard Coens cowboy hero, and they have no emotional investment in any of this beyond a hunch that it might be funny to make a movie which fictionalizes ages-old Hollywood rumors (gay relationships, surprise pregnancies, etc.) and ultimately delivers an undercooked joke, “What if everyone back then really was [insert spoiler]?” Plus, why not throw in some half-baked jabs at religion? If so, they weren’t wrong because it’s most definitely funny, at least in the sense that there’s always something remarkably strange and so very Coens Brothers-y right around the corner. However, the jokes are a bit dull compared to their better efforts, and the satire is neither as biting nor as interesting as it should be.

Considering the talent on hand, it’s a shame that this amusing, but scattershot comedy is the best they could come up with. However, even with the Coens’ lesser comedies there’s usually a standout sequence/performance or two. Think the asthmatic assassin in Intolerable Cruetly, or Clooney and Pitt’s ill-fated meet-up in Burn After Reading. In Hail, Caesar!, it’s the moment Alden Ehrenreich’s singing cowboy tries to be something he’s not and quickly burns through Ralph Feinnes’ patience. That’s the scene I’ll remember.